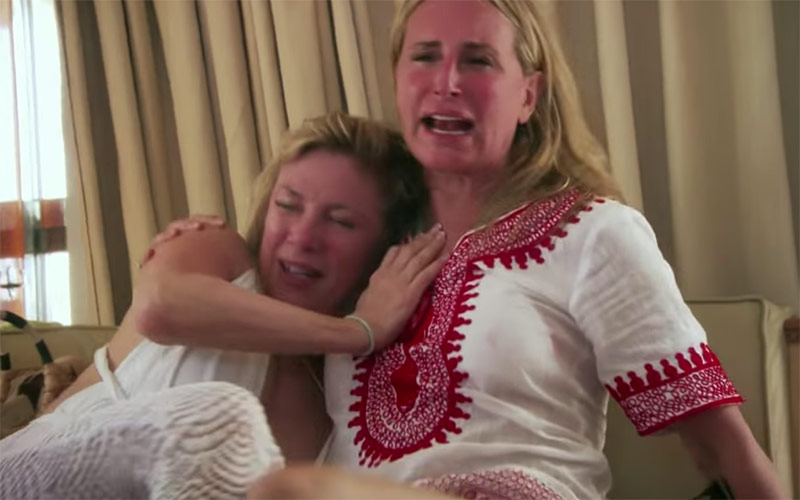 "This is like taking an airplane with one propeller. I just peed my pants," Sonja says as the now-infamous RHONY boat ride gets started.

At long last, The Real Housewives of New York City arrived at the point in the season where they’re not only on a trip, and trips are RHONY at its best, but were involved in some kind of boat disaster that we’ve known about since early this year.

Jennifer Lawrence said what most people watching RHONY were thinking when she told Andy Cohen, “I mean, I don’t want to say it. I don’t know if it’s a sore spot. But I’m really looking forward to that episode where the ship sinks.”

Indeed. And yes, finally, it was time!

And: there was no footage.

And: the editing just skipped ahead to the next day and everyone was packing calmly.

This group can’t even sit down at a table without getting into a fight, and they all survive the Titanic: Colombian Yacht Edition and they act like there aren’t cameras there waiting for them to pick petty fights?

There was some footage of the boat ride, starting when it was bobbing up and down in rough water, though Bethenny described 15-foot waves while the ocean footage shown looked like the waves I created in my bathtub when I was four years old and thought wallowing in my own watery filth was actually a way to get clean. But enough about how ridiculous baths are.

During the whole incident, the skies were blue, and several shots made it clear that there was a boat running alongside their boat. There is significant distance between Kalua, the private island where they spent the morning, and Cartegena, the setting for the previous days’ drama, so what took a few minutes on TV may have been going on for hours.

And it did not seem like something I’d voluntarily sign up for: Carole was puking, and Sonja was screaming, though honestly, when does Sonja not scream? Someone smelled smoke and chairs were sliding around on the deck.

Things were getting scary, and not just because Sonja said she peed herself.

But then the editing cut to black and this appeared on screen:

“Due to the rough waters, all production crew had to stop filming for the safety of everyone aboard.”

We’re a long way from 2001, when Mark Burnett said that one of his camera operators “would have been fired on the spot” had they stopped filming to help Michael Skupin after he fell hands-first into a fire. (Burnett really said that.)

The crew having to stop filming was a pretty good indicator of how rough the seas were, and how dangerous it was to be walking around. To stop filming at such a dramatic moment and get no footage at all?

That’s the reality TV equivalent of an airplane pilot asking the flight attendants to be seated. That’s when you know shit’s getting real.

But for something the show hyped and foreshadowed the whole episode, it was still a letdown to see none of the real drama.

“What’s this boat going to be like?” Carole asked at the beginning of breakfast. And after the Dorinda-Luann, and then Bethenny-Carole drama spilled into breakfast, she said, “Why don’t we cancel the boat trip?”

One of the best things about this season is how their alliances have shifted and there are new kinds of interaction. Dorinda is the villain! Carole won’t let Bethenny get away with her usual Bethenny thing!

Back to the foreshadowing. On the private island, Luann couldn’t find her cell phone and the show broke the fourth wall to let us hear a producer insist that she had to “get on board if you want to get home.”

As the water got choppy, there were no life vests and Ramona said, “Hello…I can’t swim.”

They even had the cast signal what was to come in interviews filmed later. “Someone’s going overboard,” Sonja said some time after she escaped yacht death and presumably changed out of her urine-soaked clothing.

Apparently, no one actually did go overboard. And we certainly didn’t get to see it.

Instead, we got a montage of the women describing what happened. Comical, sure—Luann describing the captain emerging with “two swords” and hacking off the anchor, which was being dragged for some reason, preventing certain death (“we would all have been killed”).

Like Jennifer Lawrence, I was looking forward to seeing this, to see what the reality of this experience was like. I justify that because I know everyone is just fine, and no one was hurt, and I was safe watching it on TV.

Plus, the whole thing developed comedically, so it didn’t seem truly life-threatening. Ramona was laughing at Sonja’s overreaction even as she clung to Sonja’s chest, and Tinsley was trying to convince Sonja that choppy water is totally fine and as normal as spending an afternoon trying on wedding dresses.

Carole said her time as a war correspondent in Afghanistan and Iraq “was nothing compared to what happened on that boat.”

She’s leaving RHONY, perhaps so she can devote her time to producing a documentary about what really happened on that boat, which I assume involved bombs and deaths and invasion of spaces.

Couldn’t the production just left the cameras rolling, or strapped GoPros to their heads? Oh well.

Even if we had seen it, I doubt that it would have been the scariest or most dramatic thing that happened this episode, an episode in which Bethenny was complaining at length about Carole when Carole actually sat down at the table SHE’S RIGHT THERE BETHENNY STOP OH GOD RUN BETHENNY RUN.