Skip to Content
Teams on BYUtv's Relative Race have to give up their cell phones as they drive across the country and meet people they're related to. (Photo by BYUtv)

In this edition of The Confessional, Aaron Hayes writes about discovering two on-demand reality shows—BYUtv’s Relative Race and Netflix’s Churchill’s Secret Agents: The New Recruits, known as Secret Agent Selection: WW2 when it was first broadcast on the BBC—that made for great family viewing, and taught him something about humanity.

About a year and a half ago, my reality-show-producer-wannabe son and I were looking for something new to watch as it was between seasons for most shows. Given his future career choice, we watch a lot of reality TV, and while at 16 he can handle most shows, I appreciate reality shows that aren’t trashy or degrading.

As our search was digging up little, we downloaded the BYUtv app on our Xbox. It was a TV option we hadn’t exhausted, and we’d seen the Scott Sterling’s amazing sports exploit videos on YouTube, which were made as part of the BYUtv’s sketch show Studio C.

In scanning through the shows, we stumbled upon the Relative Race. We figured we’d give it a shot and if nothing else, it would build the future producer’s background on what does and doesn’t work.

The show has an Amazing Race feel to it. Four teams of two family members, each wearing a different color, are sent on a journey across the USA.

Personal smartphones are gone—only maps and burner flip phones in rented cars. The difference is that each pair is taking a different path on their way to winning $50,000.

But the real prize is seeking out relatives they haven’t met yet on their race.

How are the relatives found? Producers use information from AncestryDNA and other sources to set a path for each team to travel across the United States.

Since teams are going in different directions, each leg is measured against an ideal time. The team who goes over that time the most gets a strike. Three strikes and a team is sent home. The racing part is fine—teams driving, and teams doing tasks that have improved over the three seasons.

Teams drive themselves to a new town, completing one challenge (season 1) or two (seasons 2 and 3), and then they’re off to find the family with whom they’ll spend the night.

The first task is always the same for all teams. The second task each day in season two, the producers created tasks that were related to the person the teams would be meeting. That makes the transition to the relative part of the show smoother.

Then the fun begins. Teams find out how they are related to the new people in their lives. And then teams are shown sharing a meal, going to a fun event that is important to that night’s family (such as a comic book convention), and talking about the commonalities the two families have.

What started in Season two and comes home in Season three is particularly powerful.

Some teams meet lost siblings from their parents’ previous marriages. There’s a woman whose mom died when she was a toddler and barely remembers her mom’s family. Another man had been adopted as a child 40-plus years ago but hasn’t been able to find his birth family.

Given the weariness of traveling eight-plus hours a day and being under the clock like the Amazing Race, emotions are raw and open, and you get to see an amazing side of people filling in the gaps.

While I don’t have gaps in my family background, one of our children is adopted. He has contact with both of his birth parents and has been able to get questions about his background and their current families.

I know how much that has given him, so watching people fill in the gaps they’ve longed for, I can relate to their pain and joy and find myself thankful for what we have.

An organic focus on religion

When I’ve talked with friends about the Relative Race, given it’s connected to BYU the first question that comes up is, “How Mormon is it?”

I equate it to Mike Rowe’s show Somebody’s Gotta Do It airing on TBN. The only time religion comes up is when the contestants talk about it.

In a podcast about the show (at 28:38 in the podcast, there’s a fascinating look at a producing a reality show), host and executive producer Dan Debenham says that BYUtv told them not to go out of their way to cast Mormons on the show.

“This isn’t a Mormon show. It’s a show about finding family,” Debenham says, adding that BYU’s standards don’t allow swearing, smoking, or drinking so you won’t see either. It happens, but it just isn’t shown. There’s no bleeping; the scene just isn’t included.

All three seasons of the Relative Race are available on the BYU apps and on the BYU website; season 4 premieres this fall.

Your neighbors, learning to be special agents 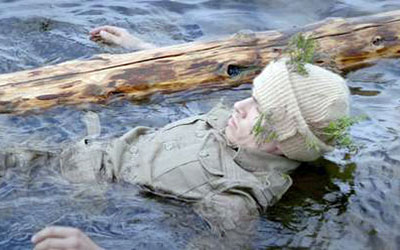 A scene from Netflix’s Churchill’s Secret Agents: The New Recruits.

A very different but just as intriguing side of humanity is shown on Churchill’s Secret Agents: The New Recruits, which just was released on Netflix. (It originally aired on the BBC as Secret Agent Selection: WW2.)

It’s based upon the training program for the Special Operations Executive (SOE), an organization formed by the British government in 1940 to identify and train British soldiers and civilians to be inserted behind German lines during World War II.

Churchill’s Secret Agents takes a group of 14 men and women and puts them through the selection process for the SOE.

The setup is similar to History Channel’s The Selection or Discovery’s Out of the Wild: No prizes. No guaranteed eliminations. If you can make it through the process, you’ve made it to the end of the show.

Recruits are taken to an estate in Scotland in period dress and come from all walks of life: a doctor, a recent college graduate, a grandmother, former military including an amputee. (This was identical to the types of people the SOE looked for in the 1940s.)

They’re put through a four-day selection process to see if they have skills that the SOE can use. Those who make the cut are then put through additional training in things from fighting to survival to radio usage. At any time, a recruit can be removed from the training—or remove themselves.

It’s thrilling to see people like your neighbors excel at climbing hundreds of feet up a mountain or learning how to pick a lock in only a few hours.

But the brilliance of the show is that as the recruits go through the SOE selection process, the show interjects documentary-style footage of SOE operations and tell of what danger these British and European ex-pats from invaded countries put themselves in by joining the SOE.

The men and women who were inserted into Europe during the war were up against incredible odds. Some were killed and some did amazing things. Editing and writing really moves the show from a good show to something that is both entertaining and very enlightening.

Churchill’s Secret Agents is currently airing on Netflix. While it’s rated TV-MA, the only reason I can see is for an occasional “shit” being uttered by contestants once training starts. If you’re a frequent watcher of British TV, you know that that particular word is used with more frequency and doesn’t seem to carry the same weight as it does here in the States.

Like most genres, reality tv covers a wide range of shows with some being heartening and others being trainwrecks. Most of reality tv gets lumped into the trainwreck category. But there are times it can have a real, worthwhile impact and not be just to watch to escape or as a guilty pleasure.

Relative Race and Churchill’s Secret Agents give very different but worthwhile insights into humanity. Seeing people find out about family that they didn’t know existed and making connections that while quick feel reminds us of how important those types of relationships are. For me, it helped me appreciate what my son has as a person who knows his birth-parents.

Seeing everyday people push themselves to prepare—in theory—to fight for their country reminds you that when needed, you can do things that are beyond your comfort level if you try.

Next time I hear I’m not sure I can do that in my head, hopefully I’ll think back to the two weeks these contestants pushed themselves.

Both shows left me with a feeling that I need to remember those parts of my soul more often than I do. It’s too easy to become complacent these days, just doing what we normally do.

If you need a little restoration of your faith in humanity, you owe it to yourself and your family to put these two shows into your queue.