The winners of the 34th annual Television Critics Association awards were announced last night, and Netflix’s Queer Eye and CNN’s Anthony Bourdain: Parts Unknown were the winners in the two unscripted television categories.

In his acceptance speech, Rob Eric said, in part:

“When started to think about whether or not we should bring the show back, two things scared the living hell out of us: One, could we create a cast of Fab Five again that were just as unique and dynamic as our first Fab Five? And two, the critics … It was the critics who actually inspired us to think more about how we were going to tell this story—do something different, create a bigger, bolder show. It was you who inspired us to think outside the box. So, thank you for that. We truly want to thank you. And we want to say, please, keep inspiring us to create bigger, bolder, better television.”

Parts Unknown director and producer Morgan Fallon accepted for the CNN series, which won in the news and information category, and said, in part:

“I spent nine years traveling with Tony, directing, shooting and producing Parts Unknown. It was the greatest gift of my career. … At the core of what I think he did, and what I hoped we helped him do, was walk through any door, sit at any table with the same humility and respect, no matter who he was sitting across from. We need that more now than ever before. It’s a tremendous loss. He taught us to be curious, open an empathetic. And we will all miss him greatly.”

I presented the award for outstanding reality television program to the show alongside my friend Damian Holbrook from TV Guide Magazine, and we wore pride t-shirts.

Echoing things I wrote about in my review of the Netflix series, I said, “This reboot of a groundbreaking series is about much more than tips for how to be better. It’s the show we need right now: one that leads with empathy and compassion, and leaves us both crying and laughing.”

Damian joked, “Just like gay people! What makes this reality TV show stand out is its inclusive heart, and its acceptance of all people. It’s not just about the straight guy any more.”

Winners were chosen by a vote of the 250 or so members of the Television Critics Association, of which I’m a member (and now a member of its board of directors, as of an election yesterday).

The awards, which are not televised, were hosted by Robin Thede, who joked about many things—including the cancellation of her BET show The Rundown with Robin Thede.

Norman Lear introduced Rita Moreno, who received the lifetime achievement award and talked about her more than 70 years in entertainment—she’s a member of the EGOT club—and how she still struggles with a desire for approval, just as she did when she was a kid. 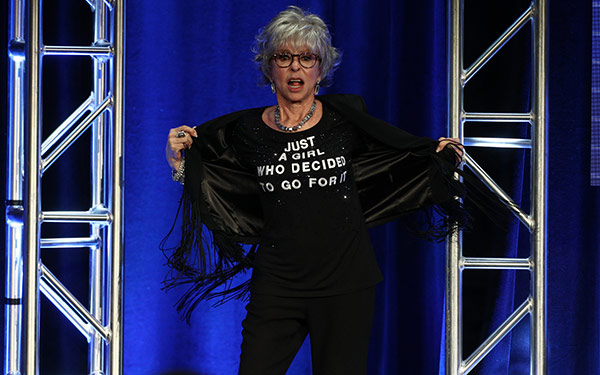 Rita Moreno shows off her “Just a Girl Who Decided to Go For It” t-shirt on stage at the Television Critics Association awards, after receiving her lifetime achievement award. (Photo by Frederick M. Brown/Getty)

Friends won the heritage award, and other awards went to Killing Eve, The Good Place, The Americans, and Sesame Street.

In a press release, TCA president Daniel Fienberg, said, “This year’s TCA Awards offered the welcome opportunity to say goodbye to one of the era’s most critically acclaimed shows in The Americans, a drama that combined espionage thrills, high emotional stakes and international intrigue that couldn’t have been more current. … As we always say, TV offers something for every audience in 2018 and if you can’t find anything to watch, you’re not trying hard enough and you need to read some more TV critics!”

The nominees were announced in June. Here are the winners, who received their awards last night: