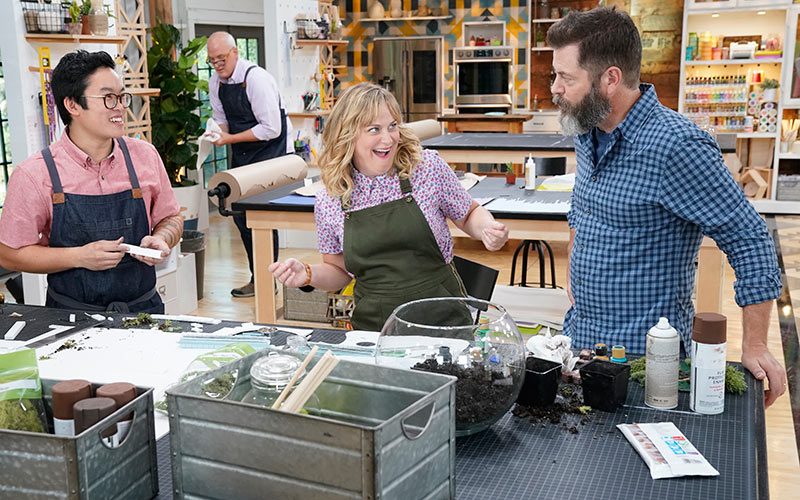 Making It contestant Khiem Nguyen with hosts and Amy Poehler and Nick Offerman in episode 2. (Photo by Paul Drinkwater/NBC)

Amy Poehler and Nick Offerman have done wood work, as their wonderful, joyous crafting competition Making It has been renewed for a second season. Viewers like me are crotchet hooked on this NBC knit-work competition.

This is especially good news with The Great British Baking Show ending its run on PBS last Friday, as Making It shares a lot of the same DNA with GBBO. (Read my full review of Making It.)

Making It season two doesn’t yet have an air date—but season one is still airing, and half of the season is still to come.

Among those watching within seven days, they’ve had an average 1.4 rating in 18-49 and 6.3 million viewers, ratings that NBC says are “making it the #1 most-watched premiere of a new summer series on the Big 4 networks this year and tying it for #1 in adults 18-49,” plus “winning across every key demographic” during its timeslot.

NBC was also thrilled with digital viewership, including people watching on Hulu.

Clearly, the show’s combination of talented people and Amy and Nick’s witty, warm hosting has resonated. The puns are wonderful, too.

“We set out to make a boundlessly affirmative and inspiring show and we are thrilled with the way viewers and the press have embraced it. Amy and Nick bring creativity, leadership and comedic brilliance to everything they do and we can’t wait to team up with them again and shine a light on a new group of talented makers.”

“Seeing firsthand the imagination of a true craftsman and, literally, watching them create something out of nothing is pure gold. Amy and Nick’s longtime friendship and affection for one another brings the show to a whole other level of fun and we look forward to seeing what season two will bring.”

“We’re sew excited to be Making It again. We promise season two will have you glued to your seat.”