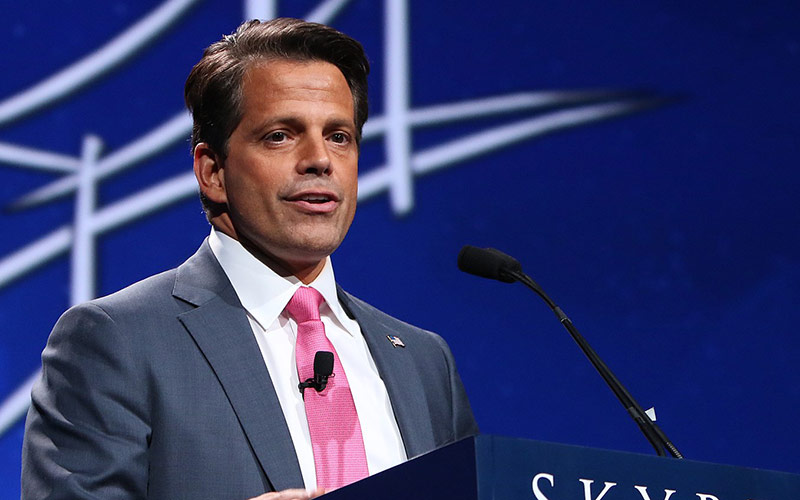 Anthony Scaramucci at the SALT Conference in 2016. (Photo by Jdarsie11/Wikimedia Commons)

Page Six’s Richard Johnson reported yesterday that “Anthony Scaramucci couldn’t sell a TV talk show, The Mooch’s Table, even though he revealed on its ‘sizzle reel’ that he was a bed-wetter until he was 11.”

There is a sizzle reel for a show starring Scaramucci—who served as director of communications in Donald Trump’s White House for 11 days last summer—but it’s neither a talk show nor has it failed to sell, its producer told reality blurred.

“We’re early in the process. We’re in active conversations about the series with multiple outlets,” producer Jay Blumenfield, of production company The Jay and Tony Show, told me. “It’s certainly not dead, and it’s the opposite of no nibbles.”

It doesn’t look like a talk show, and seemed to me to resemble Showtime’s The Circus, which includes segments in which its hosts interviewing newsmakers, often over a meal.

This morning, Jay and his producing partner Tony Marsh discussed the Page Six article on their podcast, which is called The Jay and Tony Show Show. Page Six cites “a Scaramucci spokesman” who said “the show didn’t go anywhere. It just didn’t sell.”

Jay Blumenfield told me that “it’s just frustrating when the info is wrong—we just started to talking to people. How is this even possible? I don’t know who’s sending clips of our sizzle out to gossip reporters,” though he added that “it was kind of cool to get kind of a good review of something” that was never intended for public consumption.

Page Six’s clip is just a brief part of the sizzle tape, which itself is short: about three and a half minutes or so. The foundation is something that already happens: Scaramucci has a table at the restaurant labeled “Mooch’s table,” where “he holds court with people you never expect,” Blumenfield told me.

But those conversations, and what’s on the sizzle tape, are “just a taste of what it could be.” And like any sizzle tape and pitch, it may or may not attract a network who wants to develop it into a pilot or a full series.

Mooch’s conversations could be just “an element” of an eventual documentary series—or they could be the entire show, with producers having “shot it the night before we aired it” and then “turn[ed] it around super-quickly,” Blumenfield said. “One of the things we’re doing with some networks is just sitting Anthony down with people” so network executives can see the “eight other sides to him that could come out.”

When I mentioned that it seemed like The Circus, he said, “We actually had talked about The Circus as a point of reference” because it “feels like you’re getting a window into what’s going on.”

“Scaramucci is not at all what I was expecting from knowing him on TV to who he really is and what he’s really about. He’s super-compelling as a person,” Blumenfield told me. “He really does want to bring people together, which is not what I got from seeing him on TV like everyone else.”

In the podcast episode, Tony Marsh says something similar:

“You shouldn’t judge a book by its cover, and the Mooch—you can have strong feelings about him, and you certainly could have strong feelings about him working for this president—but when you see him talk, when you hear him tell stories … He shared a painful childhood memory. He’s not just the blowhard dick that you think he is, and having different sides come together around a dinner table  is a really good thing to have out there: It’s a good message, it’s a good visual, it should be good TV—if we get to do it.”

The conversation about Mooch’s Table starts at 11 minutes into the podcast, after a discussion of testicles: