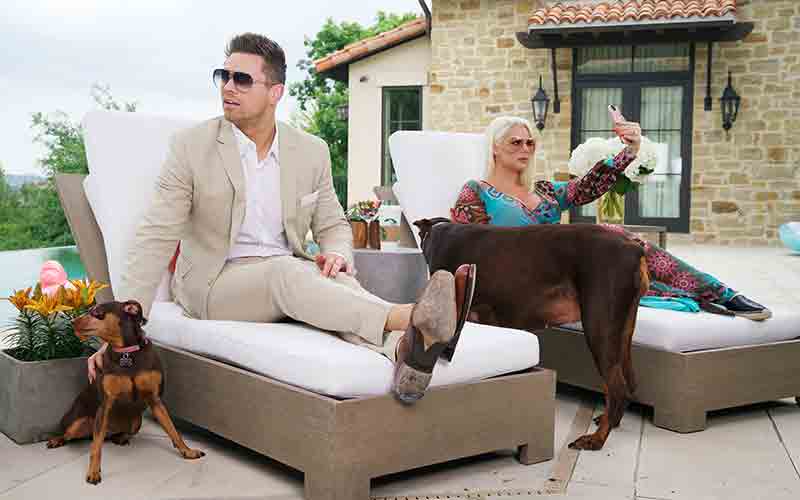 Miz & Mrs, the series that stars professional wrestlers and married couple Mike “The Miz” Mizanin and Maryse, has been renewed for 14 additional episodes, which they announced on WWE’s Smackdown Live last night.

In a video shot by the couple, Mike says “the USA Network has picked up another season” even though the six-episode “first season isn’t even done airing yet.”

A total of 14 new episodes will air next year—though notably, USA’s press release does not call this “season two” or mention “another season.” Instead, it calls them “additional episodes.” Perhaps that’s because Hollywood loves expanding and breaking apart single seasons to avoid negotiating new contracts.

USA Network said in a press release that Miz & Mrs. is “USA’s top unscripted launch in more than seven years,” with an average of 1.7 million viewers across the first three episodes.

Considering that the network’s other big reality show, Chrisley Knows Best, debuted four years ago, Miz and Mrs is obviously doing better ratings at its start.

Like Chrisley Knows Best, however, the show seems to stretch the definitions of reality TV, and perhaps belongs more in a category with pro wrestling: real physicality, fake plotlines.

While all reality TV is produced and edited, that doesn’t mean it’s “fake” or “scripted,” though those words are thrown around a lot. A truly scripted show would have pre-planned scenes and even lines, like a sitcom or drama.

But genuine reality can be overproduced and come off as fake: just look at Big Brother’s Diary Room segments, where the producers sometimes have houseguests repeat things they’ve until they no longer sound genuine.

So is Miz and Mrs an unscripted show? Its star basically said: definitely not.

Is Miz & Mrs scripted and staged like the WWE?

USA Network frames the series as a kind of documentary:

“Miz & Mrs gives fans an unfiltered look at the power couple’s lives as they adapt to becoming first-time parents while juggling their fast-paced lifestyle, a cross-country move from Los Angeles to Austin, and the intense demands of their WWE schedule. From baby first-aid classes and pregnancy photo shoots to big showdowns at WrestleMania, Miz & Mrs proves that the outrageous in-ring personalities of The Miz and Maryse are no act.”

Mike—who has lots of actual reality TV experience, from The Real World to Tough Enough—doesn’t seem to view it that way.

In a recent interview, he attempted to describe it by first throwing out some terms:

I don’t know what all that means, because all of those words essentially describe the same thing. So that sentence reads to me like: This isn’t a sandwich. This isn’t a hoagie. I look at it more like a sub.

And then The Miz gives examples of what his show is like: scripted sitcoms.

“I also look at it as a Curb Your Enthusiasm, an Office, a Modern Family.”

So to recap, it’s a “docuseries” that’s exactly like fictional sitcoms—two of which are filmed as if they’re documentaries.

Perhaps because this is getting very confusing, Mike then says to not think about it:

Clearly, enough people have done for Miz and Mrs to earn another 14 episodes—and probably many more seasons, too.