Watching someone try to turn an idea into a tangible thing makes for good reality TV, whether that’s an entree or a 90-day fiancé.

Watching someone take an existing thing and try to evolve it into a better, bigger thing—well, that’s also great TV.

That’s what’s on offer from Million Pound Menu, a six-episode BBC Two series that’s now on Netflix. Hopeful restauranteurs have a chance, over three days, to take their existing businesses to the next level.

The format of Million Pound Menu is simple: People have three days to test their idea for a restaurant—and also to convince investors to buy into their concept for a restaurant that could be on the high street.

British colloquialism tangent: When I started watching, I inferred from context clues that “High Street” was a place in London. Not really. I’ve since learned, through research (I Googled) and consultation with an expat (I asked a friend), that the high street is both a generic and sometimes proper noun that refers to the central street in a town, which may or may not be literally named High.

In other words, these investors—who come from a variety of different perspectives—are looking for restaurant concepts that can exist anywhere, in high-traffic areas.

The entrepreneurs are not starting from scratch, though; all of them have existing food businesses, whether it’s take-out produced in their home kitchen or booths at festivals.

And there’s quite a range of cuisines, from vegan Thai (the brilliantly named Greedy Khao) to cookie dough (Naked Dough) to pasta swirled in a huge cheese wheel (The Cheese Wheel).

Three days to try something new

Their first day is a dry run, when they open their restaurant to the public. Host Fred Sirieix stops by, tries the food, and offers feedback and encouragement. He does a lot of narrating and contextualizing, and that’s useful, but he’s best when chatting with the entrepreneurs.

The show skips over all of the menu planning and interior design; that’s happened off-camera, so they show up and there is the restaurant, with the decor they’ve chosen.

The show was filmed last November in Manchester at Spinningfields, and uses the same two spaces in each episode, so it’s fun seeing wildly divergent concepts manifest in the same boxes.

On day two, potential investors first try the food—which may or may not have changed based on feedback from day-one diners—and then meet privately with the entrepreneurs to discuss details.

The restaurant opens one more time on day three, when the investors come to observe and see how functional the team and concept are, and what feedback—if any—the team has incorporated. And then the investors decides whether they’re going to make dreams come true, or walk away.

Most of this unfolds at a perfect pace. 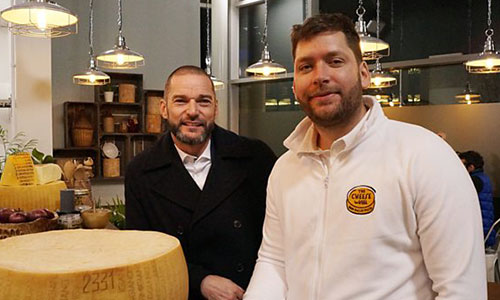 Million Pound Menu debuted on BBC Two in May, and came to Netflix in the U.S. shortly after it finished its run there. It was quickly renewed.

Each episode follows two restaurant concepts, but they’re not in competition. And they may have one or four investors interested. At the start of each episode, a panel of potential investors watches pitch tapes and decides if they want to join in or not.

This is not a show that places arbitrary rules over reality. So when just one investor is interested, that’s as watchable as when four investors are potentially competing with each other for a stake in a restaurant concept.

Million Pound Menu does have less clarity than I’d like with the investment offers and pitches. Shark Tank has trained me to be an expert in such matters, so I’d like a few more details.

There’s certainly time for more discussions of numbers and offers. That’s because, in its most American reality show moments, Million Pound Menu makes its participants sit and wait for one hour to see if an investor (or investors!) will return to make them an offer.

That happens at the end of day three. Fred Sirieix is there with them, ready with champagne in case things go their way, but it’s still a slog.

With the extensive shots of a clock, and an unopened door, and an empty chair, it tries too hard to squeeze drama out of an arbitrary deadline. That time would be better filled with information or follow-ups to see what happened after the show.

But that’s a small quibble. The rest remains fascinating: people adapt their concepts and make changes based on feedback; investors ponder what works and what doesn’t.

Each investor values different things, of course, and sometimes have wildly different ideas of what they want. Some entrepreneurs are stubborn; others are amenable to everything.

Some get in their own way; some take full advantage of the opportunity. All of them have entertaining journeys.

The best part of Top Chef‘s restaurant wars is watching chefs try to deliver on a concept, and that’s the entire show here, just replacing the peripheral drama and competition with real-life stakes.