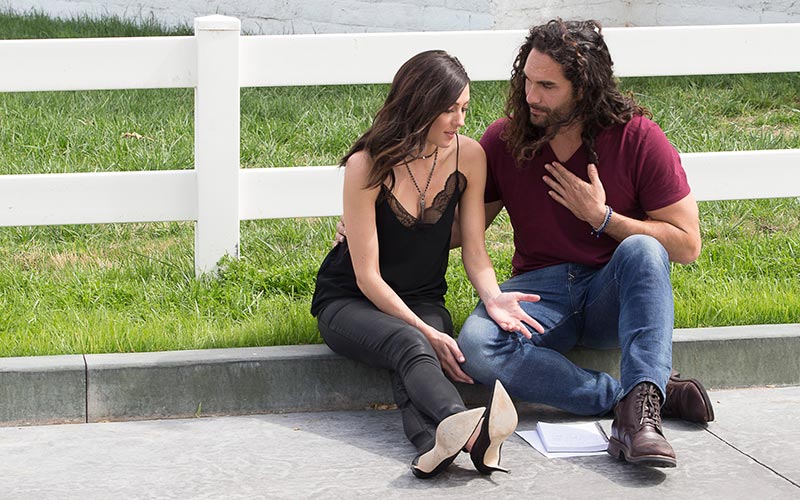 Leo Dottavio, right, on The Bachelorette season 14 with its star, Becca Kufrin. (Photo by Paul Hebert/ABC)

The Bachelorette season 14 and Bachelor in Paradise season 5 cast member Leo Dottavio has been accused of sexual misconduct involving several women, which he responded to by writing, “I am not a perfect person” and suggesting women should have talked to him if they felt uncomfortable with his behavior.

ABC and production company Warner Bros. both declined to comment when The Hollywood Reporter asked.

This is the latest report of problematic behavior from Bachelorette contestants this season:

Thursday, Bachelor season 22 contestant Bekah Martinez shared screenshots of social media messages sent to her from other women, including this one, which has been archived by Just Jared:

“He constantly pursued my friend, who made it very clear she was in a committed relationship. Sent her multiple, unwanted dick pics.”

“You need my big dick”

In messages with Bekah, Leo claimed one screenshot was “photoshopped.” Bekah’s sharing of those messages prompted some ugly attempts at retaliation, which she also shared.

Leo responded with this formal statement on Friday, according to THR:

“There have been some recent stories about me that have garnered attention and I want to address them. I want to start by saying no one has ever accused me of sexual harassment. No one has ever come to me in any way and told me I made them feel uncomfortable. However, I am not a perfect person nor have I ever claimed to be.

Did I do things in college that I would be embarrassed about now? Absolutely. Was I a part of my culture, the times, movies? Yes. I have grown as a person since college. I am not the man I was two years ago, let alone 14 years ago.

“I know Leo is not a rapist or a ‘serious’ abuser, but the way he’s handled this situation:

are all perfect examples of the toxic culture we live in that silences real victims and gives real abusers power.”