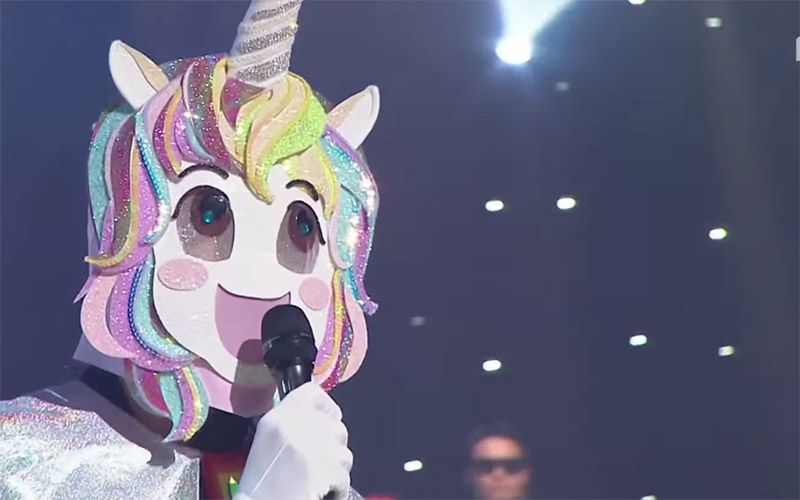 A moment from South Korea's competition show King of Mask Singer, which Fox is adapting as The Masked Singer.

Fox also announced a game show called Spin the Wheel, which will be hosted by Dax Shepard and produced by Justin Timberlake, which sounds like a combination of NBC’s The Wall and Wheel of Fortune.

The Masked Singer “features celebrities facing off against one another with one major twist: each singer is shrouded from head to toe in an elaborate costume, complete with full face mask to conceal his or her identity,” according to Fox.

Fox has a thing for masks, from The Masked Magician specials to the Monica Lewinsky-hosted reality competition Mr. Personality.

The show, which will air in January 2019, is an import from South Korea, where it’s known as King of Mask Singer, and has aired four seasons so far. Fox’s reality TV executive Rob Wade called it “truly one of the most unique, genre-defining formats I’ve ever seen. It’s a massive international hit, and its boldness and originality make it the perfect fit for Fox.”

The judges will try to figure out the celebrities’ identity, and eliminate one singer a week. They are Ken Jeong, Jenny McCarthy, Nicole Scherzinger, and Robin Thicke. Nick Cannon is hosting.

Here’s a preview of the Fox version:

The concealed contestants will apparently be impressive competitors:

“Between all of the celebrity competitors on the show, they’ve amassed 65 Grammy nominations, 16 multi-Platinum albums, 16 Emmy nominations, nine Broadway shows, four stars on the Hollywood Walk of Fame and four Super Bowl titles. With each performance, the host, panelists, audience, viewers and even the other contestants are left guessing who is singing behind the mask.  The singers may attempt to throw the crowd off of their scent, while keen observers might pick up on tiny hints buried throughout the show. One singer will be eliminated each week, ultimately revealing his or her true identity.”

It will be produced by Endemol Shine North America, and Smart Dog Media’s Craig Plestis, who produced NBC’s Minute to Win It

An obstacle course game show or something

Fox will also air Mental Samurai. What is it? I have no idea, even though I read the whole press release. See if you can decipher this description:

“Each episode of Mental Samurai is an epic television event, as contestants battle the boundaries of their minds to answer questions accurately with speed and precision. Not only does the course test their acumen in categories of knowledge, memory, numbers and sequencing, but players will also have to contend with being transported around the set at high speeds in a specially designed capsule that is capable of rotating 360 degrees. In Mental Samurai, people from all walks of life will compete, new stars will emerge, underdogs will triumph and egos will be shattered in the ultimate display of skill, focus and stamina.”

Rob Lowe offered no help with his quote:

“When I was 15, I won big on The $10,000 Pyramid. I’ve loved mental competition shows ever since. For me, Mental Samurai is addicting. Every time you play, you think: THIS time I’m gonna win! But this very simple game is almost impossible to crack. Also, as a producer, I’m excited to get into this new arena.”

The show—which is also described as “a thrilling new competition series that pushes every aspect of human intelligence and mental agility” and an “obstacle course…for the mind”— comes from Mike Darnell and A. Smith & Co. Productions (which produces American Ninja Warrior and Hell’s Kitchen, among other shows).

Meanwhile, Spin the Wheel—which comes from Timberlake and Andrew Glassman, who’s behind NBC’s The Wall—will air sometime this year.

It has “life-changing opportunities to win fortunes each episode with the spin of a massive, unpredictable wheel,” according to Fox.

Here’s how a press release described the show:

“A suspenseful, high-energy mix of pop culture trivia, strategy and simple whirling luck, Spin the Wheel pits contestants against a colossal, spinning 40-foot wheel that holds incredible sums of cash prizes in its rotation. Throughout the game, players will answer trivia questions – each correct answer adds more extreme amounts of cash in the wheel’s wedges in a strategic location of their choice, while each incorrect answer adds more dangerous wedges that could instantly bring their total back to zero. With massive prize money on the line, contestants must make sweat-inducing, gut-wrenching decisions: whether to walk away or risk it all to Spin the Wheel one last time.”