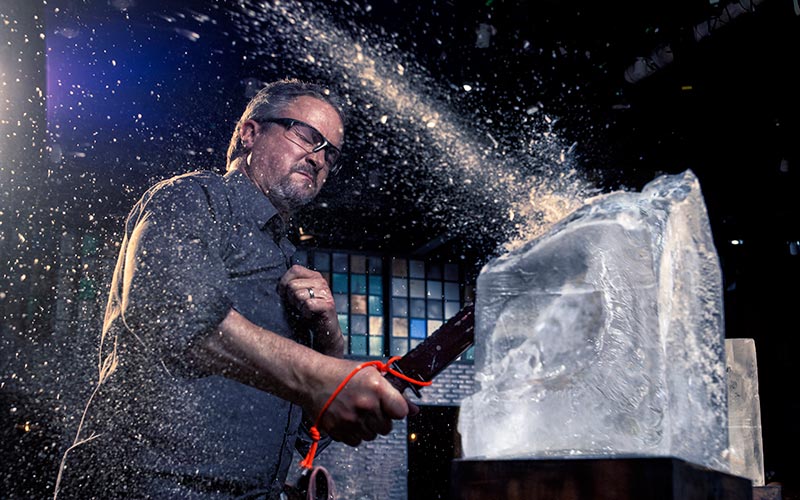 Forged in Fire judge J. Neilson tests a weapon on a block of ice. (Photo by Miller Mobley/History)

Do Forged in Fire contestants keep their weapons?

Here’s the question I always wonder about. On Forged in Fire (one of the best competition shows out there, IMHO), what happens to the weapons when the show ends?

Is there just some kind of warehouse somewhere full of fancy swords? Thanks, Andy! —Rebecca

Forged in Fire, which has been on the air since 2015 and is currently in its fifth official season, is like Chopped for weapon-making.

But instead of producing creative dishes in a kitchen, the contestants produce blades and weapons in “The Forge,” the show’s workshop.

In the first round, four contestants are given a set of criteria and have to create blades, which are then judged by a panel of experts: J. Neilson, Doug Marcaida, and David Baker, with former contestant Ben Abbott subbing for Nielson. They eliminate contestants whose work isn’t sufficient.

In round two, the three remaining contestants refine their blades based on that feedback, and also create handles to turn their blades into functional weapons.

In the most fun part of the show, those weapons are then tested in different ways, cutting through and into various objects.

While that’s awesome, what happens to those weapons is also impressive.

What does Forged in Fire do with the weapons? Do the contestants get to keep their swords or whatever they’ve made?

After the episode airs, the losing contestants actually get their weapons back. (The production holds on to the weapons until the broadcast.)

A History Channel spokesperson told me that “as a symbol of our gratitude and out of respect for the amount of work put into the weapon, we return it to the creator.”

The winner, however, does not get to keep their weapon. The spokesperson told me “the winning weapon is vaulted and used for display on our ‘winners wall’ and in various other places.”

Why are Worst Cooks on Food Truck Race?

There’s a team on this season’s Great Food Truck that met on season 12 of Worst Cooks in America. How can 3 ‘terrible cooks’ all of a sudden be able to run a food truck? Granted, one of them went to the end, but something smells fishy about this…pun intended. —Chuck

I haven’t watched this new season, but I think The Great Food Truck Race gave up on actually being a food truck competition long ago.

After the first two seasons, the show stopped casting professional chefs and food trucks owners who actually knew how to operate a food truck (though it reverted to that format in 2015 for season 6).

While it may not make sense to have bad cooks as cast members on a cooking competition, that makes just as much sense as casting Vinny from Jersey Shore in season 7.

In other words, like all reality TV, The Great Food Truck Race is cast primarily for personalities. I’m not convinced Worst Cooks cares about having bad cooks—especially in its celebrity seasons. What matters is casting people who viewers will watch.

Sharon, Kevin, and Steven were all on Worst Cooks in American season 12, and Sharon told Food Network, “It awakened something in the three of us that we never thought we had.” So either they learned something or weren’t that bad to begin with, or it just doesn’t matter because bad cooking will at least yield some drama.

It does seem ridiculous when shows don’t live up to their titles, but I totally understand why the network would take popular contestants from one show and put them on another, just as MTV’s The Challenge does, and just like CBS is doing with The Amazing Race season 31, which is a crossover with Survivor and Big Brother.

When is The Last Alaskans coming back?

Is The Last Alaskans coming back in 2019? —Phyllis

No, it’s coming back sooner! The Last Alaskans is returning in 2018.

Discovery Channel has not yet announced an airdate for the show, so it’s possible that could change. But the plan is right now for The Last Alaskans season 4 to debut this year.

Do you have a question about reality TV?

Ask me! I’ll do my best to answer.