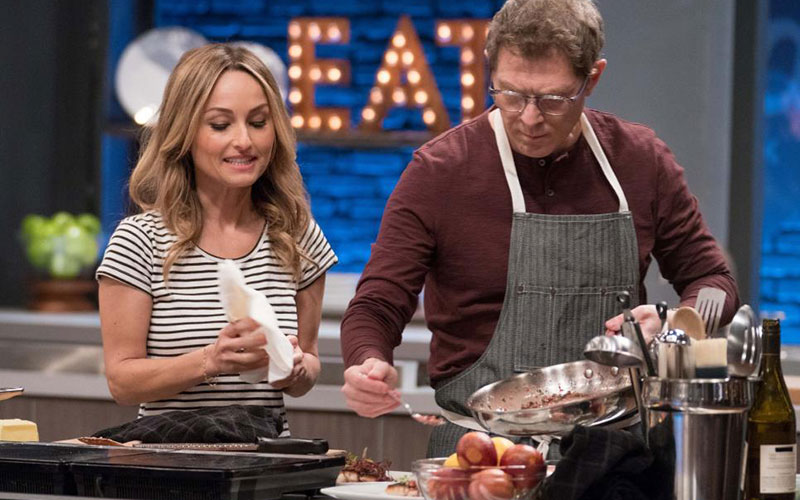 I’m a fan of cooking competitions. They are—forgive the lame analogy—reality TV comfort food, whether it’s Top Chef or Chopped.

While I’ll frequently watch one of the many Food Network competitions, they’ve become increasingly  similar and flat. So many of their prime-time shows are essentially the same: a chef with a name, a group of contestants competing in challenges, a panel of judges…

They’re watchable, yes, but also forgettable. I rarely write about shows that I used to cover regularly, such as Food Network Star, because most of those shows just sort of evaporate for me after I’ve watched.

And then came Netflix, which is starting to churn out reality TV, but it’s a wide range, from Chef’s Table to Nailed It! Those shows left me wanting more, and feel new and fresh. As I wrote about Chef’s Table, it “rediscovers the soul and passion in food TV.”

For New York Magazine’s Grub Street, I dug into the differences between the two approaches. That story is here: Can Food Network Survive in the Age of Netflix Cooking Shows?

I interviewed two Netflix food TV stars, Nicole Byer and Samin Nosrat (whose show based on her book is coming this fall).

I also talked to the person who literally wrote the book about Food Network, who has criticism for its programming, and to the executive in charge of the network.

That executive, Kathleen Finch, oversees all lifestyle networks at Discovery, which just acquired Scripps Networks, including Food Network and HGTV.

When I asked about Food Network’s approach to reality shows, I appreciated her candor in her response:

“Our job is not to teach people how to cook. Our job is to make people want to watch television. When we find talent that works, when we find a format that works, the viewers tell us through ratings, and then we just keep making more of it.”

She elaborated in a quotation that didn’t make the piece:

“What we need to do at Food Network at night and prime is entertain people. That’s why we have competition shows. We have shows that have a big payoff at the end because you’re not gonna necessarily watch somebody cook a meal after you’ve eaten your own meal. We sort of have a big entertainment focus at night on Food Network. But then, during the day, and on Cooking Channel, it’s a little bit more instructional. It’s Ina Garten, it’s Ree Drummond, it’s people who teach you and inspire you how to make a meal. But at Food Network, it is more about entertainment. You know, food is at the center of anything that we do. We don’t veer away from that, but we’ve got the highest co-viewing in all of cable, and one of the reasons that we do is because the whole family can sit around and enjoy the network together, which is really important to us.”

Another point that didn’t make it into my final story was this, in which she talks about people being inspired by the network’s programs, even if they shows aren’t trying to teach their viewers:

“I have three young daughters in their 20s. More and more, when I meet their friends, what they will say to me is, Oh, my god. I learned how to cook by watching the Food Network. That’s a really nice thing to feel like we’ve done. That’s never been our goal, but when you look out at the generation of young people that learned how to cook, learned how to enjoy food, maybe wanna be a chef, it’s really inspiring, and I think that’s one of the things that makes us feel really good at Food Network.”

This approach seems to extend beyond Food Network and to its sibling networks.

So, at a Television Critics Association summer press tour press conference with its network executives, I asked Discovery Inc. president and CEO David Zaslav “where the factual line is for you, and how much you’re going to lean into entertainment versus factual—because I think on some programs on each network would strain the definition of nonfiction, even though you call them nonfiction.”

Zaslav said, “we use real-life entertainment really as a broad lens,” and then cited Eurosport, which broadcasts live sporting events as an example.

He then deferred to Animal Planet’s Susanna Dinnage, who echoed what Finch told me for the story. Dinnage said:

“Yes, we never, ever forget that when I look at that screen, we’re here to entertain. We are in the world of entertainment. That’s what broadcast is and that’s what content does. And it’s just our way of entertaining people. For me I look at the world of animal content, we’re not here to make people feel guilty, bad, sad, depressed, and hopeless. …

We never forget that people are tired when they come home, they put the screen on, what are we all gonna watch tonight? We’re not asking a lot of people; we’re here to give. And I think we always have to remember that and how we entertain in our own ways is quite different, but we must never forget that’s what we’re there to day. But you can have both.”