Review: ABC’s Castaways, a survival series with shades of Survivor, Lost, and Alone

Watching ABC’s new reality show Castaways is like being in the front of a canoe, gliding through open water water, surrounded by sky and trees and possibility.

And then, just as the breeze picks up, and the paddling gets in sync, the canoe slows and turns. The person in the back is dragging their paddle, steering the boat off-course and killing the momentum. Why, friend, why?

The concept of Castaways (ABC, Tuesdays at 10 p.m.) is loaded with potential: It begins with 12 people, dropped off on several small islands but with no idea where the others are and with no idea when they’ll be picked up.

It has the isolation and open-ended feeling of History’s Alone with the society-building possibilities of Survivor, which Survivor itself has abandoned, so it’s exciting to see that here.

The catch is that they don’t have to find each other; there are no rules, no game, no challenges, no prize. They’re just there to survive and see if they can thrive, or if they’ll tap out before the unknown time limit expires and they’re picked up.

Each person is facing obstacles, and those are shared through flashbacks. These intercut moments from their lives often work well, especially when it’s just a quick flashback that connects visually or thematically to something happening on the island. Those moments are sometimes poignant and emotional, and occasionally just trigger an eye roll.

The cinematography is splendid, as is the presence of a non-competition show on broadcast TV, even one that’s drawing familiar elements from cable shows. (Showrunner Grant Kahler has been an executive producer on Alone.)

Yet the first hour, which airs after Bachelor in Paradise, drags and is surprisingly melancholy. The moments of excitement tend to be followed by moments of despair, or existential angst, or sell-doubt, or other cheerful things.

Life isn’t always cheerful, of course, and thoughtful, quiet, reflective shows such as Discovery’s The Last Alaskans can be captivating. Alas, while that series emphasizes hope and connection, this show has more despair and isolation.

That will probably shift over the course of the season, but the first episode—the only one ABC made available to critics—doesn’t exactly end on Let’s watch more! note.

There is the question of if and how they’ll find each other, but then what? Bickering and conflict? Or group therapy to solve all their problems before the boat arrives? 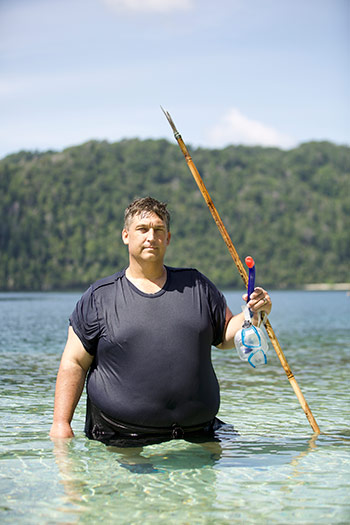 Castaways has bit too much of CBS’ Hunted, in that concealing any actual rules or conceits from the audience is far more frustrating than useful. The producers have clearly stocked each location with shelters, or the beginnings of shelters, and a random assortment of supplies, which is fine and also obvious.

They’ve also asked the cast to pack bags, and then scattered their bags around so that they’d each find someone else’s bag. The contents are more story than survival: journals with stories about themselves, bags and bags of food for the man struggling with his weight.

Are those placed randomly, or are the producers attempting to create connection between specific cast members? And why did they do such a bad job of packing?

In its attempts to make the show have emotional heft, it becomes far too cute.

Sometimes, as the castaways narrate (Are these words they wrote in their journals? Things they said organically? Things that were written for them?), part of what they’re saying appears on screen, in a handwriting-style typeface.

What’s scrawled across the frame tends to be the schmaltziest, the most cliche things: “I always had big dreams, even when I was a little kid.”

The picture is beautiful—the series was filmed in Indonesia, in the western part of West Papau, based on locations mentioned in the credits (Raja Ampat Dive Lodge, Papau Paradise, Swiss Bel Hotel Sorong)—and takes care not to show any part of the production.

But it’s a little absurd to watch a man struggling to swim across the ocean and say, in an interview recorded later, that he was thinking, “someone help me, someone save me—and there’s no one there.”

Meanwhile, a drone is filming from above while a camera operator is in the water next to him, and maybe there’s even a camera on a boat. Sometimes they’re at a distance and sometimes just a couple feet away.

It might be scary, but he’s not as alone and in as much trouble as the show wants to insist that he is.

But what Castaways has done by that point is turn that person into a character worth caring about, and by the end of the episode, only a few of the 12 cast members have been given attention, so there’s more to come.

I’m in for learning about their struggles in life and on these islands, and discovering how one can inform the other. I just wish this boat would move a little faster and stop dragging its heavy hand in the water.