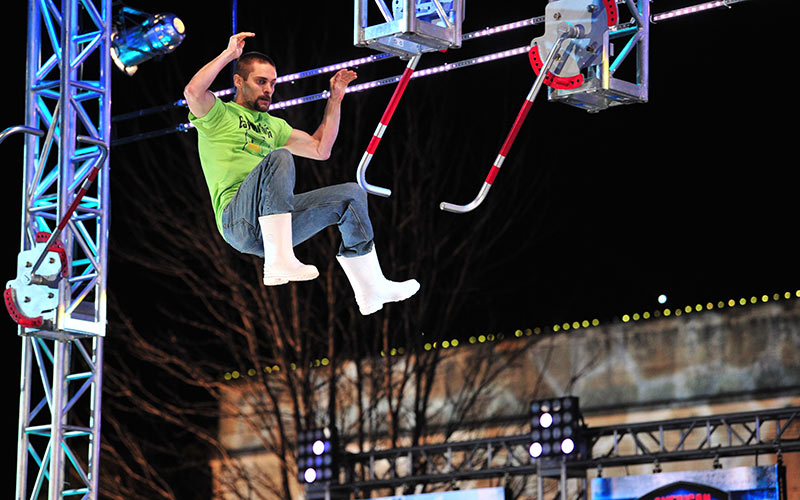 American Ninja Warrior competitors are basically allowed to wear whatever they want, from costumes to footwear.

There are no guidelines or restrictions on their clothing, an NBC spokesperson told me.

There’s one exception: gloves are not allowed. Many of the obstacles require the contestants to hold on to things, from metal bars to tiny ledges, using their fingers and upper body strength alone, and presumably gloves would make that a little easier or give contestants anadvantage.

Amusingly, GQ once reported on this rule by pointing out that it exists while another rule does not:

“You can’t wear gloves out there, but you can take all the steroids and growth hormone you want. Although, as host Matt Iseman told me, ‘I don’t think any of our competitors could actually afford it.’ You can apply for the show and run the course without any fear of being drug tested.”

But the lack of other clothing restrictions have been demonstrated by some previous contestants, who have shown up wearing crazy costumes and footwear.

Chris Cambre, who refers to himself as “The Bayou Ninja,” since he’s from New Orleans—appeared this season wearing white rubber boots.

Those have good traction on wet surfaces, though he told the Daily Advertiser that the boots make him slower on the course, and can slip off easily, so he wears thick socks and jeans, which he stuffed into the boots.

What happened with Russell Hantz on Survivor Australia?

I was hoping you could mention Russell Hantz was competing in the latest season of Australian Survivor and was the second person voted out—and the first from his tribe. It was very satisfying. —Peter

Russell was voted out of Australian Survivor: Champions vs. Contenders with an immunity idol in his pocket.

Have a reality TV question for me? Send it in and I’ll do my best to answer.