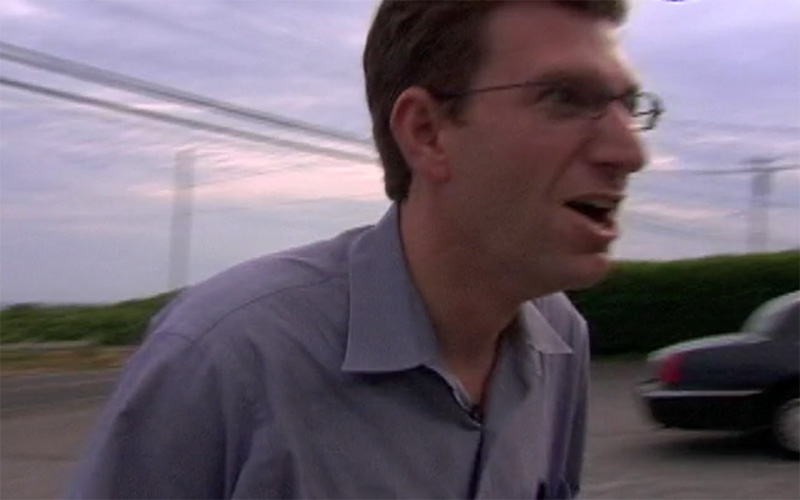 In my favorite hour—episode three—one reporter goes from covering a murder to a Harry Potter release party, while a gossip columnist’s assistant struggles with the pointlessness of attending celebrity events and navigates the world of publicists, including one who’d previously driven her SUV into a crowd of people.

But my favorite scene in that episode involves a reporter, Adam Lisberg, who’s sent on a rather boring task: driving around Long Island, going to locations where a high-ranking Catholic priest may have gone to have an affair with his secretary.

Having found nothing, Lisberg heads to his next location, but as he sees a car pass him, he thinks it might be familiar, one that he saw previously. Talking to the camera, he’s uncertain and constantly second-guessing himself.

Still doubting his own instincts, he makes a U-turn and goes back. Lisberg pulls in to the parking lot of the Surfside Inn, where a beleaguered car service driver approaches him for help, trying to figure out where he is (this is pre-Google Maps).

That’s when the driver says that he been driving “some monsignor” around.

Yes, for some inexplicable reason, the priest is back at the very same location where he’s been accused of having an affair with a married woman—and now, a reporter is there, too. Lisberg grabs his camera, and asks the priest questions as he leaves the Inn.

It’s an extraordinary moment of journalism—but even better television. Seeing the photo Lisberg takes in the paper is far less dramatic than the moment where he asks the Monsignor questions while taking photos.

What’s incredible about that moment, besides the confrontation, is that we see journalism being practiced. The false leads, the legwork that leads nowhere, the questions and curiosity that eventually lead somewhere.

We also see editors who don’t just publish details from a videotape of the priest and his secretary at a hotel, but instead work to verify its contents. They argue over whether or not they have enough for a story.

I highly recommend the show for all these reasons. And I share this now because, last week, half of the journalists who worked at the paper—including some featured in the series—were fired.

‘I traded anonymity for legitimacy’

Kerry Burke, who was one of the show’s central characters, explained why agreed to be featured on the show in a 2006 interview with The Bowdoin Orient. “I traded anonymity for legitimacy. I go to people on the worst day of their lives and say, ‘Tell me everything.’ It would be hypocritical to not do it when people asked me to tell my story,” he said.

Burke was one of the 40 people fired last week.

Last week, Tronc, the corporate monster with the comic name, fired half of its journalists. In a statement, Tronc cited “significant financial challenges” for “reducing today the size of the editorial team by approximately 50 percent and refocusing much of our talent on breaking news.”

But they fired many journalists who broke news, like Burke, who worked for the paper for 16 years.

Oh, and Tronc’s chair, Michael Ferro, resigned this spring and received $15 million, right before two women said he sexually harassed them, which prompted this analysis from Deadspin: “The journalists who lost their livelihoods today in effect had their salaries and benefits re-routed to Michael Ferro’s bank accounts. Against their wills, they were made to pay him for being a fucking pig.”

Those people’s work was on display every day in the newspaper.

And it was made accessible to the world on Bravo 12 years ago, and is still viewable today, on Amazon.

I wish Bravo would air Tabloid Wars again, perhaps a few marathons, assuming they still have the rights to do so. It illustrated how the “media” is just people doing the best they can. And even better, it was just wildly entertaining reality television.