Skip to Content
Are You The One season 5's cast. The show is now casting for AYTO season 8. (Photo by MTV)

MTV’s Are You the One season 8 has been casting this summer, looking for the “usual hot singles” but also for “sexually fluid individuals,” according to casting web sites. Gender non-binary individuals can apply.

That’s a first for the MTV reality competition, which has so far featured a cast of straight men and women trying to figure out who their opposite-sex match is. The show is also currently casting sets of twins.

AYTO season eight will film in January 2019, according to one casting notice.

The production company, Lighthearted Entertainment, has a separate form for sexually fluid individuals to use when applying. It says:

“This season, in addition to our usual hot singles, we are particularly interested in casting SEXUALLY FLUID INDIVIDUALS. If you are over the age of 21 and open to dating all genders, please apply now!”

There’s also a separate form for twins to use. The twins form only gives the option of male or female, while the application for sexually fluid individuals allows applicants to choose non-binary.

Presumably, the search for contestants who aren’t straight means people of the same sex could match and/or hook up with each other—opening up more possibilities for matches, sexual tension, and drama. 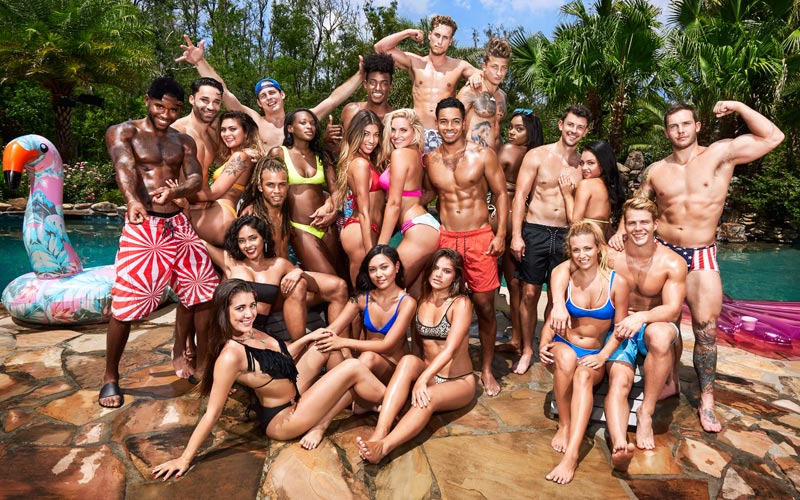 The Are You The One season six cast demonstrating what matters most to MTV: ripped, flawless bodies. (Photo by MTV)

It appears as though the season will follow the usual format—or at least, the production company’s language about the show has remained the same even as they’re searching for people who’d wouldn’t fit into this strict binary:

“If your perfect match was standing right in front of you, would you even know it? In the most ambitious dating experiment ever attempted, MTV will select 11 gorgeous single women and 11 hot single guys and put them through an extensive matchmaking process to find their perfect match. If they succeed, they’ll split the largest cash prize in MTV history – ONE MILLION DOLLARS.”

During season three, AYTO’s original host Ryan Devlin said in an interview that the show starts with “a massive pool” of possible contestants in order to find matches.

And asked about the possibility of doing a season with gay or bisexual cast members, he said:

“I’d watch it and certainly host it. There’s so many people out there looking for love. And there’s casting challenges with anything, but I think it’d be fantastic. So yes, season four or a spin-off even—I would love to see it. I know there’s been discussion about this and I don’t know where they’re at, but I’ll be sitting down with producers soon about season four and I’ll bring it up again.”

Of course, he most likely will not host it, since he was replaced as host by Terrence J in season six.

Being so transparent in a search for models may seem odd, but clearly, physical appearance is what matters most for Are You The One, after all, so that viewers can appreciate, ogle, and/or hold up the cast’s bodies as impossible standards for themselves.

At least now, there will be more diversity in who those beautiful people are attracted to.