Skip to Content
America's Got Talent's season 13 judges—Howie Mandel, Mel B, Heidi Klum, and Simon Cowell—in front of the live audience, which is usually very, very loud, at least on TV. (Photo by Trae Patton/NBC)

All the reality shows have such annoying loud background music, it’s hard to hear what people are saying. And there is nothing wrong with my hearing yet. Can’t the producers just make it less loud, and more soothing? It drives me nuts. Sometimes I just switch it off. Am I the only one to be bothered by this? I wish we could find a solution to this. My friends all feel the same. Thanks for an answer, and best regards. —Hella

You’re not the only one, Hella!

It’s summer, and that means it’s time for me to be both annoyed and amused by the insanely loud music and crowd noises on America’s Got Talent, a show I rather enjoy except for its volume.

I find it annoying because audience noises on reality TV shows are often sweetened sounds—they’ve been added in post-production, kind of like a laugh track, and feel unnecessarily, obnoxiously loud.

Still, it can be funny when the editing includes insane crowd screaming and cheering, and then the camera pans across people who aren’t even clapping, and definitely aren’t cheering and whooping.

Gordon Ramsay’s terrible but popular 24 Hours to Hell and Back had a brilliant example of this in its first episode, as a handful of people stood around silently as shocked gasping noises filled the soundtrack. Perhaps it was a crowd of ventriloquists?

But even if a show isn’t faking sounds, it can be too loud. So what’s happening?

First, your home entertainment setup may actually be contributing to the problem. Fox Sports offers a technical explanation what goes wrong when there’s a mismatch between the input and output. Your system could basically be prioritizing the wrong channels of audio. So if you have a surround sound system, it might be worth playing with its audio settings.

While we’re adjusting home entertainment systems, here is a public service announcement: turn off your TV’s motion smoothing! It’s ruining television and movies and you might not even notice.

So Google your TV brand or model, and something like “turn off motion smoothing,” and you’ll instantly improve your life.

Back to the question. Assuming your TV’s audio is fine, some shows just are loud.

Those that are sweetening (adding) crowd noises may be doing so to help compensate for an audience that’s smaller, or not exactly enthused since they’ve been sitting for hours watching people fall in the water.

Also, not all audiences or crowds are covered in microphones that can pick up their sounds.

In addition, many reality shows add music and sound effects—those damn cymbal crashes!—as a creative choice, to try to make what you’re seeing more exciting. It may not be the show’s producers who are doing this, and may come from network requests to increase drama and tension. (Here’s more about that crazy process.)

Whatever the reason, the effect is often annoying. And it’s unnecessary.

Look at a show like The Great British Baking Show, my go-to as an example of reality TV that can be entertaining and also not annoying. There’s music, and it’s sometimes even dramatic, but it never stomps all over the people we’ve tuned in to watch. You can hear Mel and Sue’s corny jokes clearly, and it never feels aggressive.

So I’ll add my voice to Hella’s: Dear networks and producers and whoever else has a role here, could you please stop this loud madness? Or at least just lower the volume a tiny bit? Thanks.

Why didn’t you cover Catching Kelce? 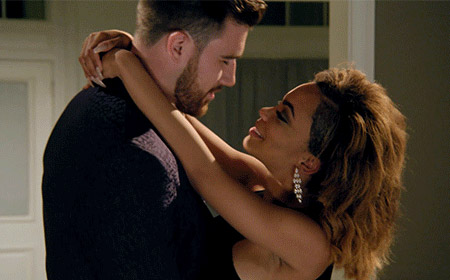 Travis Kelce and Maya Benberry on the finale of Catching Kelce (Photo by E!)

Just wondering why you haven’t written a piece on Catching Kelce? You have been critical of diversity on the bachelor, yet you didn’t give any coverage to a black “winner” of a dating show. —Drew

First, my apologies for taking a few years to answer this question. My intention was to check in with the show, but I never did.

That’s a significant part of my answer to your question: There’s too much TV now to watch everything, and a Bachelor knock-off on E! wasn’t something I prioritized.

A quick recap, though: Catching Kelce starred Kansas City Chiefs football player Travis Kelce, who was looking for a partner among 50 women, one from each state.

Travis eventually chose Maya Benberry, who was 24 and described as “an elementary education graduate.” Travis is white, and she is black, making them one of the few interracial couples to be formed on a dating show.

That’s notable, though my criticism of The Bachelor franchise’s diversity is not about who the star chooses. Instead, it’s about who the producers cast as its leads (nearly all white people) and suitors (also usually white people, and when people of color are cast, they tend to exit early).

Catching Kelce concluded in late 2016, and by January 2017, Maya confirmed she and Travis had broken up. She did so in a video, talking also about how she’d been subjected to a barrage of racist comments from viewers, which came in part from the show’s editing.

“They wanted me to be the villain, and that’s fine,” Maya says. “I do kind of hate the fact that they only showed that negative side, and didn’t get to show me and Travis’ true connection, the friendships I had with the girls in the house.”

She also said, “It sucks that I didn’t really get to enjoy my relationship because of so much hate and backlash.”

That does suck, so I do wish I’d given more attention to the show, especially to understand how the editing may have contributed to viewers’ grotesque responses.

Have a question about reality TV? Ask me!

the loudness of the reality show is symptomatic of a bigger problem: watching that reality show in the first place. stop wasting your one life watching stupid shows on tv.

And people who seek out articles about reality TV shows and then spend time commenting to tell other people to stop watching reality TV shows: Are they wasting their lives, too?