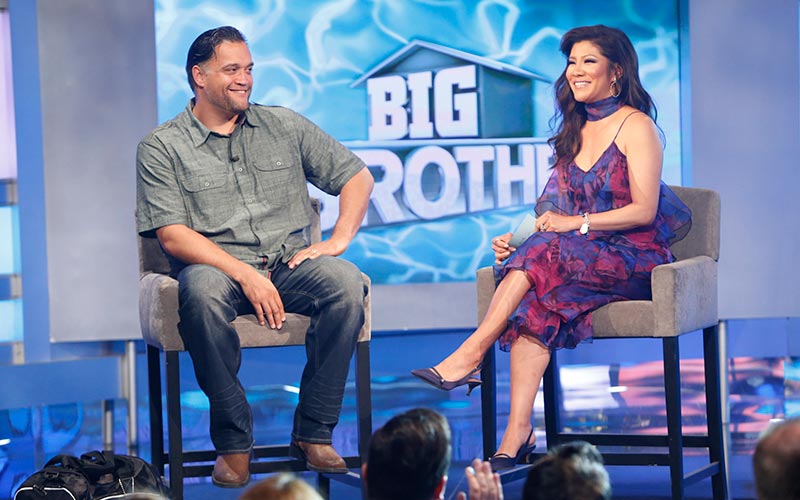 The oldest BB20 houseguests, Steve Arienta, age 40, was the first person voted out. Host Julie Chen explained why the cast is mostly in their 20s. (Photo by Sonja Flemming/CBS)

Why do CBS and Big Brother keep finding a group of younger and younger people to play the game? Host Julie Chen has an answer.

In this weekend’s Parade magazine, as part of an extensive interview, Julie tells Walter Scott:

“You need people that you think are not going to get along. We’ve found that the majority of the group being in their 20s works nicely, especially since it’s summer and everyone’s in bathing suits trying to impress. Also, there’s a level of immaturity in your 20s; you’re still hotheaded and not that wise, so you’re going to act up and be more interesting to watch.”

Okay, let’s recap. Julie says that young people in their 20s are:

That does seem like a fairly accurate description of some previous houseguests, but I don’t think it’s fair to say these attributes are common in younger people.

Perhaps they are common in the young people who apply to a show that with a history of bad behavior, and will edit their outbursts  into sanitized, advertiser-friendly versions of reality?

Robyn Kass had a different answer three years ago

Interestingly, Julie’s answer is very different than the one Big Brother casting director Robyn Kass gave three years ago to a similar question.

After CBS CEO Les Moonves—Julie Chen’s husband—criticized the cast, Kass was asked about the age of the cast, and she insisted the network didn’t want to cast only young people, and suggested that they were simply casting the best characters available.

Ultimately, though, they had fewer older applicants and that’s why they weren’t being cast. She said:

“And if you consider only 1 out of 100 people move forward, the question is: do we put someone older in just because they’re mature — or do you put someone in that is younger because they’re a better character? It’s a back-and-forth discussion. And some older people don’t apply because they think we won’t cast them. That’s the problem. It’s a supply-and-demand issue — and it happens all over reality TV.”

“Next season, if we have amazing people in their 50s or 60s apply, bring it.”

It makes sense that, for various reasons, people who are older and who may have families or established jobs might not be able to take three months off of work to go into a house where everything they say all day will be broadcast on the Internet and they’ll get fired from those jobs when they inevitably say racist things.

Also, people tend apply to shows where they see people who are similar to themselves. So the more they cast young people, the fewer older applicants they’re going to get.

Diverse casts make for better reality TV, and that includes