Happy Monday morning! This week on reality TV took a summer vacation, but it’s back now with details about what’s debuting on your TV screens and/or streaming things this week.

Of course, you can see what’s debuting in the days and weeks (even months!) ahead by clicking the reality TV schedule link on the top of every reality blurred page.

First, Fear Factor returned Friday with its celebrity edition (MTV, Tuesdays at 10), which will feature these Big Brother houseguests against these Survivor players on its July 31 episode. 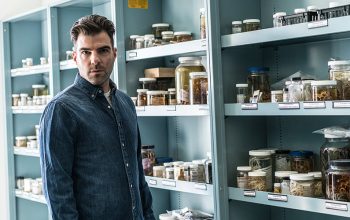 Zachary Quinto, host of History’s reboot of the 1970s/1980s series In Search Of. (Photo by A+E Networks)

Also Friday, Zachary Quinto and History brought back the 1970s series In Search Of (History, Fridays at 10), on which Quinto explores mysterious-ish phenomenon.

For a more grounded look at the word, try The Art Show, which debuts this week (Ovation, Wednesdays at 10) and has a simple mission: it “travels the globe to bring fascinating stories about art.”

CBS tries true crime again with Pink Collar Crimes (CBS, Saturdays at 8), which tells the stories of women who committed crimes, and has Marcia Clark as an expert.

Back this week for a new seasons is Love & Hip Hop: Hollywood (VH1, Mondays at 8), which was bringing back Kimberly Pate, aka K. Michelle, but she says she quit the show.

Desert Flippers (HGTV, Tuesdays at 9) follows house flippers in Palm Springs, not people who flip cupcakes, which was my initial misreading of the title.

Ballet, baseball, and playing sports under the threat of death

A few new documentaries are on TV this week: