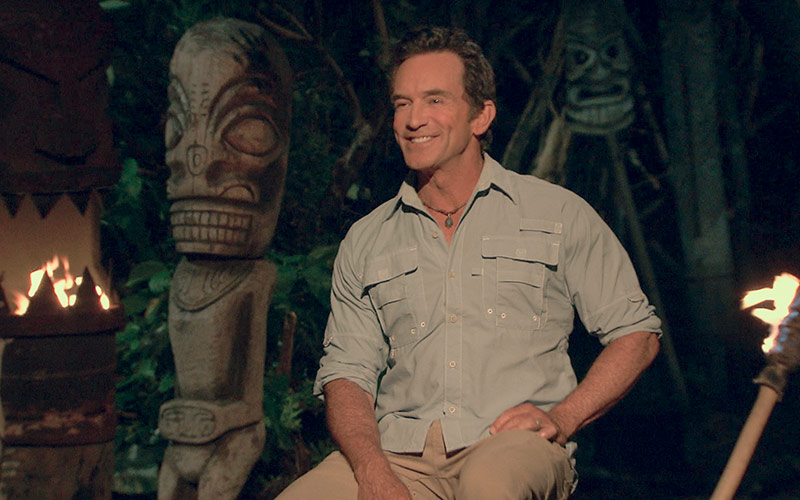 Survivor host and showrunner Jeff Probst during Survivor Ghost Island episode 14. On Survivor Island of Extinction, all of the cast could still be on the show during its final episode. (Screen shot by CBS)

Survivor: Edge of Extinction concluded filming earlier this week, and more information is leaking out, including that the season’s big twist could mean that every single player is still eligible to win the show on day 36, during the last episode.

Yes, the entire Survivor 38 cast might still be on the show during episode 14.

Island of Extinction will essentially function as a version of Redemption Island, where eliminated Survivor 38 players go to try to earn a spot back in the game.

However, instead of weekly duels to see who gets to stay, there will be two opportunities for its players to all battle each other to return to the game.

Inside Survivor’s Martin Holmes has updated his report about season 38, adding that there will be 18 players, and elaborating on the twist with this detail:

“When a player is eliminated they can choose to quit or go to the Island of Extinction (IOE). Players can leave at any time. There will be two chances for a player to win their way back into the game – at the merge and then around Day 35/36. The IOE does not reset at the merge; the extinct castaways who don’t win their way back into the game can continue to live on the IOE until Day 35/36 when the second opportunity to reenter arises. Yes, that means pre-merge boots could be living alongside post-merge boots. And yes, that theoretically means the entire cast could still be alive in the game come Day 35/36. It could also mean a player eliminated on Day 3 still has a chance to reenter and win the season.”

Players will apparently choose whether or not to go to the Island of Extinction, so perhaps no one will be there at the end, so it’s possible this could be a bust.

Or this twist could undermine the central premise of the show even more than the outcast twist and Redemption Island did, and further erode what’s left of original Survivor.

Imagine, for example, if the first person voted out came back into the game on day 36—having participated in no challenges, no strategizing, and no votes beyond that first episode—and then won the jury’s votes because the jury was bitter about their other options.

That’s a worst-case scenario. I can imagine several of those with this twist.

Having an Island of Extinction gaggle that’s larger than the post-merge tribe could pull attention away from the players’ game.

But it also could be an opportunity for the show to revisit its early focus on social bonds and survival, since those on the island won’t have anything to do except wait. Of course, there’s considerable irony involved in reclaiming some of what once made Survivor so great via a tribe of people who’ve already been voted out.

Whether or not the eliminated contestants actually stick around for the entire television season depends upon when the production decides to deploy the second opportunity to re-enter the game. Will it be on the penultimate episode, or part of the finale? Inside Survivor suggests “around” day 35 or 36, and day 36 typically lands—though not always—at the start of the final episode.

Considering this season is also bringing back four players, this could give Survivor 38 an opportunity to keep them on screen for 100 percent of the season.

Survivor started with the premise that it was a show about surviving a social game. If a tribe voted a person out, their torch was snuffed and the person’s game ended.

Fire represents life, and when the fire is gone, so is the chance to win $1 million—but the producers and network really seem to like those crazy birthday torches that keep relighting themselves, so we’re in for another season of eliminations meaning less than they usually do.

Update, July 28, 2018: The title and first paragraph of this story were updated to reflect the correct name of the season—Survivor Edge of Extinction, not Island of Extinction—after the source cited here, Martin Holmes, corrected his original report.