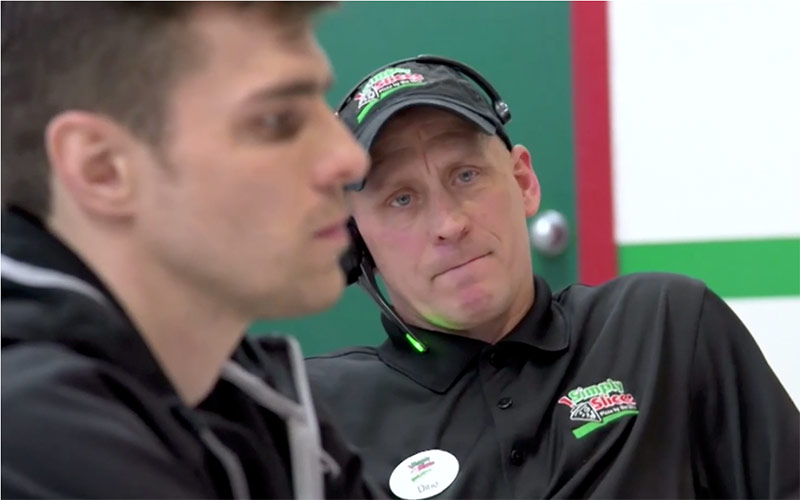 Dino Pavoni (right) with his son Doug (foreground) in a screenshot from The Profit's episode about their business, Simply Slices.

The Profit season five episode “Simply Slices” may be best described by this not-so-subtle title on a CNBC clip: “a control freak gives Marcus a run for his money.” But it turns out the control freak, who demanded his mic be removed in the final scene, has been on reality TV before.

The episode focused on Dino Pavoni, who started a drive-thru pizza business, Simply Slices, that has a lot of potential as a franchise, and is mostly run by his family. Alas, Dino won’t let anything happen because he’s far too controlling—over the business and his kids, who he home schooled and gave names that start with the letter D.

As the episode progressed, Dino got angrier and more defensive toward Marcus Lemonis and the “process” (i.e. trying to make a television show out of trying to invest in a business), including in the final scene when he demanded a camera operator stop filming him.

As a result, the social media mob is out for Simply Slices; two of its social media accounts, which are linked from the company’s web site, are no longer visible. The store hasn’t been active on Twitter, but people are still tweeting their displeasure at its account.

The episode was painful to watch, especially in that final scene, when Marcus returned to hear ideas for the new franchise, and instead found that Dino and his wife Debbie had pushed their son Doug and his wife out of their location, claiming it was a mutual decision, even though it was not.

As frustrating as his behavior was, I genuinely felt bad for him—and even more so for his family—because it seemed like his behavior was born from a desire to protect his kids, even though putting a butterfly in an airtight jar isn’t the best way to let it thrive.

Then I learned that being a controlling monster is a reputation he and his wife Debbie relish enough to have participated in the second season of a CMT reality series called World’s Strictest Parents.

The series was a BBC format that came to the US, but only aired two seasons between 2009 and 2010.

“Each one-hour episode documents the journey of two unruly teens from different families as they are forced to adapt to the rules and regulations of very strict host parents. Living under different standards from their families back home, the misbehaving teens are subject to consequences for breaking rules and skipping chores while the strict parents attempt to mend their ways.”

Dino and Debbie Pavoni were the “very strict host parents” who appeared on episode 204, titled “The Pavoni Family,” which was filmed eight years after their son Dominic died of a cocaine overdose.

Marcus Lemonis said that he didn’t know until after production, though it sounds like the producers did know. “I leaned after that the family participated in a show called worlds strictest parents,” he tweeted.

The 2010 episode of the CMT series included footage filmed at Simply Slices, which looks the same in 2010 as it does in now. (The Profit’s episode was filmed in March 2018.)

“Routine and structure are integral parts of raising a family,” Dino says, while we see footage of him forcing his 16-year-old son, Derrick, to hold weights with his arms extended.

Important tangent: Derrick says what he did wrong in such a stilted and awkward way that I wonder how staged the scene was, and if so, how that experience affected Dino’s perception of The Profit’s production.

Another tangent: While Simply Slices did seem like a good business, I wonder if the family was cast for The Profit because they were good TV, rather than a potentially good fit.

Back to World’s Strictest Parents and Dino’s teenager holding weights up as punishment. “Get out of bed quickly and efficiently,” Dino says. Later he tells the camera, “Keepin’ ’em busy is keepin’ ’em away from idle time; idle time just gets us in trouble.”

But he also suggests that this version of his parenting is less strict than it was before: “When Dominic died, I became a more patient parent, because I realized how important and valuable every minute with them was.”

Hopefully, that’s a lesson he keeps learning, for his business and his family’s sake.

As Marcus Lemonis told CNBC, “If he doesn’t learn to trust other people, particularly his family, his business will be the same forever.”