How The Incredible Dr. Pol is filmed: an interview with Dr. Pol

A 76-year-old Michigan veterinarian, who immigrated from the Netherlands in the early 1970s, is now the biggest star on one cable television network.

Dr. Jan Pol’s show, The Incredible Dr. Pol, is NatGeo WILD’s top-rated series, and before season 13 even debuts this weekend (NatGeo WILD, Saturdays at 9), it has already been renewed for season 14, which will air in January 2019.

Announcing the renewal earlier this year, NatGeo WILD said that the show “continues to break ratings records for the network” and “ranks in the top three most watched shows on ad-supported cable” among all viewers age 2 and up.

Season 13 will be a larger season than, with 13 episodes instead of the typical 10 episodes. (Older episodes of Dr. Pol are not on Netflix, but seasons 11 and 12 are on NatGeo’s site, and all seasons are on Amazon.)

Watch an exclusive look at a season 13 scene, and read on to see what Dr. Pol thinks about the show’s success, when he won’t let cameras film, why no-kill shelters can be problematic, and more.

When I interviewed him earlier this year, Dr. Pol told me that The Incredible Dr. Pol’s success was quite unexpected.

“Heck yes, it surprised me—it surprised everybody! How do you know when you make a hit show?” he said. “This show is watched by everybody—all kinds of life, all ages, big family show, and I think this is what is so fantastic.”

A big part of why it works, he says, came from his son, Charles, who is a producer on the series and initially pitched his dad’s work as a reality TV show.

Dr. Pol said that Charles told him, “Dad, do your work. That is interesting enough. Don’t look at the camera, don’t do anything for the camera.”

“That format has stayed,” Dr. Pol told me. “Nothing is done specifically to make a show”; “it’s not scripted; it is real,” he said.

It’s just his usual veterinary practice, which is filmed for about 100 hours a week for eight months every year.

How The Incredible Dr. Pol is filmed

Only about 10 percent of the animals who come into the clinic are actually filmed for The Incredible Dr. Pol.

“Probably one in 10 at the most,” he said, and that’s because “a lot of it is routine.” A producer, “Justin, is sitting their playing with Tater, the three-legged cat, and he’s watching what comes in. And he says, Hey, this is interesting, so let’s see if they want to be filmed.”

Producers will approach pet owners, but there is no pressure. “People can say yes or no—if it’s no, fine!” Dr. Pol told me.

There is also no compensation, nor do pet owners receive their veterinary services for free.

“Sorry about that, no!” Dr. Pol said. “NatGeo WILD can have a lot of money, but they don’t pay for the cases. [Clients] pay for it themselves.”


Producers have started, in recent seasons, to follow-up with clients. “Now, what I like very much, is that they sometimes come back, a couple months later, and visit the owner and show how it is,” he said.

If someone agrees to have their vet visit filmed, their file is tagged so that he knows “the film crew is going to be there. Then they put the extra lights on in the exam room, and we just walk in and do our work,” he said. “The camera’s always in the way because the rooms are not that big.”

Even if a pet owner is willing to be filmed, Dr. Pol himself will sometimes keep cameras away.

When does that happen? When “people are not taking care of the animal, and we see that way too much,” he said. “We don’t want to say, Okay, look at this. We don’t want anybody to look bad, to be honest with you. And sometimes, yes, you see it a little bit. But we don’t dwell on it; we don’t make it so obvious that it makes the owner feel bad or anything.”

Why not? “Many people have no idea that their pet got sick. And this is what we see now with cancer, especially,” he said, “because it happens so gradually, they have no idea. And then they come to the clinic, and that’s it.”

That has nothing to do with the show, Dr. Pol said, but is just part of his practice. “You don’t do that, even when they are not filming. The animal comes in, and you have to say, I should have seen this one last week—no.”

Dr. Pol said his best opportunity to affect what ends up on television comes before cameras even start rolling.

“They only way I can control what comes on this show is there,” he said. Footage that is processed “into the computer, sent to Washington, D.C., I have to fight hard—jump up and down, scream, in order to not have it in the show.”

Although post-production takes place on the east coast, there’s a considerable presence on his property in Michigan.

“I built a four-car garage, insulated, heated, so none of the medicines will freeze. And they have taken that over,” Dr. Pol told me, referring to the producers.

Two cars still fit in the garage, but the rest of the space is filled with a backdrop for interviews and other equipment, and is also where the crew eats catered meals and has craft service. “Lots of snacks!” Dr. Pol laughed. 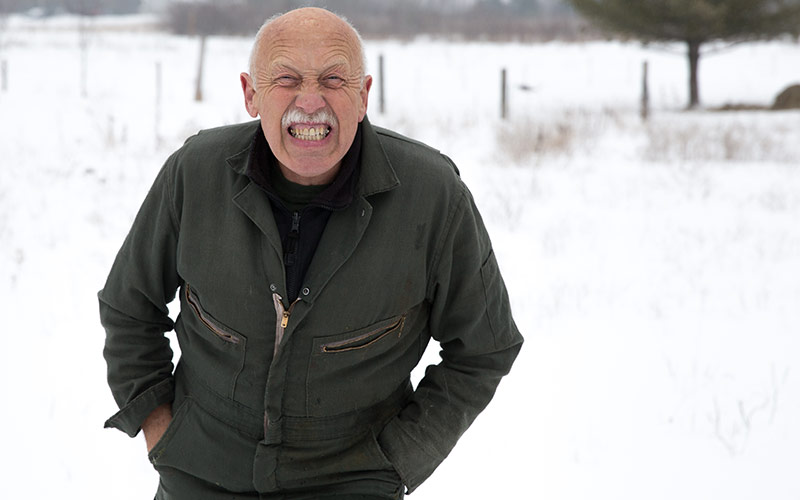 Dr. Pol in central Michigan, where he lives and cares for animals even when it’s freezing outside. (Photo by Michael Stankevich/ National Geographic Channels)

Dr. Pol on his critics, and on pet care

A television program about animals that is transparent about how they’re being treated receives some criticism, as do the pet’s owners.

But Dr. Pol said, “Let them judge it—I don’t read Facebook. I care about my animals; I do the best I can.”

Several years ago, one critic—a fellow veterinarian—filed a complaint in Michigan after watching Dr. Pol perform surgery on an injured dog. The Michigan Licensing and Regulatory Association first ruled against him, but an appeals court overturned that, saying the state’s decision was not “supported by competent, material and substantial evidence.” That decision was hailed by a different vet, who wrote, in part, that “The real value of the Pol decision is to illustrate that the standard of justice with veterinary boards can be particularly poor.”

Dr. Pol told me that his number-one concern and desire is for pet owners to get “regular checkups and have [their pets] neutered.”

Why don’t they do that, even after years of Bob Barker and Drew Carey encouraging people to have their pets spayed and neutered?

Dr. Pol responded with empathy, quickly pointing out that many people just “can’t afford it. Everybody wants a pet—I have kids, I want a pet. … Before they know it, she’s pregnant. That’s why the shelters are full.”

“I am so much in favor of affordable pet care, and basically that’s going out the window right now,” he said.

Dr. Pol said that there’s also a cycle of pets going into shelters and then returning.

“To be honest, the no-kill shelters are very commendable. I love it. And not that animals should die, but for animals to sit in cages in months, maybe years, before they’re adopted? No. That’s a prison, solitary confinement. That’s not fair on the animal either,” he said.

He added that being in a shelter can make a pet un-adoptable.

“Many times you see [that], especially with cats that have been in the cage for that long,” Dr. Pol said. “Many times, they are adopted, and they are not housebroken any more because they have been so long in this cage where they poop and they eat in the same spot, and they don’t want that. You cannot put the food by the litter box of the cat; they won’t eat. So they go in the house, and say, Hey, this is a big place! If I go in that corner, I’ll never smell it.”

And that leads to people returning their pets to the shelters. “These animals that are adopted come back, because oh my gosh, he poops all over the place,” he said.

“Don’t fill up the shelters,” Dr. Pol continued. “What I’ve said many times, the way they’re doing it is they’re trying to catch all of the water out of the house in all of these buckets, instead of turning the water off. Spay and neuter!”

Dr. Pol’s adopted, neutered cat, Tater, has become quite popular—in the clinic, and even on social media.

“I castrated him, I took the leg off on Tuesday, on Wednesday we just opened the cage door, he jumped out, and he has owned the clinic ever since,” Dr. Pol told me. “That cat is so fantastic for dogs, cats—he’s not afraid of anything or anybody.”

Tater is now on Instagram @Tater_Pol, and Dr. Pol said that kids visit Dr. Pol’s office want to see Tater, or come into the clinic just to see the cat.

“He is unbelievable,” Dr. Pol said. So are the show’s fans.

“We meet the nicest people. The show is about animals, care for animals. Animal lovers are good people, and that’s the ones we meet.”