If you have not yet settled in to the rejuvenating hot springs of the NBC television program The Good Place, you should do so immediately.

You don’t need to read anything about it, just know that it’s an exceptional comedy with a brilliant ensemble and sharp writing and storytelling, and comes from the co-creator of Parks and Recreation. Season one is on Netflix; here is a link. Why are you not watching it right now?

Okay, so once you’ve already watched season one—or if, like me, you are eagerly anticipating season three—you may read on. Or, actually, listen. That’s because I’m recommending something to listen to, not watch.

The show has given us a delightful gift this summer: a behind-the-scenes podcast about season one.

The Good Place: The Podcast is a riveting nonfiction look at one of the best fictional pieces of popular culture from the past few years. 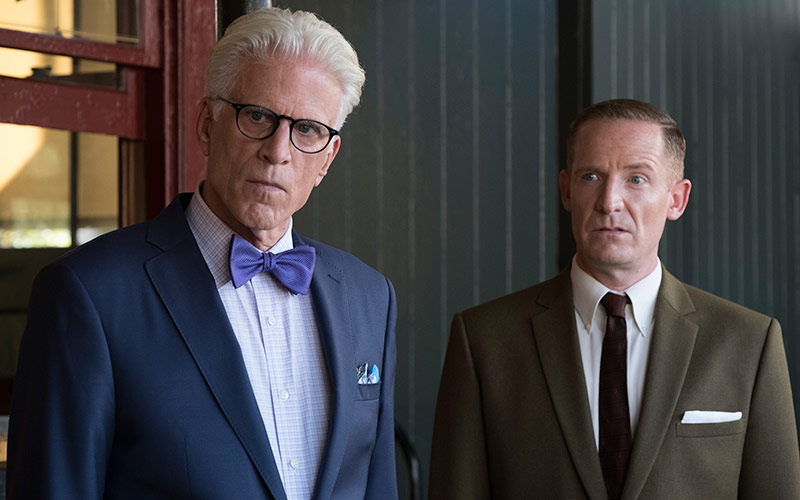 Hosted by Marc Evan Jackson, who plays Shawn on The Good Place, the podcast’s episodes typically include both an actor and someone who works on the show behind the scenes.

The list of behind-the-scenes guests has included writers Josh Siegal and Dylan Morgan, Megan Amram, and Alan Yang; executive producers Morgan Sackett and Joe Mande; set designer Camille Bratowski; and casting director Allison Jones, who is brilliant at assembling ensembles like this one.

The actors who’ve been on, as of this writing, are Jameela Jamil, Manny Jacinto, D’Arcy Carden, Kristen Bell, and Ted Danson.

Each podcast episode is focused on a particular season one episode, though the conversation still darts around the entire first season, so it’s critical to have watched it in its entirety first.

The result is a forking awesome collection of anecdotes and insight into how this televised bundle of puppies and kittens gets made.

For example, writer Megan Amram—who once tweeted a massive list of restaurant puns she wrote for an episode—revealed that the show’s writers hosed Deadline.com when D’Arcy Carden was cast as Janet. They told Deadline, as the story still says, that “Carden will play Janet Della-Denunzio, a violin salesperson with a checkered past.”

Marc Evan Jackson, whose voice is a crisp breeze skimming across a lake, is the perfect master of ceremonies for this conversation.

He’s both participant in the conversation and interviewer, asking questions and making witty comments without stomping on his guests, as other podcast interviewers sometimes do. He also contributes to the insight about how The Good Place has come together, since he is a cast member, too.

Here’s the first episode, which has just creator Mike Schur as its guest, and that alone is a feast for Good Place fans. But all the episodes left me with even more of an appreciation for the talent and intelligence that fuels the series.

The Good Place podcast is the perfect companion to a perfect show.