First up are CBS reality show cast members, followed by people who’ve appeared on ABC’s Bachelor franchise, including The Bachelorette and Bachelor in Paradise.

The first episode, airing at 10 p.m. ET, is the “Reality TV Royal Rumble,” Fear Factor’s episode 915, which has players from Survivor and Big Brother (and The Amazing Race, since Rachel and Brendon went on that, too).

In one challenge, they’ll be lying in separate glass boxes with roaches, worms, snakes, and other creatures dropping on them while they’re trying to match puzzle pieces by describing them to each other. 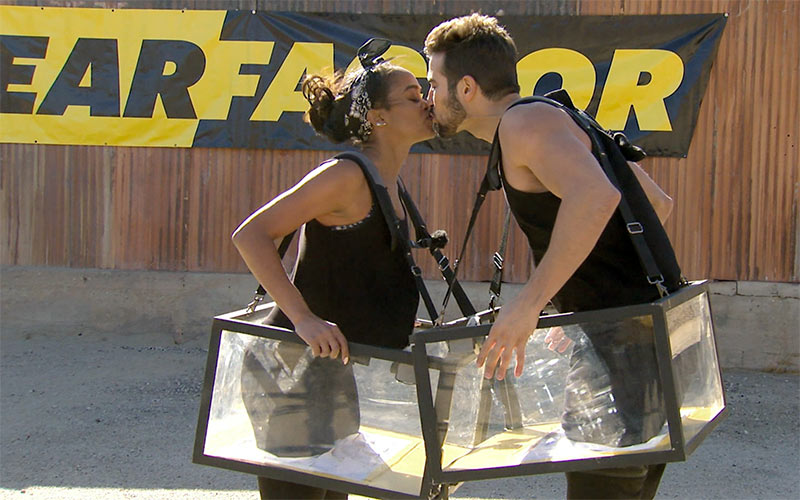 The Bachelorette’s Rachel Lindsay compete during Celebrity Fear Factor’s “For the Love of Fear” episode. (Screen shot by MTV)

After that, at 11 p.m., is episode 916, titled “For the Love of Fear,” which has Bachelor franchise stars and contestants Rachel Lindsay, Bryan Abasolo, Corinne Olympios, Vanessa Grimaldi, Alexis Waters, and Danielle Maltby.

Here’s a preview of that episode, featuring The Bachelor’s Alexis Waters—the aspiring dolphin trainer who showed up dressed like a shark when she first met Nick Viall—and her sister, Nicole.

They’re competing in a challenge that involves hot wax dripping on them while they’re chained down.

Of the 10 Celebrity Fear Factor episodes, a few others also have reality show cast members.

Fear Factor is in its ninth season overall, and its second season on MTV.

The season has been split between “From Hell” episodes that aired in March and April, and this batch of celebrity episodes, which have been doubled-up on Tuesday nights.