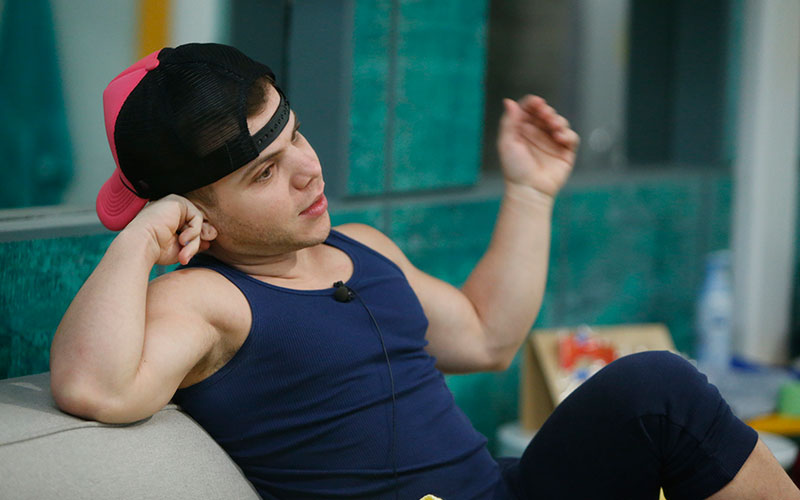 CBS has responded to Big Brother 20 houseguests’ behavior—a conversation with racially charged language and repeated, unwanted physical touching—by releasing a statement that differs from its usual response to these kinds of incidents. The people involved have been “warned” and may receive “future consequences,” the network said.

Rachel: “my stomach is as dark as Bay’s”
Angela: “I know, I’m looking ghetto here with the skin coloration,..”
Rachel: “I will change ethnicities, I mean I already have basically.. two more days in the sun I will — won’t be good”

“Bay” refers to Bayleigh, who is black. Rachel and Angela are white. (Here’s an explanation about why the word “ghetto” “carries a lot of weight,” and a thoughtful piece in which a woman writes about realizing “how racially charged the word ‘ghetto’ was.”)

Earlier, on Friday, JC Mounduix entered the HOH room holding an ice cream scooper. He first goes to the HOH bed and clicks the scooper several times, and the women on the bed scream.

He walks over to Kaycee, lifts up the blanket covering her, and puts the ice cream scooper underneath. “Here, this feels really good,” he says. “Look.”

Kaycee says, “No, don’t put it on my vag.” JC removes it and tries to do the same thing to Tyler (“look!”), but Tyler says no and covers himself. JC then walks back to the HOH bed and, while trying to put the ice cream scooper under the comforter over Kaitlyn, says, “This feels really good. Open up your vagina.” She says, “no.”

Early Saturday morning, when four women were massaging Tyler, JC entered the room and rubbed his hand on Tyler’s crotch.

Tyler reacted immediately, pulling his legs up and covering himself with his hand as Bayleigh said, “Whoa. Whoa.” Tyler, who had his head back and couldn’t see, asked, “What is that?” Bayleigh said, “JC, he’s harmless.”

As Hamsterwatch said in a recap, “It’s only Day 13 and we’ve already got a dumpster fire in the making.”

Late Tuesday, after several news organizations published stories about these incidents, CBS responded with a statement.

That typically wouldn’t be newsworthy, because in the past it’s been an empty gesture—the network has released virtually the same statement multiple times, putting forth the effort to copy and paste but not to change how it produces the series or deals with such behavior.

But this year’s is not just the usual statement copied and pasted.

The first two sentences are nearly identical to what the network always says—it’s basically an idealized description of the show and an attempt to distance itself from the people they cast and are now employing:

“Big Brother is a reality show about watching a group of people who have no privacy 24/7 — and capturing every unfiltered moment and conversation in their lives. At times, the houseguests reveal prejudices and exhibit behavior that we do not condone.”

The only difference from the 2015 statement is that the phrase “exhibit behavior” has replaced “other beliefs.”

But then it gets interesting, because this time, the network says the behavior has actually been addressed:

“The producers have addressed two such incidents that were seen recently on the 24/7 online feed. In both cases, those involved have been warned about their inappropriate behavior and offensive comments, as well as future consequences. These events will not be part of any future Big Brother broadcast on CBS.”

What the consequences will be are not clear,

Of course, they still won’t show it on TV. Why not? In the past, Allison Grodner explained why producers ignore bad behavior on the TV show, and CBS has consistently defended that practice.