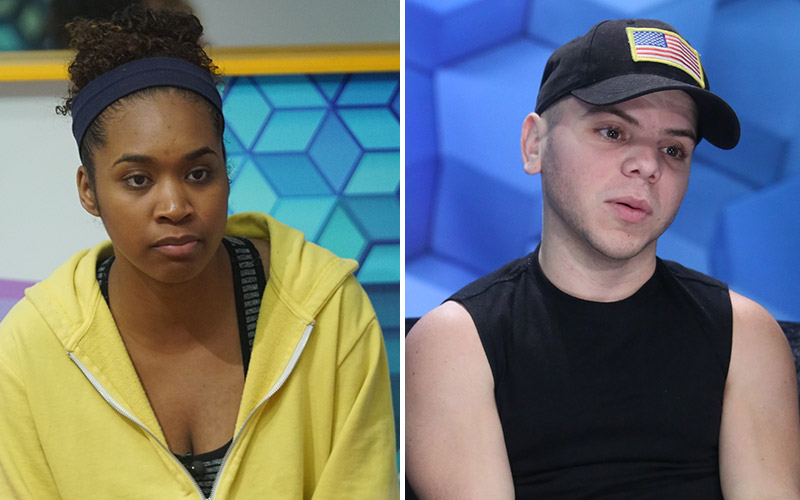 At the end of Thursday’s Big Brother 20 live episode, host Julie Chen read this off the teleprompter:

“And, earlier this week, comments made by JC and Bayleigh sparked an intense conversation in the house about cultural sensitivity. Tune in to Sunday’s episode to see this conversation and what transpired after.”

She was referring to a conversation in which Bayleigh reacted to JC’s use of the n-word, which he used as a comparison to a derogatory word for people of short stature or those with dwarfism.

Little People of America explains why the m-word is offensive, and I’ll refer to that as the m-word, since it considered derogatory, CBS bleeped it, and the entire point of the conversation was how painful it is to repeat these words, even in merely descriptive ways.

“Big Brother is a reality show about watching a group of people who have no privacy 24/7 — and capturing every unfiltered moment and conversation in their lives. At times, the houseguests reveal prejudices and exhibit behavior that we do not condone. Views or opinions expressed by a Houseguest are those of the individuals speaking and do not represent the views or opinions of CBS.

That’s about when the episode failed, because I didn’t see anyone “reveal prejudices” or any need for “viewer discretion.”

Because what ultimately aired—for a single segment in the show—was a conversation between two people who’ve been very hurt and carry a lot of pain from the way people have used words against them, simply because of who they are.

A disclaimer might be have been necessary had the production and network decided to show:

We don’t need a reminder about how much Big Brother has chosen to conceal before, and how many far more terrible things have been said and done inside those walls.

And, unsurprisingly but still incredibly, the episode was full of casual sexism that went unaddressed:

I absolutely do think reality TV should reflect reality, and the editing should be honest about people’s behavior and ideas, though it should do so carefully and deliberately.

I also absolutely do not trust Big Brother, from the network on down, to do that. After all, this is the show that blamed all of season 15’s racism on one person.

One takeaway I have from last night’s episode is that CBS seems comfortable teasing, promoting, and then showing two people of color talking about slurs used against them and their communities. But CBS is not comfortable showing white people using those derogatory terms.

The first two-thirds of the episode were focused on the HOH competition—Sam won, and immediately turned into an autocrat, setting rules and telling people she’d have no conversations with anyone—and the fallout from the vote that sent Winston home and kept Brett.

That fallout included some clever editing, especially when Kaitlyn figured out who’d orchestrated it: “Do you think it was Tyler and JC?” Then she decided, incorrectly, that Sam changed two votes. When she said, “If I’m not right, that’s so embarrassing, but I really honestly think I’m right,” the editors played the same buzzer sound effect they use for wrong answers or failed challenge attempts.

Later, she told Tyler, “or you lied to me and flipped,” and the editors played the correct challenge noise: ding ding!

I mention this editing because the editing is important, and what we saw of JC and Bayleigh’s conversation was likely edited. It wasn’t on the live feeds, because they were cut shortly after JC said the n-word and Bayleigh reacted to it, and stayed off for about 40 minutes. (The segment that aired on TV was not 40 minutes long.)

The conversation started with Bayleigh saying “I don’t know what a ‘dwarf’ even means” and asking, “Is there a difference between a [m-word] and a dwarf?”

JC wasn’t finished, though, as he completed his thought: “…or like [n-word] and black.”

They went back and forth a bit, with JC insisting, “I was just trying to make a point,” and Bayleigh telling him, “That word that you just said—it’s very derogatory.” JC tried to argue “that some words, they can be used depending upon the context.”

There’s a lot to unpack in their conversation.

There was some irony in Bayleigh continually saying derogatory slurs in a conversation about how painful it was that JC used the most derogatory of all slurs. “If something offended you, I would never say it. I would never call you a [f-word for gay people],” she said to JC, while actually using the word.

The n-word clearly has a long, violent history, and it’s casual usage clearly affected Bayleigh. Additionally, she thought JC was objecting to her reaction: “Why was he yelling at me like I shouldn’t be offended?” she asked someone else. JC eventually apologized.

What I learned from watching the conversation was that they both have pain from being the subject of racist, homophobic, and other slurs, and that even casual usage—especially of such a charged, loaded term as the most racist of all slurs—can be incredibly hurtful.

The best way to describe that, and to end this piece, is to just listen, again, to JC and Bayleigh, and what they said to producers and to each other.

In a series of diary room interviews, JC said:

“I just wanted to make her understand like, you know, how offensive that is for me.”

“I happen to be very short, I’m also gay, I’m hispanic. We’re talking about discrimination, I might know one thing or two. Since I was a child, some people can be very, very cruel.

When I would walk into a supermarket, it’s like literally people are staring at me like, they can’t even believe if I’m real or not. Some people would even give me, like, dirty looks. It helps you to be strong in life, but it also traumatizes you.

This is my chance to just to speak up for a community that probably doesn’t even have a big voice.”

Bayleigh said in an interview:

“Growing up for me was very difficult for me, because I was a black girl in an all-white community. It was very apparent for me since the time that I was young that I was different from everyone. And I’ve never really lived a day in my skin without it being pointed out that I’m black, and I will not ever let anyone degrade me or my race in that kind of way.”

“This is derogatory term to every black person, but I have also been discriminated against my whole entire life. I was one of four black people in my whole entire class. There were people spray-painting, Fuck these [n-words], go back to where you came from. Where I’m from, I went to school with all white people, and every single day, it is pointed out that I am black.”