The Amazing Race 32 is now casting, with finals scheduled for the end of this month. The show just concluded filming season 31 on July 3 in Detroit, and will film season 32 in November, a return to its typical production cycle.

The casting has been advertised by the show’s long-time casting director, Lynne Spiegel Spillman, which is notable only because she was recently fired from casting Survivor.

She had cast both CBS competition shows since their first seasons, and appears to be continuing with Amazing Race despite whatever happened with Survivor.

While TAR 31’s cast consists entirely CBS reality star pairs, the show appears to be returning to a typical season of regular players for TAR 32.

Typically we choose teams that have known each other a minimum of one year. We choose relationships that are “relatable”. For your best chance of getting on the show, please refer to past seasons 1-30.

DO NOT APPLY IF YOU CAN NOT TAKE OFF WORK TO FILM THE SHOW!

Anyone age 21 and up can apply with a teammate.

The casting site’s FAQ refers to season 31 in its answers. For example, it says, “The filming dates for the season we are casting are sometime between May 30th and June 30th 2018, for approximately 25-30 days.”

Casting director Lynne Spillman posted about this on Instragram this week, and in one of the comments, said that finals casting will be later this month followed by production in November. 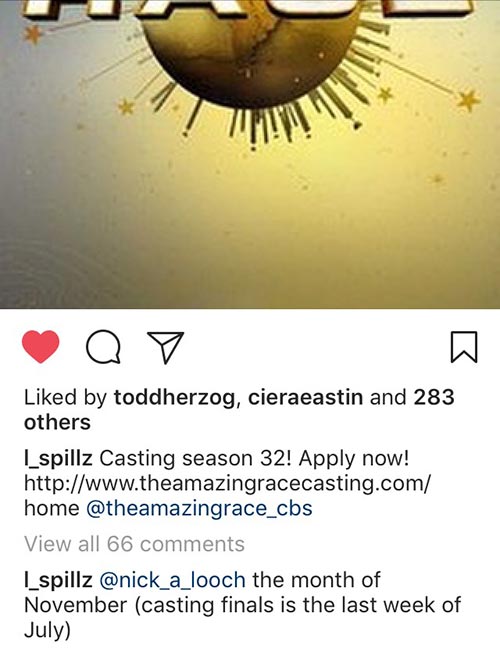 Several past CBS and non-CBS reality show contestants responded to that post on Instagram and suggested themselves for the cast.

That included Jessica “Sugar” Kiper, who came in third on Survivor Gabon, who wrote, “My husband and I would be perfect, except, by the end of traveling for the first 24 hours, we’d be threatening divorce… but that’s probably good tv.”

American Grit season two competitor Michael Morgan posted “You willing to give two American Grit competitors a chance?” and added “our contracts are null and void! We definitely played Grit with strategy, skill and determination.”