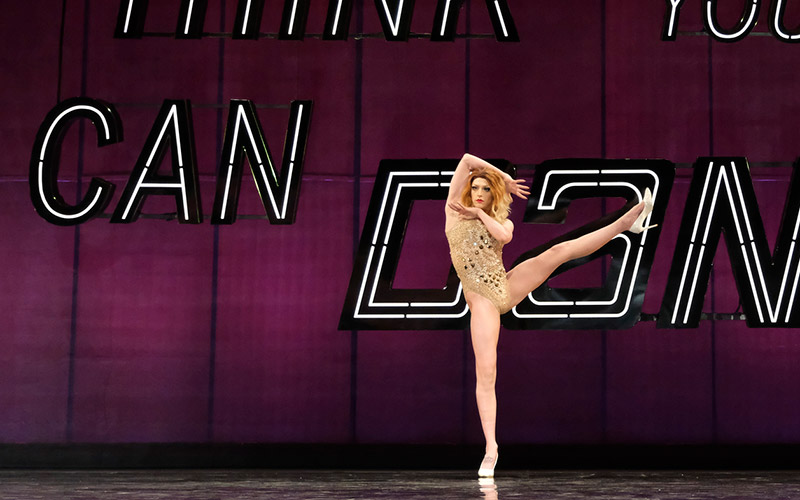 Laganja Estranja auditions on So You Think You Can Dance season 15's premiere. (Photo by Adam Rose/FOX)

What was a pretty standard premiere and audition episode for So You Think You Can Dance had two surprises: RuPaul’s Drag Race season six contestant Laganja Estranja auditioned, and Nigel Lythgoe didn’t freak out.

During the SYTYCD season 15 premiere, Laganja Estranja introduced herself at “Miss Estranja,” excluding her marijuana-referencing first name. In an apparent reference to her stunning dress, Nigel asked, “Have you been wearing this outfit all day?”

“We can’t wait to see you dance right now,” Nigel said, and then after the performance, started the critiques with this:

“You made my eyes water three times in that routine. The first one was the shablam, the second was the sort of jump split to the back”—”I call it a donkey kick,” Laganja said—”and then the flying split jump. You will certainly make an impact on this program, for sure. I’m not sure it’s going to be going to the academy, though.”

“You come back with more tools under there,” Mary Murphy said.

“The strength and courage with which you represent yourself and represent your community is second to none, and that, I’m very proud of you for,” guest judge Stephen “tWitch” Boss said. “Now, when we start putting you against other dancers, the jazz wasn’t that strong.”

While Nigel voted no, Vanessa Hudgens voted yes, and tWitch said yes after Miss Estranja said she was able to do other styles, too. After some encouragement, Mary Murphy to vote yes too (“It’s crazy, but I’m crazy. It’s a yes.”)

After the audition, Laganja hugged Nigel and said, “Get ready: I’m coming for you, Nigel.”

According to the Drag Race historian in my living room, Laganja exited the auditorium with a call-back to the same she thing she said walking into the RuPaul’s Drag Race season six workroom. “Come on season 15 of So You Think You Can Dance! Let’s get sickening,” she yelled, and then did a death drop.

When Nigel voted no, he referred to Laganja by her performer’s first name, “Jay,” his only misstep. (The show’s official YouTube page did title the video “Jay Jackson Demands The Stage”).

I barely noticed because I was so proud of Nigel for not freaking out about a performance that challenged gender norms.

You may recall that it was a decade ago that Nigel said in an interview, “What I don’t like on the dance show, to be frank, is effeminate boys that mince around the stage. I don’t care if they’re gay or straight.”

A year later, he responded poorly when two men danced together. He said, among other things, “I’m certainly one of those people that really like to see guys be guys and girls be girls on stage.”

He later said he regretted his word choices, but defended his rejection of effeminate men.

Tonight on SYTYCD, a man who talked about embracing his femininity (“When I fully embraced that yes, I am a feminine male, I put on drag for the first time ever.”) later danced on the stage dressed in drag and Nigel didn’t freak out. That’s growth—or at the very least, considerable contrast from what happened repeatedly 10 years ago.