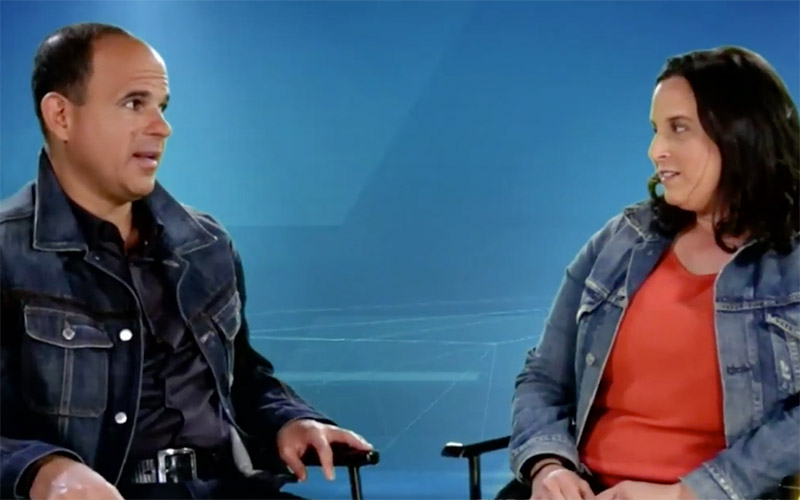 The Profit star Marcus Lemonis and showrunner Amber Mazzola, during the An Inside Look: Worldwide Trailers episode.

More than a few reality shows have turned their reruns into quote-unquote new episodes by adding commentary and behind-the-scenes tidbits, often borrowing Pop-Up Video’s style. Sometimes they add value; sometimes they just clutter up the DVR (I’m looking at you, Project Runway).

The most successful of these for me has been RuPaul’s Drag Race Ruvealed, which I like better than the first-run episodes, because they tell us more about what the rules, time constraints, and other things the contestants are dealing with.

The Profit returns next week with new episodes, but Tuesday night, it aired a rerun for a season-two episode with some behind-the-scenes content, with the title, “An Inside Look: Worldwide Trailers.”

It was terrific television.

Instead of on-screen text, it had commentary from both Marcus Lemonis and showrunner and executive producer Amber Mazzola. They watched the episode together, both wearing jean jackets as they discussed everything from Marcus’ hair to whether or not the business and its owners were selected just because of all of the drama.

There were behind-the-scenes details, like the fact that Marcus was sick with a fever during production of the episode, and also introspection, like Marcus analyzing his behavior during a moment and saying, “I was probably more agitated and embarrassed.”

What was so wonderful about this was that it showed viewers the common behind-the-scenes dynamic and tension that exists between star and showrunner. I first saw that on set with Trading Spaces in 2002: One person wants to decorate a room, the other wants to make a TV show, yet they have to work together.

Those competing interests on The Profit were captured perfectly in this exchange:

Amber: “I was entertained by them. Look, it’s always been hard for me becaue I want a great, fun, entertaining episode—and I still want you to do well. That balance of good TV and something bad for business…”

It wasn’t just that tension that made this a terrific episode, though. Marcus and Amber clearly have respect for each other as professionals, but also deep affection for each other. They mocked each other, and that dynamic provided more entertainment than some of the actual episodes of The Profit.

Toward the end, Marcus asked Amber, “Are you proud of yourself for that episode?” Referencing the bickering, fighting owners, who were also exes, Marcus told Amber, “as a producer, you look for crazy like this.”

And then he realized something: “I’ve actually come to the conclusion that there are many moments when you’ve actually set me up.”

“I would never do that,” Amber said, and then broke into laughter. And the episode ended with a winking admission that it is both Marcus’ real life and a TV show that has to be produced.

I’m looking forward to more new episodes of The Profit last week, but I also wouldn’t mind if, instead of new episodes, we got more of these “Inside Look” episodes.

This is also a format I’d love to see other reality shows adopt, even if just for a special episode now and again. Thanks, The Profit, for pulling back the curtain and letting us see the relationships behind the camera.