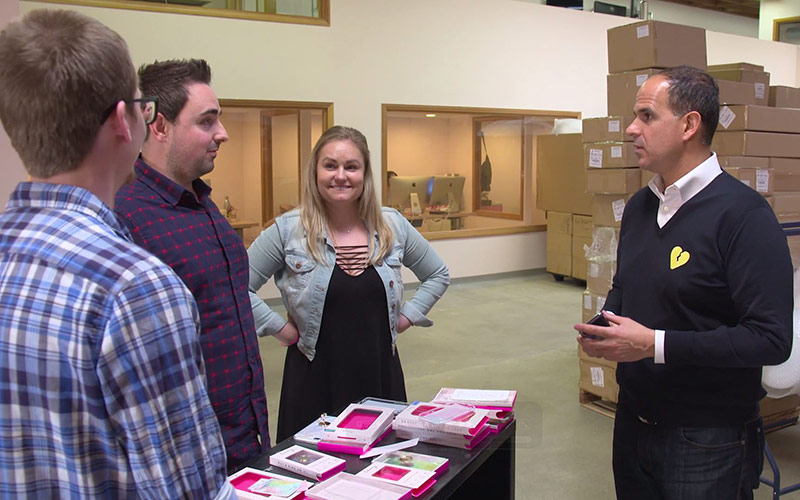 “That’s a yes,” Marcus Lemonis said to the founder of The Casery, Matthew Harlow, on last night’s wildly entertaining episode of The Profit.

He was accepting an offer—but not to be partners. Instead, it was to dissolve the agreement they had. And there was a reason:

“Because you’re a smug prick,” Marcus said to Matt.

Referring to Matt’s business partners—creative director Charlotte Hennington and COO Skyler Milligan-Lecroy—Marcus added, “and you have disrespect towards her, and disrespect towards him, and they’ve done nothing but eat from a bag of shit since I met you.”

The episode began skewering the founder of cell phone case company The Casery almost immediately; seconds after he introduced himself to Marcus, Matt Harlow admitted not knowing about half of his employees’ names.

His company had high profit margins and considerable sales, but wasn’t doing well, and a lot of that was blamed on Harlow, who was a near-comedic figure, in an “are you kidding me?” way.

Instead of paying himself, he used company funds for things like meditation course, and was unapologetic about that; he also didn’t want to expand his business to make cases for everyone, instead preferring to stick to designs targeted toward young women with stereotypically gendered colors and patterns.

In the edit’s version of the story, Harlow’s obtuseness about his own business was counterbalanced by his aloofness about the money he was spending—and how he was spending his time and attention.

And it was often very funny.

The effect was like hearing someone describe the ultra-modern and architecturally advanced skyscraper they were designing and illustrating that design with a pile of broken cookies.

It’s no surprise that Marcus Lemonis became so frustrated, and at one point channeled Kevin O’Leary by demanding a royalty as “insurance.”

When the four of them met to talk about a problem, Harlow admitted he didn’t plan on being at work that day because he had other plans, which he described with this wonderful business buzzword word salad:

“I had a two-day training on scheduling. So, it’s a program that is used for people who have, like, incredibly busy lives, in order to, like, live an empowering context for scheduling. So, but really, at the end of the day, it allows you to get more done in less time, and be specific with what you get done. Which is a good thing.”

Charlotte Hennington responded with what I was thinking: “Yeah, but you do a lot of bullshit training and courses.”

The kicker: The company paid for that bullshit course, which cost “$700, $675,” Harlow said, never good with the numbers part of the business. He is, however, apparently very good at yo-yoing: he was the world champion when he was 16.

The Profit will be continued

Marcus structured the deal so that he wouldn’t have a majority stake, but would control the company, because he’d control Charlotte and Skyler’s board seats. And together, the three of them owned 51 percent of The Casery.

But that deal fell through, and Marcus said he got back his $150,000 check that he wrote when there was a sudden cash flow problem.

The episode ended with a “to be continued…” title card after Charlotte called Marcus with an idea: “Skyler and I talked this morning and we’d love to partner and leave The Casery.”

Both Charlotte and Skyler’s Linkedin pages show them as founders of a new company, Everkin, which is described on Linkedin as “an International Phone Case Accessories Brand.”

The company’s web site has not yet launched and only offers an e-mail list sign-up form right now.

The last four episodes of this season don’t yet have titles, so perhaps the creation of Everkin will be featured in one of those—or perhaps it’ll be included in a future follow-up.