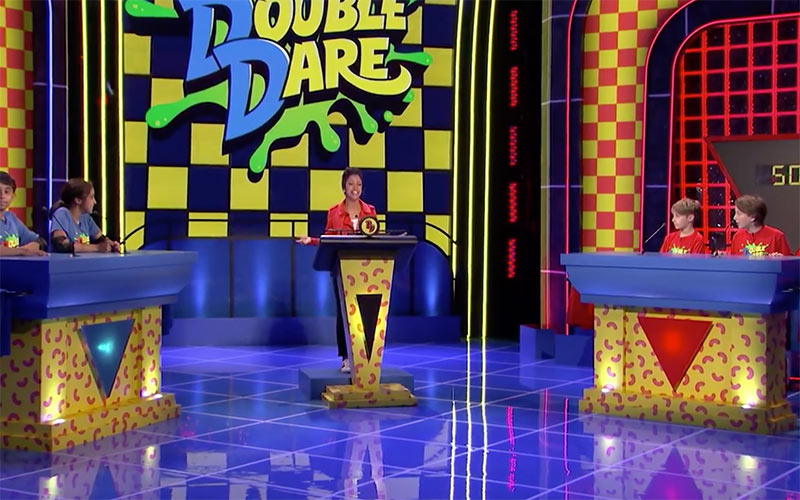 “On your mark, get set, go!” With those words, Double Dare was back on Nickelodeon.

And though they weren’t spoken by its original host, Marc Summers, but instead by new host Liza Koshy, the rebooted version of the original kids’ game show did an excellent job of balancing the old and new, from hosts to the obstacle course.

All of the elements of classic Double Dare were back: the shiny, slippery blue floor; Edd Kalehoff’s original Double Dare theme song and score; walls of glass bricks behind the contestants; scoreboards with digital clock-style numbers.

Those scoreboards were LED screens, though, as were some of the backgrounds on the set. That’s an excellent example of how the production retained elements of the original while updating for a new, younger audience.

This audience is so young that it’s possible their parents were their age when the show was originally airing, and I’ll just leave that sentence here to sob about later.

At first, Marc seemed to be in the role of Harvey, the show’s announcer who did things like telling us about fabulous 1980s prizes, such as a trip to Space Camp or a brand-new VCR.

Although I understood why the show would bring in a younger host, the air drained from my childhood balloon when Nickelodeon announced that he was being replaced as host—especially because I knew Marc was more than capable of hosting with the same energy he had in the 1980s.

But Marc’s role was much greater than I expected, and he is much more than that of announcer.

In the original version, Harvey’s podium was near the audience’s grandstand, but Marc’s was placed stage left, with a podium larger than his old one. From there, Marc could easily step into the action, which he did several times.

He joined Liza in introducing and calling some of the challenges, but also didn’t take over.

Liza can absolutely hold her own as host, whether she was at the podium or directing kids through the obstacle course as that 60-second clock ticked. She felt as comfortable as Marc always has been, and although she was often delivering pretty much the same lines as he was, she made them her own, an impressive feat.

She hit all the right notes, from enthusiastic cheerleader to challenge judge, and her rapport with Marc felt natural and playful. Liza gently mocked Marc at one point when he chimed in with “dad jokes.”

There were a lot of nods to those of us who grew up with Double Dare, and by nods, I mean references and jokes about how old we all are.

Liza wouldn’t let us forget that—if my math is right—a 10-year-old in 1986 could easily have a 10-year-old kid today. In the first two episodes, she said, more than once, a version of “you know it, your mom knows it, your dad knows it.”

One physical challenge involved comically large diapers, and Marc joked, “Where I live, a lot of my friends wear those.”

There was more old than new, it seemed. The game design was unchanged, with two rounds of trivia questions interrupted with physical challenges, and an obstacle course for the winners.

Trivia questions sometimes often seemed to be written for (or perhaps by?) people my age, another nod to the show’s original fans, whether they were watching with their kids or, in my case, with their cats.

I’m not sure I noticed this when I was a kid, but Double Dare always threw in tough questions to try to force teams to dare and then go to a physical challenge, since that was the fun part of the show. The harder questions were often those with pop culture references that were, well, less current than others.

With that wonderful callback, I felt in good hands knowing that Nickelodeon, its executives, and the show’s producers know what they’re doing and know who’s watching.

The physical challenges were a mix of sloppy and not, and were delightfully low-budget. It’s not the best game design on television, but it is very true to the original.

I’m not quite as sold on all of the new obstacle course obstacles: an “unboxing” obstacle involved, well, opening a box, but I suppose the original had some easy ones mixed in.

And it’s worth noting that—mild spoiler alert—neither team on the first two episodes came close to finishing the obstacle course, so it’s clearly difficult. (I may or may not have been screaming at them to go faster! Come on! What are you waiting for? Do you need me to show you how to do it? Oh please can I run the obstacle course?!)

The obstacle set pieces were updated, to varying degrees of success.

The new hamster wheel used slime instead of lights to indicate progress, a nice touch, but the new version of The Wringer added a second wringer instead of a ramp, and there were big gaps between the rollers, and it just didn’t work as well.

As they navigated all of this, Double Dare’s contestants were perfectly awkward—not coached, not produced, just being themselves. In the second episode, one of the contestants couldn’t stand up after a challenge, and just laughed and laughed as Liza and Marc tried to help her.

That made me laugh, and I was already thrilled because Double Dare works as well as it always did, and because it did not forget us, its original audience.

Is this still interesting for kids? I really hope so. The kid in me certainly felt, by the end of two episodes, like he’d gone down a spiral slide and careened into an ice cream sundae of joy.