The wave of nostalgia washed up two 2000s-era reality shows this March. Both unleashed teams of experts into middle America to fix problems. Only Queer Eye, though, adapted itself to the present moment, and in doing so became the reality TV show that the world needed.

In its eight episodes, Queer Eye became not just a breakout reality show for Netflix, but the best new reality TV show of 2018. But Trading Spaces aired eight episodes of what might as well have been repeats of TLC’s breakout interior design show, that’s how unchanged it was.

At their core, the shows are similar structurally: teams spend a few days making over people (Queer Eye) and their spaces (Trading Spaces and Queer Eye). Neither show is really attempting to teach viewers—there are occasional takeaways and tips, but the goal is not to become the Barefoot Contessa of home decorating or life coaching.

Both shows also leaned heavily on community and family: between the cast members (the Fab Five; the “Trading Spaces family” of designers), and among those they interacted with.

As the Fab Five bonded with their subjects, they brought families and sometimes bigger communities closer together.

But the Trading Spaces version reveled itself to be empty: Because of a truncated run of episodes, and a parade of new members, the “Trading Spaces family” that Paige Davis kept welcoming people to didn’t have much of a chance to interact, except at the reunion.

More importantly, their work did nothing to foster community among the pairs of neighbors they worked with.

Instead, Trading Spaces was comically hostile to it, with more than one designer noting how they’d be long gone by the time homeowners learned what the designer had done to their room.

The couples, wearing their brightly colored Trading Spaces smocks, have virtually no say over what’s happening to their neighbor’s room, because designers are simply executing their plans. The better designers took the homeowner’s needs in mind; the worst designers shrugged off any suggestions or thoughtful protests.

In the 2000s, I loved Trading Spaces for the way it pushed people out of their comfort zones and taught us new things, and I eagerly anticipated new episodes, watching and discussing them with anticipation. I watched but didn’t love the original Queer Eye.

Today, it’s the opposite.

When it premiered in 2003, Queer Eye for the Straight Guy was revolutionary, but the original series and its tangle of stereotypes has not aged well.

In its new version—both season one and the second season that just premiered—Queer Eye has effectively dispensed with stereotypes, gay and straight, and embraced something far more current: people helping people live better lives.

Though most of their subjects have been men, in the reboot’s 16 episodes, they’ve also made over a gay man, a woman, and a transgender man.

What’s definitely clear is that this is no longer a show about gay men teaching straight men.

Sure, there’s still a layer of superficiality, new furniture and a haircut. Yet there is surprisingly little makeover for a makeover show! On the opposite ends of the spectrum are Bobby’s interior designs, which are absolutely stunning but essentially apparate from nowhere, and Antoni’s cooking demos, which could be replaced by Tasty videos or just deleted and no one would notice.

The new Fab Five— Antoni Porowski, Tan France, Karamo Brown, Bobby Berk, Jonathan Van Ness—are all wonderful television characters who aren’t there to merely cut hair and redecorate, though they certainly do those things and do them really well.

Instead, the show constantly breezes past the superficiality to point out—sometimes directly—that the exteriors of our lives are often just reflections of the interior. And the Fab Five have shown up to connect our inner lives, to find threads of humanity and weave them together.

The major differences between the Fab Five and their subject is not their sexuality, but their confidence. This new, truly diverse Fab Five comes from a variety of backgrounds. They can help others find their strength in part because they’ve been through the process of learning to love themselves in a homophobic world that wanted to figuratively and/or literally beat the gay out of them.

“It’s going to inspire so many other people to be their authentic self,” Karamo says in season one. He’s talking about AJ, the gay man who appeared in episode four, but Karamo is really describing what Queer Eye now does so well.

Nothing about the show is subtle, but the new cast does their emotional work subtly, building little stacks of meaningful details, personal stories, and emotional moments.

Eventually, there’s a point at which someone says a thing that knocks over the tower and triggers a tidal wave of emotion. (I wonder if Netflix has data about what percentage of Queer Eye viewers are crying by the end of each episode. Even episodes where I thought I wasn’t going to get emotional—boom, there it was.)

Though Queer Eye has floated some Big Issues—how police interact with people of color, how religious institutions rejected people—it anchors those balloons firmly to the lived experiences of its permanent and episodic cast.

They are not climbing to the top of moral high ground and lecturing, they’re making statements about their own lives by sharing stories. And that creates connection not just with their makeover subjects, but with us.

The person who does this the best, and the show’s breakout star, is Karamo, who you may recall not remembering from music television’s The Real World Philadelphia.

Karamo has a way of zeroing in on a person’s experience and connecting it to his own. He does that without doing a thing I do too often: jumping on top of someone else’s story with a Oh me too! Listen to what happened to me!

All of this does occur in scenes and pairings obviously set up by the production, which has cast the show’s subjects extremely well. It rarely comes across like the clunky heavy hands of a producer trying to create a moment, as happens on so many other reality TV shows.

Queer Eye’s worst choice came in season one, when producers had the Fab Five meet the nominating friend by having that guy, a police officer, pull over their car. The scene, which came at the beginning of the episode, was tense and brutal, because Karamo, a black man, was driving through the south without his driver’s license.

That Karamo was driving was completely a coincidence, he told BuzzFeed, and producers only told one of the Fab Five, not Karamo, what was going to happen. The effect, though, was to “put me in a state of, Here goes another asshole white cop,” as he said on the show.

But even that forced moment eventually gave way to a meaningful, heartfelt conversation, which ended with the police officer/makeover subject Cory telling Karamo, “If we could sit down and have a conversation like me and you just did, things would be a lot better in society. Everybody wants to talk but nobody wants to listen.”

This Fab Five is there to listen, and they’re putting on a master class that we can all learn from.

This is, alas, where Trading Spaces fails.

There was a lot of doing on Trading Spaces, but very little listening or caring.

For its reboot of Trading Spaces, TLC brought back the original series nearly unchanged. I fully appreciated this choice. I do think they erred by ordering just eight episodes and then packing them with both old and new designers, plus guest designers, which meant most designers appeared just once.

As the season wore on, though, my excitement faded almost immediately.

We’re getting back our comfy old reality TV sofa! I thought. And then someone dragged it in, and there it was: a sofa from the year 2000. What was once new and exciting and so comfortable to slide into every Saturday night now seems faded and antiquated.

The irony, of course, is that Trading Spaces has been eclipsed by all the DIY and makeover shows it inspired. It launched a revolution, and then showed up only to realize the revolution moved on without it.

The scenes show minor progress, but not significant labor. There are not takeaways, nor much of a focus on technique.

The transformations were sometimes incredible, sometimes just okay. Nothing was truly horrifying this season; there was no broken glass sprinkled onto the floor, nor chairs made out of shellacked cookie dough, though Hildi did make decor out of egg shells. 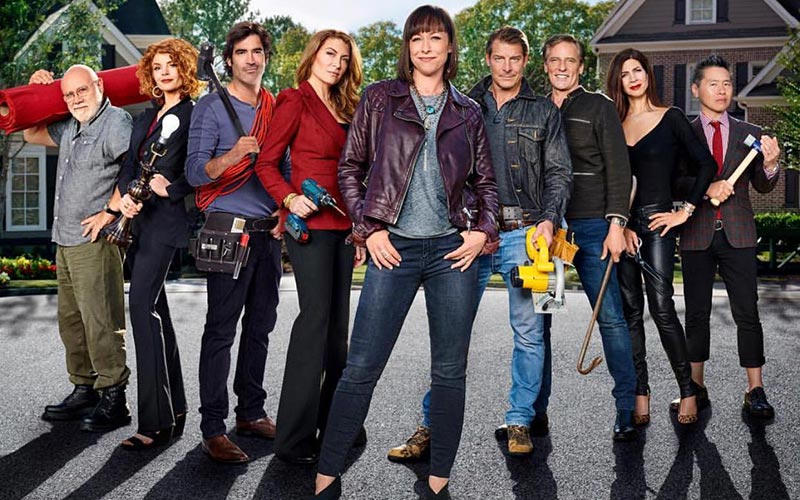 While there was a some creaky, tone-deaf humor, there were also fun moments—the season finale homeowner who loved Doug Wilson and found out he was designing her space was a highlight—but I was left wondering: What is this show for, exactly? Who is it for?

At the end of many episodes, as a couple struggled with what’d been done to their space—whether it was beautiful or not so much—I wondered: Why did you sign up for this show? Why let someone wreak havoc in your space?

And then I wondered: Why did I watch this show?

Trading Spaces kept emphasizing that the neighbors were responsible for what happened to their friends’ room, except that was undercut by the obvious: the designers show up with the spaces already planned and purchased, and the show is merely about execution.

Sure, add a lamp from Overstock.com, but that doesn’t change the rough edges on the pattern that’s now scarring the walls.

Trading Spaces offered no investment, no connection. The designers didn’t share much about themselves, or their inspirations, or their motivations. Sometimes they said they were trying to address the homeowner’s needs, but didn’t let us see their creative process.

They just did the work, and had some minor conflicts and moments of tension. In the end, it was just strangers painting walls, and that is far less satisfying than it was in 2001.

Both of these rebooted makeover series may have the same DNA as the original versions. Queer Eye, by changing its cast and refocusing its mission, gave us a new generation of television that may just help us all be better people. Trading Spaces just showed its age.