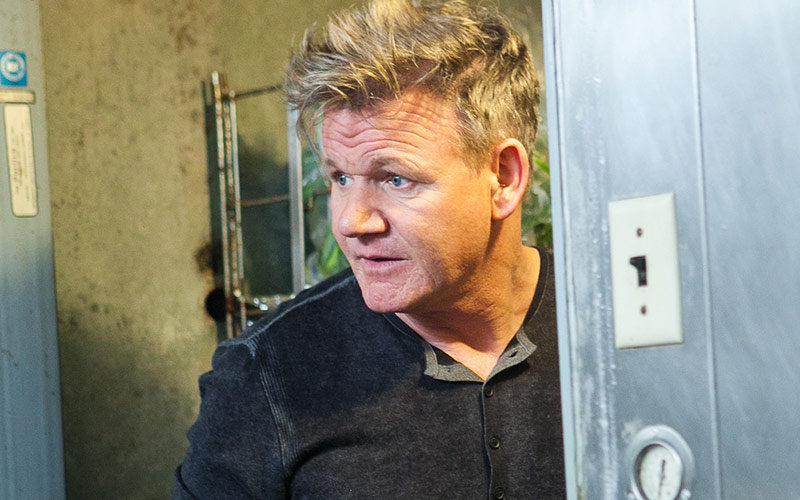 Gordon Ramsay at Bella Gianna’s on the season premiere of his new Fox series 24 Hours to Hell and Back. (Photo by Fox)

That ended, mercifully, in 2014, though the basic idea lived on in three seasons of Hotel Hell.

Ramsay never went anywhere, continuing with the infinitely looping track of incompetence and perpetual exasperation that is Hell’s Kitchen, and taking breaths during Masterchef, a competition that is gentler but stretched so much to fill 42 minutes that you can see right through it.

Tonight, Ramsay is back with Gordon Ramsay’s 24 Hours To Hell and Back, a new Fox series that is simply his old Fox series, Kitchen Nightmares, with a new name that mostly seems designed to cover for behind-the-scenes changes (it’s now produced by Ramsay’s production company, not A. Smith and Co.).

It is changed only by the addition of a semi-tractor trailer with a kitchen that’s called Hell on Wheels, and with a compressed timeline illustrated by countdown clocks set up around the restaurant.

Three-quarters of the restaurants Ramsay attempted to rescue on the old show failed, despite having several days worth of help, so it makes sense to shorten the time available to help the restaurant succeed.

The format is typical: Ramsay goes in, this time undercover, with a fake family and fake mustache that has more surprise and personality than the rest of the series. He calls the food awful; he look around and is horrified by what he finds—Wow. Damn.—and then introduces a new, simpler menu in-between asking people what is wrong with them and trying to get them to yell and/or cry.

Meanwhile a crew renovates the restaurant, which comes across as the production’s recompense for subjecting the owners to the demands of production, never mind the inevitable hatchet job that the editing will do to the reality of the situation. (These are real restaurants with real problems, run by real people with real emotions, but that is not enough for Fox, CYMBAL CRASH, SMASH CUT, CYMBAL CRASH.)

I’m not sure who the title refers to going to hell and back, but after watching the premiere, it certainly felt like it was a description of the experience watching it.

The format is so stale and so noxious that if Gordon Ramsay found this show in a refrigerator, he’d start making gagging noises and throw it into the bin.

Ramsay has been surrounded by the trappings of American reality TV, circa 2018, including fake crowd noises, added in post-production, and so ineptly that I did a triple-take in my living room, wondering where a gaggle of gasping people was, since they most certainly were not on the screen.

There’s also dialogue dubbed in during post-production to over-explain the obvious; an ambush twist stolen from Restaurant: Impossible’s final two seasons; and a time constraint, which makes no sense except to increase tension and decrease the show’s budget.

True hell, though, is watching something that was once so pure be mashed into something unrecognizable. The original UK format has been combined with so many artificial additives it makes Mountain Dew seem like spring water.

I decided to cleanse my palate by going back to the very first episode of Ramsay’s Kitchen Nightmares, and settled in for an hour of charming, relaxed television that lacked any of the desperation of US reality TV. And there certainly was a quietness to the show, in part because of a demure soundtrack and longer, more developed scenes.

My sense was that, in the 14 years since, Ramsay had became an infinitely heightened version of himself, piling on the melodrama once he arrived in the States, so I was ready to be re-introuduced to the old Gordon Ramsay.

But no: In that very first episode, he eats a scallop and then goes outside to spit it out, with a chorus of heaving noises for effect. There’s the same horror that the staff keeps the fridge full of garbage, the same insistence that bad food could kill someone.

Hearing those same things over 14 years and dozens of episodes has definitely blunted their impact. (Has anyone actually ever died in any of these restaurants?) But even then it seemed exaggerated, like Ramsay was winking to the audience while trying to make a point to the people he was helping. He hasn’t changed, at least not dramatically.

The most noticeable shift in the 14 years since that show premiered is in the time allotted for Ramsay to help a restaurant.

It’s been collapsed from one week to one day. And squeezed out of the middle is nearly all of Gordon Ramsay’s charm, and any of his concern about the restaurant and food beyond using it as a prop to throw or gag on.

Today, and in his Fox Kitchen Nightmare years, he may be deeply committed to helping train chefs about how to cook properly; and his new menus might be designed to take advantage of the chefs’ skills and specialties; and he might offer salient advice about how to run a restaurant properly.

But the television show cares about none of this.

The television show—Kitchen Nightmares, Hotel Hell, Gordon Ramsay’s 24 Hours to Hell and Back, whatever they’ll call the next one—cares about finding commotion it can highlight and turning it into near hysteria with its phony reaction shots and aggressive soundtrack.

During a restaurant’s televised relaunch, and I’m not using that word with any seriousness, there’s always an 11th hour problem or conflict that threatens to derail the train. But it’s such a false note because the train was never on the tracks to begin with, and it’s absurd to imagine that anything has changed in part because we haven’t been allowed to see any change.

Again, I find it difficult to believe that true transformation can take place in 24 consecutive hours. But if it truly does, the editing of the episode doesn’t give attention or focus to that change. Because who CYMBAL CRASH wants to watch that?

2004 Gordon Ramsay knew how to make compelling, even shocking television, but that was always balanced by an abundance of concern for teaching incremental changes and discovering what was and was not working about a restaurant.

2018 Gordon Ramsay is merely another piece of stagecraft used to assemble television that thinks it’s shocking, but has instead become rote and predictable.

In the premiere of 24 Hours to Hell and Back, Gordon Ramsay says in voice-over narration, “I need to treat the source of contamination now, before it’s too late.”

It’s too late. Time to close the doors on this one.