Skip to Content
Face Off judges Neville Page, Ve Neill, and Glenn Hetrick during season 9, because Syfy doesn't have any pictures of the judges from this season, because why promote a show you're airing? (Photo by Justin Stephens/Syfy)

More than 12,000 people have signed signed a petition to try to save Face Off, the Syfy special effects makeup competition series, which the network unceremoniously cancelled by revealing that season 13 would be its last.

Dwight D. Smith, one of its executive producers and the c0-founder of its production company, Mission Control Media, told me that “the outpouring of support and passion from our fans has been incredible. We always knew that Face Off had really, really passionate, hardcore fans, and I think they’re proving that to be true.”

“It means a lot to all of us on the show to hear their disappoint, their sense of loss, and their hope to keep the show alive,” he added.

The bad news: Syfy owns the show and format, which means it’s highly unlikely it would be revived by, say, another network or Netflix.

And Syfy’s programming priorities seem clear, at least to me: After Face Off ends, there will not be a single reality or unscripted show on the network.

Why was it cancelled? “They haven’t given us a lot of information on that,” Smith said. “Our business as a whole is really challenging right now. Ratings are down across the board,” he added, and “ratings on Face Off had been trending downward.” (That’s true of most TV shows, as the number of programs and outlets has increased.)

Was the show nearing the end of its life anyway? Perhaps running out of contestants, as some viewers have suggested?

Smith doesn’t think so. “I personally feel like Face Off still has a lot of gas left in the tank,” he told me. “There’s tremendous potential for the show to go far beyond where it is now. So for us, it’s disappointing, at least for now, we won’t be able to do that.”

As to the contestants, he said “it’s always been a fairly limited talent pool because it’s a very specialized skillset, and it’s something that takes a fair amount of practice and training and study and education, in order to master at a certain level. I think there are certain seasons we’ve seen stronger people than others.”

“When you put people on the show, there are always some people who blow you away because you weren’t expecting that level of talent from them. And there are other people that you have high expectations for, and sometimes they don’t deliver,” Smith said.

“The world of Face Off is a very specialized world—it’s not what you go through in the real special effects make-up world. We have very heightened deadlines and very short timelines, and I think that’s where certain people excel and some people get tripped up,” he added.

Face Off, which debuted in 2011, was actually helping to create its own future contestants, in the same way that RuPaul’s Drag Race has inspired people to become drag queens and then apply to the show where they learned about drag.

“One of the great things about Face Off is that we started to generate our next wave of contestants because there were viewers who discovered this as an art form, and started going to make-up schools and started to do it because of the show,” he said.

“So there’s always a new wave of artists coming along.”

The idea for Face Off: Battle Royale—and future seasons

Face Off: Battle Royale (Syfy, Tuesdays at 9) has returning contestants and an epic title, but it was not planned as the final season.

That’s because producers “did not know when we went into production” that it would be cancelled, Smith told me.

Still, citing the strength of the contestants and the final challenge and said, “If this had to be the last season, it’s a pretty good one to go out on. … The final challenge this year is really exciting. It’s a great payoff.”

The twist this season is that Face Off has individual, um, face offs in each episode.

I asked where that idea came from. “We’re always looking for ways to add a layer of creativity or freshness to a season, without changing a show too drastically,” Smith told me.

“It felt to us like a fun way to keep the show at its core but to add a new layer of competition that would be kind of fresh and interesting,” he added. “At this point, the audience has learned enough about what makes a good makeup, what makes a bad makeup; they’ve learned all about paint jobs and edges and all of that stuff, so it has a nice play-along element for the home audience, because when you’re looking at those two make-ups side to side, you can say, I like that one better, or I like that one better, and here’s why.”

For me, that makes this season somewhat similar to one of the all-time great reality shows, The Chair, which gave two directors the same script, from which they produced two very different feature films.

“I’ve always found it absolutely fascinating to watch people who are given the exact same creative challenge and how they approach it from such different perspectives, and where they end up,” Smith said. “I love watching creative people work, and how their minds work, and seeing where their minds take them.”

With the series coming to an end—for now, at least; perhaps Syfy might revive it in a few years, if this whole scripted thing doesn’t work out—I asked what what he’d like to do if they could produce the show with an unlimited budget and no constraints.

For now, though, his production company will move on to other projects.

Mission Control Media also produces Hollywood Game Night, which is returning to NBC for its sixth season, and they’re also working on an as-yet-unannounced Netflix series and several pilots, including one for truTV starring Ken Jeong that will be a “comedic take on medicine,” Smith said.

How the cast was chosen; saying goodbye to the crew

This final group of returning, all-star Face Off contestants were chosen because they still had “something to share, something to show,” Dwight Smith told me. Producers wanted “to feel that we were bringing in a deep bench of talent that was going to do great work.”

Plus, he added, “a lot of them were just great personalities, people that we, along the way, had gotten to know and love as producers.”

They were returning to an tough environment.  “For the artists, it is a brutal schedule,” Smith said. “It’s really intense. It’s intense for our team as well.”

The show’s 250- to 300-person crew worked on two three-day episodes back-to-back, followed by one day off—though that day was often used for contestant interviews, so not all of the crew nor the contestants got a true break. 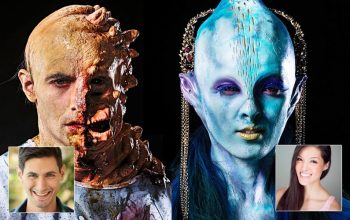 A day in the life of a Face Off Model

“We’re really fortunate on Face Off that a lot of the crew and staff have been working on it since season one,” he said.

“It’s a really, really tight-knit group of people who really love what they do and are really good at what they do. In that regard, there’s a real sense of loss, because all of those people love the show so much, and have grown so attached to it.”

The show has given viewers an on-screen glimpse of that crew through the models, many of whom have been on the show for years.

“They are so amazing,” Smith said of the models. “I know it looks fun, but what they go through is excruciating, or it can be.” That’s because they often work 12-hour days, sometimes starting at 5:30 a.m., with makeup that can make it hard to eat, drink, or go to the bathroom.

“They always elevate the makeups, and they’re just such a great group of people. We love them and they are a big part, an important part, of the Face Off family,” he added.

The 13 seasons of Face Off they’ve produced together “been a real long part of a lot of our careers, and it really means a lot to us. It’s just a really, really great group of people,” Smith said. “It’s going to be sad not to see everybody.”