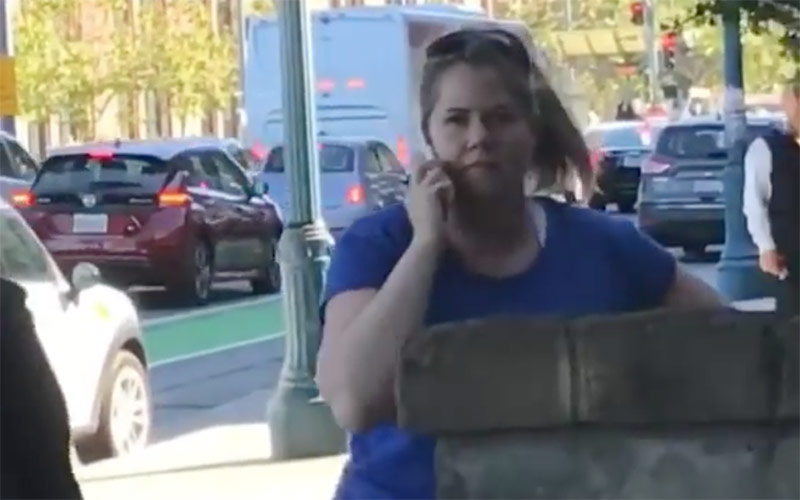 Alison Ettel, nicknamed #PermitPatty on Twitter, in a viral video of her calling police on an 8-year-old girl

A white woman who was caught on camera calling police about an 8-year-old black girl who was selling bottles of water is a cast member of an in-production documentary that’s following women who founded businesses related to marijuana. Update below: She was dropped from the film, which is called Lady Buds: Women Elevating the Cannabis Industry.

Alison Ettel has been nicknamed “Permit Patty” and has been trending on Twitter after the girl’s cousin posted a video of Ettel hiding behind a sidewalk planter while on her cell phone.

The woman filming the video says Ettel is calling police on an 8-year-old, and tells Ettel, “You can hide all you want. The whole world gonna see you, boo.” In the video, Ettel stands up and replies, “Illegally selling water without a permit.”

The girl was selling water in front of her home, which is near AT&T Park in San Francisco, where the Giants played a game this afternoon. Her cousin also posted this video of her:

And this is my little cousin just so you guys can see pic.twitter.com/yQEEB8uZ2A

One reason this incident has gotten attention is that it is the latest in a series of stories about white people calling police on black people who are just living their lives—such as the Yale student who called police on a fellow graduate student who was napping. These kinds of racist calls to police are quite common.

Ettel was interviewed by HuffPost, and said the girl was “screaming about what they were selling,” and said, “I had been putting up with this for hours, and I just snapped.”

“It was stupid. I completely regret that I handled that so poorly. It was completely stress-related, and I should have never confronted her. That was a mistake, a complete mistake. Please don’t make me sound horrible.”

Ettel founded a company called Treat Well, which says it “provide[s] the highest quality cannabis products for both people and animals” because of “the need for high quality, consistency and easy titration in cannabis-infused products.”

She is listed as one of the six women being followed for an in-production documentary that says it “follows the journey of six female entrepreneurs,” ranging from “multi-generational farmers to visionary entrepreneurs to medicinal marijuana activists.”

The documentary is seeking independent funding, and its page on Film Independent describes Ettel like this:

“Alison Ettel left her successful job on Wall Street after medical marijuana helped her out of a life-threatening coma.”

“Lady Buds is the story of six women who are transitioning from the black market to the legal market in the cannabis industry in California. From farmers to entrepreneurs to activists, these modern-day superheroes put principles before profits and challenge the cultural stigma around cannabis as they ‘come out of the shadows and into the light.'”

There is, of course, tremendous irony in someone selling marijuana—which is legal in California but illegal under federal law—calling the police on a kid selling water.

As the host of truTV’s Talk Show the Game Show, Guy Branum, tweeted:

“Things that white children do that are adorable become crimes when black and brown children do them. Crimes that create grounds for violence, searches, deportation and death. Think of all the times you broke the law in ‘harmless’ ways and realize our skin color protects us.”

Sunday, June 24, 9:30 a.m. ET: The director of the documentary, Chris Russo, posted to Facebook and Instagram a message that said, in part,

“To clarify our previous statement, Alison Ettel is no longer affiliated with the documentary ‘Lady Buds’ due to her racist and divisive actions. Our project is committed to social justice and there is no room for hate or discrimination in society, the cannabis industry, or our film. We are removing all content that remotely promotes her or her business from our various platforms and will be removing her storyline from the film and all film materials.”

This story’s lead and its headline have been updated to reflect that.