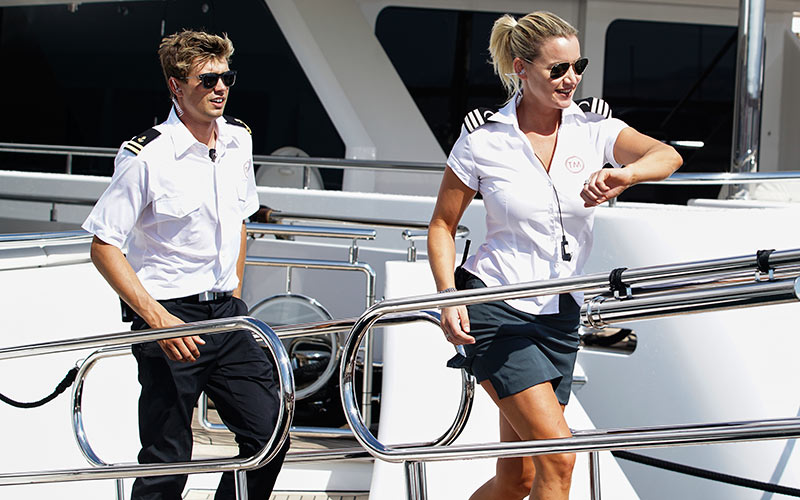 Conrad Empson and Hannah Ferrier on Below Deck Mediterranean. (Photo by Zev Schmitz/Bravo)

Good Monday morning. It’s the week of the broadcast network’s upfront presentations, so we’ll be learning more about fall schedules and renewals, such as the return of Big Brother Celebrity and this special edition of AGT.

But before there is fall there is summer, and several new and returning shows are coming your way this week.

Returning for third seasons this week: Below Deck Mediterranean (Bravo, Tuesdays at 9) and its boatload of shenanigans, and Total Bellas (E!, Sundays at 9), which is chronicling Nikki Bella and John Cena planning their wedding, though reality has caught up to the show because the couple just broke up.

A new series, Lost in Transition (TLC, Sundays at 10) follows four couples, each of follow their lives as one member of the couple transitions their gender identity from male to female.

The disappearance and death of Casey Anthony’s kid is the subject of the three-part, three-night series The Case Of: Caylee Anthony (Oxygen, Saturday to Monday). The network says the special’s “team will examine the key events in the little girl’s disappearance and mysterious death” and comb over the original investigative files, chase down witnesses, and consult with various experts who have firsthand knowledge of the case.”

In lighter fare, Iron Chef America is back (Food Network, Sundays at 10) and returns to its original format, while Michael Carbonaro continues to do magic tricks in front of people who don’t know he’s doing magic tricks on The Carbonaro Effect (truTV, Thursdays at 10).

There’s a wedding coming up Saturday, as American actor Meghan Markle and Prince Harry get married.

Besides being an actor on Suits, Markle was one of the briefcase-wielding models on NBC’s game show Deal or No Deal, and GSN is repeating some of those episodes this week (GSN, 11 a.m., May 14 to 18).

Royal Wedding Watch is produced by the BBC and will air nightly from London (PBS, Monday to Thursday from 10 to 11, and Friday from 10:30 to 11:30). PBS says it’s “hosted by American news anchor Meredith Vieira and British television presenter Matt Baker, who will update viewers on the preparations for the much-anticipated wedding.”

But former SNL cast members Will Ferrell, Molly Shannon, and Tim Meadows will mock it live but as fictional characters on The Royal Wedding Live With Cord and Tish! (HBO, Saturday at 7:30 a.m.).