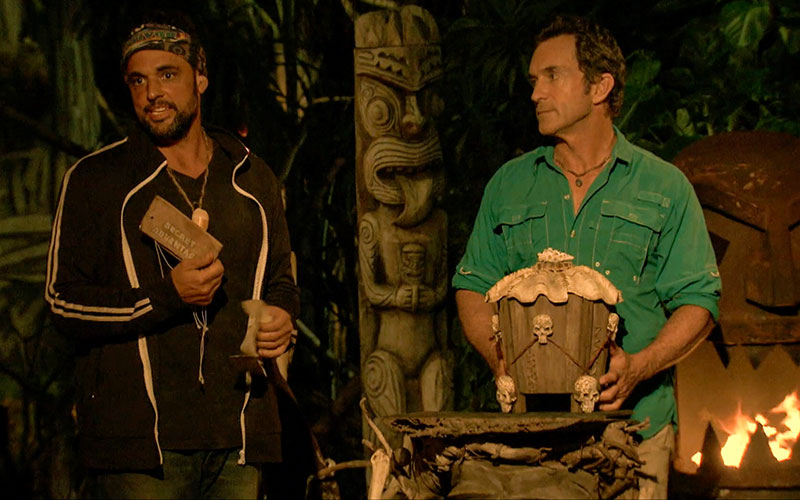 Do the Survivor producers rearrange the votes in the urn to maximize drama when Jeff pulls them out? —Michael A.

Yes. Jeff Probst goes to tally the votes, but he does more than just tally.

He takes the votes into a production booth, where other producers have been watching live feeds of Tribal Council—including the voting confessional camera. It’s located away from Tribal Council, so they can have those conversations in private away from the contestants.

At some point during the series’ life—someone with a better memory than me might recall when—the production got more savvy about the tally process, and basically started editing the episode in real time on location. They decide which votes will be shown on screen, and then Probst shows those votes first, which adds additional suspense.

Arranging votes takes some time, and the tribe sits and waits for Probst to return. My recollection from being on location in Gabon, Brazil, and Samoa was that this process could take five or even 15 minutes. It’s just one of the many things that make typical Tribal Councils last longer than an actual 42- or 43-minute episode of Survivor.

The vote-arranging even accounts for potential twists. A few years ago, Probst told EW, “I stack the votes prepared for them to play the idol, as that is the assumption I always make. If they play the idol, I read the votes as read and we usually eliminate their votes off the top so we can delay the reveal of who is going home. If they don’t play the idol, then I have to pull the votes out in an order different from the way they are stacked.”

Probst admitted that this is for drama: “We just want to present them in the most dramatic fashion, so we pay close attention and try to think through every scenario.”

Of course, that’s not a scandalous admission; it’s just one of those ways that Survivor pays attention to detail and creates a better television experience as a result.

Why are you so negative about Survivor?

Curious—why do you continue to write about a show you don’t seem to enjoy? I read other blogs about survivor and other reality shows but yours always seems to be coming from the view of someone who doesn’t really like it. Not saying you should like it, but doesn’t make me want to read it when it’s always negative. are there any shows you like and write positive things about? Maybe it’s just this one. —Anonymous

This is a fair question, and questions and comments like these have come up more than a few times in the comments of Survivor recaps this season.

It’s also the kind of question that can make me defensive, so I’ll do my best to put my shields down.

I know objectively that it is easier for me to identify and judge something that isn’t working for me. I also know objectively that the archives here are full of effusive praise and celebration for Survivor and other reality shows, and just scanning the list of recent stories, it is not an endless parade of dark clouds.

If you think my writing on reality blurred is an endless abyss of negativity, then you’re either not reading everything I publish, or everything I write is endlessly negative and you’re throwing yourself into an abyss for some reason, and that worries me.

The question above arrived in my inbox after I wrote about last week’s episode of Survivor, and thus felt particularly odd because last week’s episode was an entertainment high point for me this season, and I thought I pretty much celebrated it in my recap. Sure, I pointed out some things that had awkward optics, and also how it would have been preferable for events to go in a different direction, but I thoroughly enjoyed the central narrative arc of the episode.

Isn’t this what we do with Survivor? Discuss and explore possibilities, and debate consequences and outcomes?

I’m left to unpack the question a little more, and I get stuck on this sentence: “Not saying you should like it, but doesn’t make me want to read it when it’s always negative.”

So, what I hear you say there is that it’s okay for me to not like part of Survivor, but you don’t want to read something if I don’t like it.

And so this question, and this kind of feedback, seems to come down to this: I only want to read what you write if we agree.

Dear reader, if you’re reading my writing just to have your own feelings about the episode validated, I will apologize now for failing you. I can’t even validate my own feelings, so I sure don’t want to be responsible for yours.

What I can promise to do is respond honestly, and with the most informed opinions possible. Sometimes I change my mind. Sometimes I’m just wrong. Sometimes the discussions that follow help me see angles I didn’t consider. Sometimes I look back and can’t quite remember why I wrote something. That’s why I like the dialogue that takes places after I write. Maybe we’re valuing different things. Maybe things that have started to grate on me are things you’ve been able to tune out. Maybe we just disagree.

But I promise I don’t just turn on the TV to hate on anything. That’d be dreadful!

Still, I can see how it might seem like that. I’m skeptical. I ask questions. I react to decisions I find appalling. I have high standards for my entertainment. I strongly believe that television has an impact on our culture and on us, and definitely think its creators should be held accountable by viewers, including by members of the media (hi!). That’s especially true of entertainment that reaches so many people, and Survivor is still a top-10 show.

I had a blast writing Amazing Race recaps for years, and then the show grew stale for me, so I stopped, because I didn’t think I had anything to add. Perhaps that day will come for Survivor.

So why am I sometimes negative when I’m watching and often enjoying? My recaps aren’t transcripts of episodes; they’re the things that stand out to me, which may be a change or decision I don’t like—or it may be strategy that backfires in a spectacularly fun way. I’m writing what I’d talk to my friends about in my living room or at work the next day, and I appreciate all those who join the conversation with me.