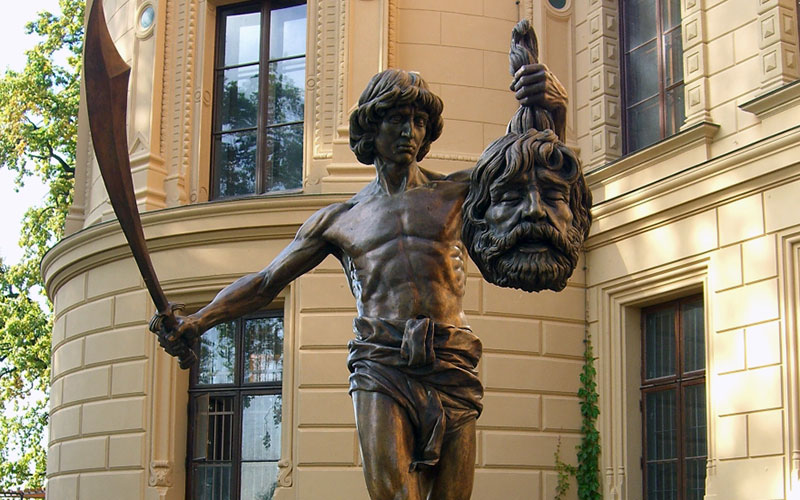 A David with the head of Goliath statue in the gardens of Schwerin Castle in northern Germany. (Photo by Ruchhöft-Plau)

Survivor season 37 has wrapped production, and will be officially announced or teased at the end of the Survivor Ghost Island reunion tonight.

As usual, though, many details have already become public, thanks to spoilers, cast members, and others, so here’s what we know so far about Survivor David vs. Goliath.

The theme is clear from the title, Survivor David vs. Goliath, which will once again feature two tribes arbitrarily divided by arbitrary characteristics. This time, those characteristics are embodied in two characters from the Bible.

According to the Oxford Dictionary, David and Goliath is now commonly “used to describe a situation in which a small or weak person or organization tries to defeat another much larger or stronger opponent.”

So yes, Survivor will go from a season where it largely ignored many of its female cast members to having an entire season defined by two archetypes of masculinity and degrees of physical strength.

The theme was identified in late April by Reddit user anthonyd46, who said it was two tribes separated by occupation: “David: Common people” and “Goliath: People on top of their respective fields like ceos surgeons etc.”

Inside Survivor’s Martin Holmes later wrote that he confirmed the theme that “with multiple sources.”

The Survivor David vs. Goliath cast

There will be 20 cast members on season 37, and those identified so far are new to Survivor—though one is not new to CBS reality TV shows.

TMZ revealed three of them in stories published during March and April, including one person, Alec Merlino, who TMZ says was punished by the show for posting a selfie revealing that he and Kara Kay were on the show.

In May, Inside Survivor’s Martin Holmes published a list of 14 of the 20 cast members (including the three identified by TMZ) in a post that gave credit to @1elevenpaul for helping to identify them.

True Dork Times has a calendar with estimated filming dates.

Both seasons 37 and 38 are staying in Fiji, which means that, after they air, we’ll have had six consecutive seasons and three years in the same location.

Here’s why showrunner Jeff Probst wants the show to stay in Fiji.

In EW’s extended interview with Jeff Probst and Mark Burnett, Burnett says staying in Fiji “is one of the best productions and creative decisions you can imagine,” and adds,

“Jeff is Survivor and that’s the reason the show does so well, and it was Jeff’s choice to want to have one location. I probably look back and wonder: Was it the right move to have changed country names every year? Maybe it wasn’t. Maybe it’s what Jeff said—we had to go A, B, C, D, E and F versus jump A to X or something like that, but having these themes is much more descriptive and a better attractor to the mass audience I think then just naming a country.”

In the preview that aired during Survivor Ghost Island reunion, Jeff Probst introduced the season as “the story of the underdog versus the favorite,” and explained the criteria the show used to divide the cast: