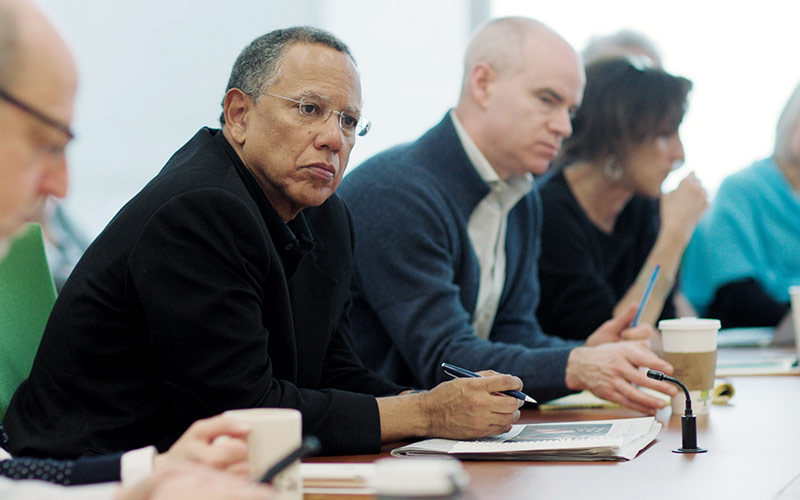 In the fourth and final episode of Showtime’s new series The Fourth Estate, which follows journalists and editors at the New York Times, we see reporter Jeremy Peters at home. He gets out a box of Multi-Grain Cheerios, makes coffee, watches the news, talks about his week, and then he kisses a man—his boyfriend? husband?—goodbye.

Then he heads to Alabama to report on Senate candidate Roy Moore. A few moments later in TV time, he’s outside, sitting at a picnic table, interviewing Moore’s strategist, who’s wearing a red MAGA hat.

“If we don’t get back to a belief in god, and again that’s the Christian god, that made this nation great, then it’s going to continue to fall apart,” Dean Young says. “We got gay people pretending like they’re married.” Peters asks: “Why do you keep saying pretending? Its the law of the land, isn’t it?” Young replies: “That doesn’t matter.”

Moments later, Young rails on the “fake news,” but makes an exception for the journalist from the New York Times who’s sitting in front of him: “I’m not saying you.”

The same thing happens with Steve Bannon, who greets Peters casually—”Good to see you, brother”—and answers questions freely. Backstage at a rally, Bannon gives the journalist some detailed information, citing a source who’s name is bleeped.

Then Bannon gets on stage to introduce Roy Moore, and starts trashing the fake news and New York Times.

In both of these interactions, both the access and the contrast are extraordinary, illustrating how journalism gets made—and also how, as Jeremy Peters says in an interview with the producers, journalists at the Times are “a useful punching bag.”

That punching bag opened itself up to more scrutiny by saying yes to having cameras capture their lives in the newsroom and at home.

Truly cinema verite reality series are few and far between, in no small part because it takes time and money to film for extended periods of time and capture life as it happens. So a glimpse inside a workplace and institution is a welcome addition to reality television.

Given that extraordinary access, The Fourth Estate’s director Liz Garbus has produced a series that is often quite intimate, but so close that it doesn’t take much of a step back to look at the bigger picture. And it’s also distant from the process of actually producing the news.

That’s frustrating, because when the show breaks out of that to show stories coming to life in real time, it’s compelling:

There’s also footage that illustrates change in the newspaper business, such as frequent recording sessions for the Times’ popular podcast The Daily, and images of constant financial struggle, from including a walkout by editors upset with management’s decisions. There are moments of levity, including media columnist Jim Rutenberg riding an elevator with paint on his suit, because the Times’ offices are being condensed to save money and he’s literally been affected by the construction.

These are insightful glimpses at what it’s like to do the work of journalism, which receives a lot of criticism, even by those who don’t understand the process.

The Fourth Estate focuses on Trump

The show has made the decision to focus on the paper’s coverage of Donald Trump’s administration, which Garbus readily admits: “I wanted to make a film about covering the Trump presidency,” she told Vogue.

Covering the reporting about a presidential administration might be difficult. Reporters seem glued to their phones and screens, which isn’t compelling television, and if they have meetings or conversations with trusted, confidential sources, that’s too sensitive to film—though the show does get around that by bleeping sensitive information.

After the first attempt to repeal the Affordable Care Act fails, Maggie Haberman learns that “Trump’s about to call me,” as she tells her colleagues, who gather around her desk and give her suggestions. Then she answers her phone: “Mr. President, how are you?”

At one point, Trump says, “This is off the record,” and there’s just a sustained bleep over whatever he’s saying.

What’s particularly fascinating—besides how genial and accessible the president is to the paper he publicly says he hates—is how Trump tells her he doesn’t blame Speaker of the House Paul Ryan. Then someone in the room with Trump texts another reporter to say that it’s Ryan’s fault, and the journalists can use that fact in their story.

The Fourth Estate stops there, though, and doesn’t engage with Haberman’s closeness to the president, or the way she just repeats what he says in her story.

Worse, in focusing on the paper’s coverage of Trump, The Fourth Estate misses some clear opportunities. (Gee, does that sound familiar?)

During Liz Garbus’ 16 months at the New York Times, which started on Donald Trump’s inauguration day last year, the Times did break multiple stories about the Trump administration. But it also revealed that Fox News had paid millions to women who accused Bill O’Reilly of harassment, leading to his exit, and first reported on accusations of sexual harassment and assault by Harvey Weinstein, which created an entire cultural shift.

The show flits past both of those stories. Reporter Emily Steel suddenly appears for a brief scene, a flurry of work trying to talk to sources for the Bill O’Reilly story that later won her a Pulitzer Prize, and then evaporates again.

Megan Twohey and Jodi Kantor, who told the stories about Harvey Weinstein no one else could or would, only appear on screen for a moment.

Besides missing those stories being reported, the series doesn’t engage in any meaningful way with external criticism. There are some discussions, from Mike Shapiro talking about why he doesn’t challenge the president when he gets an exclusive interview in Palm Beach, to editors and reporters discussing how to use the word “lie.” (That’s a debate which just flared up again over the weekend on Twitter.)

There’s no discussion of newsroom diversity, and nearly everyone the show follows is white, except for executive editor Dean Baquet and reporter Yamiche Alcindor, who’s in one episode and now doesn’t work for the Times any more.

Implicitly, by its editing and focus on the flurry of day-to-day life, The Fourth Estate suggests that the Times’ reporters are too busy doing their work to care about lightweight criticism from the public. I don’t think that’s true, but that’s the suggestion when the show has critical tweets pop up and fly by faster than it’s possible to read them.

The show also makes the case that other media is relying on The Times’ reporting, by repeatedly giving us audio and video of other media outlets reporting on whatever story The New York Times just broke.

The New York Times is challenged and criticized from the left and right because of the decisions it makes, from headlines to individual words. That criticism is often fair, and it’s also often unhinged lunacy conspiracy theories masquerading as criticism.

The Fourth Estate combines these glimpses with a soundtrack that the closed-captioning describes as “tense music,” and montages of people scrambling, editing over people’s shoulders, looking at the clock, and publishing to the website.

The show hopes that’s enough to convince us. Of what, though? That journalists work hard? That they’re debating even the tiniest of things? There isn’t enough sustained attention on any one story to make that the focus, so what is the focus? There’s no arc, no beginning, middle, and end—perhaps because that’s not how life really is.

Watching these journalists’ lives, I was frequently glad to be a fly on the wall, at least when The Fourth Estate would let me stay long enough to see something happen.