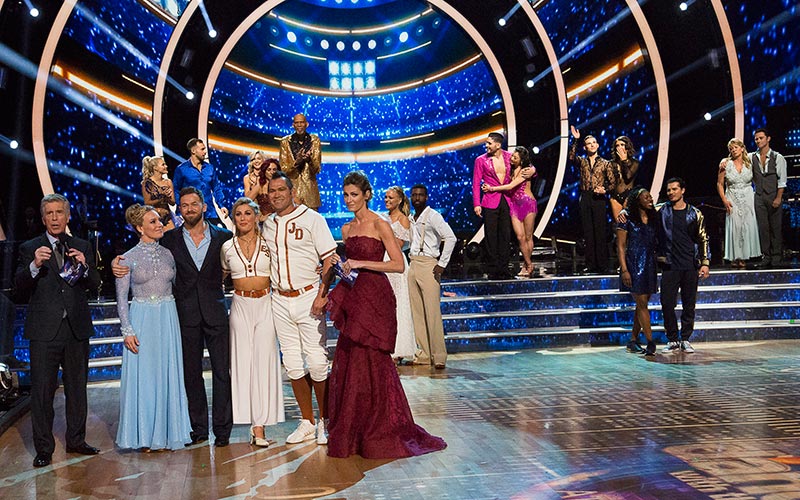 Dancing with the Stars: Athletes hosts Tom Bergeron and Erin Andrews with the first two eliminated contestants and their partners. (Photo by Kelsey McNeal/ABC)

Over the past 10 years, the size of a full season of scripted TV shows has been shrinking. The standard 22-episode season gave way to a model that was proven by prestige cable dramas: the 13-episode season. Now, some shows have even shorter runs: 13, or 10—even eight or six episodes per season.

Longer seasons haven’t evaporated, and they work for some shows—especially those that have one-off episodes and don’t tell serialized stories. But many serialized shows suffered under that model, stretching out a story long after it should have ended, or filling time with pointless diversions (hello, Lost, I’m still made at you).

That’s what competition reality shows also did, stretching out like they were hot bubble gum.

At first, longer seasons were quite welcome. When these shows were new and special, there was a sense of discovery that was replaced by familiarity, and both are well-served by longer seasons. Why not add additional American Idol audition episodes if viewers craved more? Use the footage that might have otherwise been cut for time.

There was also a business logic to that strategy. With a cheap production getting high ratings, of course networks were going to fill all the timeslots and then empty the wheelbarrows full of cash.

American Idol aired 552 episodes in 15 seasons on Fox, averaging just under 37 episodes per season—many of them had more than 40 episodes. Eventually, though, the magic faded, and we were left with things like an agonizing hour of fluff to get to 30 seconds of results. It was too much.

American Idol, the ABC version, is almost unrecognizable from the Fox version, and the time it’s occupying is one of the major reasons. Its more intimate stage has pulled in the walls and collapsed the empty space, and that’s a good metaphor for what’s happened to the season and its episodes.

The show started in March and will end less than three months later. We’re going from the top 10 to a winner in just four episodes. There are no results shows now (though there will be one for the finale), just performances and eliminations. Last week, American Idol dropped three contestants after its first live vote—wow. Something that would’ve taken three weeks was over in just a few minutes.

Every stage of Idol’s competition has left me wanting more, and that’s so much better than being bored.

Cutting down the bloat has its drawbacks

Not every competition stretched out its seasons to impossible lengths.

But even among the shorter shows, there’s a lot of bloat. Even after Dancing with the Stars dumped its results shows five years ago, it still had plenty of filler, and episodes could feel overly long.

This season, which has an all-athelete cast, is shorter: just four weeks. Once ABC decided to bring American Idol back, it had to make room, burning through Shark Tank and crunching back Dancing with the Stars.

But the result is working very well so far—though I’ve only seen one episode, it is one-quarter of the season. The most remarkable part of last week’s premiere was the eliminations, during which Tom Bergeron quickly announced the bottom three and then revealed who was going home.

That speed and brevity shocked me. I was ready with the remote control but Tom gave the actual results before I could even start fast forwarding. Three couples identified at risk, two eliminated, done.

What ABC has given us this spring with Idol and DWTS is a completely new way of watching two major, legacy reality shows. They now have compact, efficient seasons. ABC is blazing new ground here, and I hope others follow, because it’s working quite well. (Editing to add: Earlier this spring, a veteran series, CBS’ Celebrity Big Brother, and a new series, Fox’s The Four, had similarly short, compact runs. It was especially refreshing to see Big Brother’s game play out over just a few weeks.)

Sure, shorter seasons aren’t perfect. They give less time for contestants to find their footing or earn an audience; one bad performance and bye bye. Ada Vox was saved by the judges two weeks ago and then sent home last week. It’s not a surprise that someone without a voting fanbase wouldn’t be able to develop one in just one week.

This also means that contestants who’ve received the best edits or the most attention from the producers might have an edge up. Or, to look at it from the other side, it may be more difficult for producers to create season-long arcs for all of the contestants. I haven’t watched every Idol episode, but my sense from the early part of the season was that people came and went pretty quickly, and more than a few of my favorites from the first half disappeared and were replaced by people I didn’t really know.

That’s not ideal, but neither is having a show just filling time because it can. There is too much great television now for that make sense any more. The cliche is true in this case: Less is more.

The podcast app I use, Overcast, has a feature called “smart speed” that eliminates longer pauses. The app tells me that having that feature turned on has saved me hours of time. That’s nothing I’ve ever noticed. Perhaps I’ve missed out on a few artful silences in cinematic podcasts, but mostly removing the emptiness has improved my life.

That’s what American Idol and Dancing with the Stars: Athletes have done. Hopefully their example will mark the start of a new era of efficient, brief competitions. Now it’s your turn, The Voice, America’s Got Talent, Big Brother, and other bloated shows.