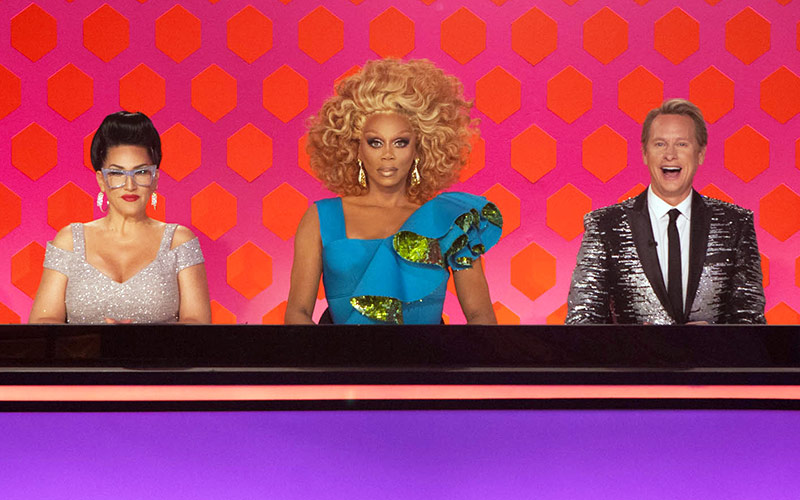 Long before queens can face the RuPaul's Drag Race judges (Michelle Visage, RuPaul, and Carson Kressley), they have to sign a 51-page contract. (Photo by VH1)

Like all reality competitions, RuPaul’s Drag Race requires its participants to agree to rules and sign legal documents governing their participation in the series. Although the drag queen competition series is now in its 10th season, and though contractual obligations and rules have been mentioned even on the show, I have yet to see the contract’s contents discussed in-depth—even though it was available publicly online.

Compare the Drag Race contract to the Survivor cast contract or the Big Brother houseguest contract, and you’ll find a lot of similarities. Much of the language is standard and makes sense, allowing the production to use what’s filmed on television and in advertising, and making perhaps obvious things explicitly clear, including that there is “no expectation of privacy.” But there are also many clauses that are very specific to Drag Race and life as a drag queen.

Below is the contract the contestants had to sign for RuPaul’s Drag Race season eight, which is the season Bob the Drag Queen won and the last season to be broadcast on Logo.

During casting for season eight, the process required applicants to sign this contract before they even filled out the application or uploaded a video. As such, the document below was publicly available on World of Wonder’s website, and that is where I obtained it.

The current contract may be different, though even though the show changed from Logo to VH1, its parent company (Viacom Media Networks) nor production company (World of Wonder) have not changed. The process, however, is different: potential contestants for season 11 have to answer dozens of questions first, ranging from “How did you get your drag name?” to “Who would you do on Snatch Game?” before they’re sent the “Participant Agreement,” the document you see below.

So what do people who applied to the show agree to? The collection of legal documents is 51 pages long, and includes background check and medical release forms, plus basic rules.

Highlights from the contract, which follows and is annotated to highlight these points and others: