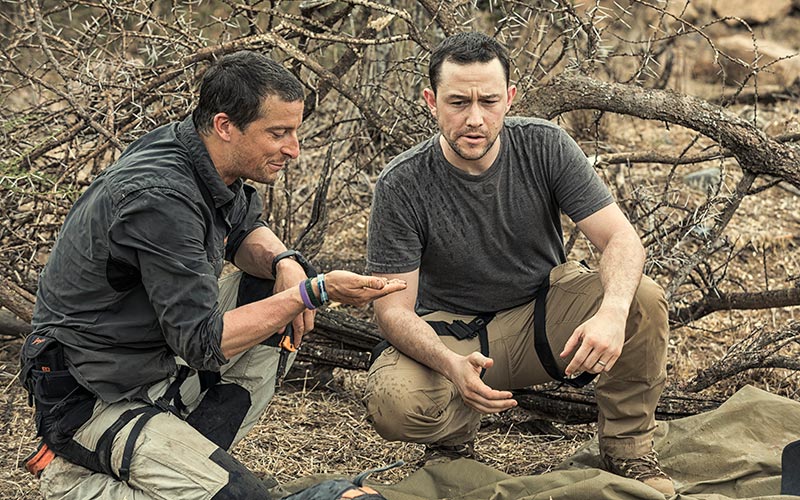 I’ve loved the Running Wild episodes that I’ve watched previously—Nick Jonas swam through icy water despite his diabetes and struggles to get circulation in his feet, and Julianne Hough encountered elephants, cheetahs and a snake.

How safe are the contestants? Do they know what their up for before showing up to film? And is their journey as spontaneous as it seems on TV? And are they alone or is a crew with them? Tell me more! —Bradley

I think the best word to describe NBC’s Running Wild with Bear Grylls is “well-produced.” It’s like a Survivor challenge: the crew has prepared and set things up, but when the contestants show up to actually play the game, there are still variables that make it entertaining.

On Running Wild, the celebrities do not know what they’re doing—though now that the show is in its fourth season, of course they know the show and can imagine the possibilities. That element of surprise often adds to their trepidation, and adds drama.

In an interview with reporters, Tom Arnold, who appeared on season one, said, “Now that I know what it was, if they’d ever told me everything in advance, I would have never in a million years have done it because I would have been scared.”

Arnold also said, “I kept comparing this to let’s say, True Lies or one of the other many movies I’ve done. You did stunts, but you were safe because you practiced, and you were hooked up to all kinds of cables. It looked scary, but this actually was scary.”

That actually seems to be the best explanation for the show I’ve read: It’s safe but scary, like bungee jumping. While the celebrities haven’t practiced, Bear knows what he’s doing, and so does the show’s crew.

This is an NBC television show featuring A-list actors. While few things in life are safe—after all, walking across the street can be dangerous—you can bet no one is doing this, not the network or their insurance company or the celebrity’s representatives, without a lot of assurances that everything is as safe as possible.

However, here’s what Bear Grylls said in a season-one call with reporters:

“It’s not laid out at all and there isn’t a production, which is, for me, how it makes this so fun. We have two camera guys, two sound guys and we have a story producer, who’s making sure that we’re kind of watching what I say or what the guest says so it kind of makes a complete package and makes sense. But beyond that, we’re super a small crew. We scout the area from the air over a few days before so we have good idea of the route and I have a good idea of what we want to do, Let’s get across the river. Let’s get across this river, we try and get out one of these rock faces here and somewhere around there will be a good place to camp. That’s going to be great extraction point because we get a helicopter in there and we’ll start off the journey on this high peak there. And beyond that, we just get in to it and do it. And that’s what I think all of these guests have loved because they all come from a world where everything is rehearsed and pre-planned. And all of them have loved the vibe that we’re just winging and we’re doing it and some of the stuff works and some of it doesn’t.”

Perhaps things have changed since season one in 2014. On screen, though, the show hasn’t changed much, so let’s break down what he says here.

I struggle with understanding how “not laid out at all” and “we have a good idea of the route” are compatible ideas. At the very least, they know where they’re going, how they’re going to get there, and how long it’s going to take, and that’s a pre-planned route.

And of course there is: It’s a TV show that films an episode in two days in a remote location. Of course there’s planning and production. Let’s not insult the people who do all of the work by pretending there’s no work involved.

One of the reasons I enjoy watching Running Wild with Bear Grylls—beyond seeing celebrities challenge themselves—is that I like trying to spot subtle moments when the show reveals how non-spontaneous it is.

On Monday’s season four premiere with Joseph Gordon-Levitt, Bear and Joseph get on a helicopter and fly around, allegedly looking for a place to land. Bear spots a lake and says, “We might even be able to use the water. That’s going to be our best bet for getting down.” Yet there was already a camera crew on the ground filming as the helicopter landed.

Bear is particularly good at acting as if he’s making a spontaneous choice or feigning surprise, especially when they stumble upon, say, a dead animal located on their route.

How convenient that so many episodes they stumble upon dead animals! The turkey leg snack bars at Disney World are harder to find than dead animals on this show. Though some of the animals’ locations are highly suspicious, I’m not suggesting the production planted them, like the dead water buffalo and crocodile on Monday’s episode.

Update, Nov. 5, 2019: Bear admitted to me that Running Wild’s dead animals are usually staged by the production, and have trackers so he can find them.

But I’m also not convinced that Bear or the production are truly just stumbling across these things in every single episode, and always on day one, and always to set up a scene where the celebrity has to eat something gross.

Bear tries hard to sell everything as if it’s new and surprising to him. Still, Bear’s performance can often be comical, like at the end of Monday’s episode when Bear and Joseph Gordon-Levitt and a camera crew were standing on top of a mountain and being filmed by a helicopter, and Bear signaled another helicopter with a mirror to “make sure we’re visible.”

The show tends to admit that it has pre-planned elements when it can’t really avoid how obvious something looks, such as when Bear and the celebrity show up and there’s safety equipment in place in the middle of the wilderness. (That is not “winging it.”)

For example, on Monday’s premiere, they arrive at a mountain and Bear tells a camera, “I pre-placed a ladder to get to the top.”

Climbing the rope ladder still looked terrifying, especially for someone with a fear of heights like Joseph Gordon-Levitt. That’s why the show is watchable and entertaining, because there’s a famous person doing things way outside of their comfort zone.

And the editing, the music, and very real fear combine to make this dramatic, while the cinematographers do a  great job of making it seem like Bear and the celebrity are alone, even when they’re filming from perches alongside treacherous routes.

Yet Bear’s claim in that season-one interview that “there isn’t a production” is implausible. The photograph above, and many others, were taken on location by an NBC photographer for the media to use. And the show’s credits for the season four premiere listed these crew members:

And those are just the crew members that sounded to me like they’d definitely be on location. There were other producers and crew members who may also have been there.

None of this production makes the show fake, or makes it less watchable. In fact, it makes it better television, because it’s so well-produced.

Recommended for you: Bear Grylls on staging dead animals, planning routes, and what changed for Running Wild with Bear Grylls season 5