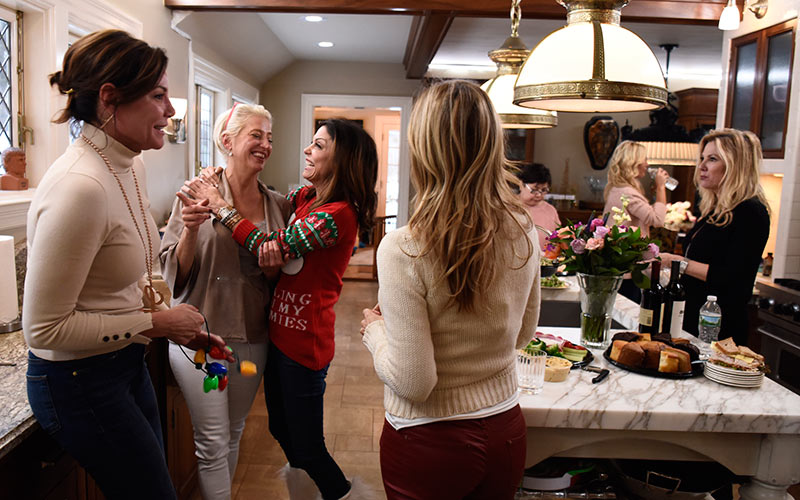 The Real Housewives of New York City began their annual excursion to the Berkshires on last night’s episode, and all is well with the world. I want to live in that house and drink wine while they pick fights with each other, but since I can’t do that, I’m glad to be able to experience it on TV once or twice a year.

It’s Christmas time, so the perfect occasion for a murder mystery dinner. Dorinda/the producers planned it, but I think this may have been the producers’ doing, because Dorinda was so over it that about three milliseconds after the second actor faked his death, Dorinda “solved” the case to get it over with.

And those poor actors! The first one stumbled into the cocktail party to perform is death scene and no one noticed, because why would they focus on anyone but themselves? And once they did, Ramona climbed on top of him and started giving him chest compressions, which may not be advisable for someone who is actually breathing just fine. And then LuAnn gave him mouth-to-mouth.

The butler character left the room but we got to hear what he was telling whoever was catering the dinner: “Drinks please. They’re yelling,” he said in the most over-it voice imaginable.

How wonderful is this cast that they totally overshadowed two actors pretending to die, and then shut down the entire , just so they could argue while in period dress?

That cleared the way for the multi-episode fight—on screen, the RHONY trips tend to last longer than LuAnn’s marriage to Tom. This one is between Bethenny and Carole and apparently about what method of communication Bethenny used to ask Adam to do charity work, and on what day and time, exactly.

As usual, it’s a petty, ridiculous argument, stoked over several episodes of the cast members blowing on whatever embers they can find.

I love this cast not just because they have fights over the pettiest things, but because they bounce right into the next conflict as effortlessly as a rubber ball dropped onto a trampoline, and let go of things faster than Sonja gets rid of pets.

Real life does show up—this season has included the horror of people still suffering in Puerto Rico, drinking problems, infidelity—and reminds us that these are real human beings. But for the most part, they keep it light and fun, and do what they need to do to be invited back next season.

The editing this season has been particularly clever. A flashback to LuAnn falling into the bushes drunk on a previous vacation was labeled “1919,” to keep with the time period of the murder mystery.

And there’s a lot of subtle but sharp contrast. Earlier in the season, the editors cut much more deeply, alternating between Bethenny’s charity mission to Puerto Rico and absolutely trivial behavior from the other women in New York.

But it’s mostly fun, too, like the episode when Ramona was shopping while talking on the phone, and picked up a knife in a plastic package, which she began stroking as she talked about one of the other women and said, “I’ll have patience for her.”

I don’t know if I have the patience to wait until next week for part two. More trips! More Berkshires!