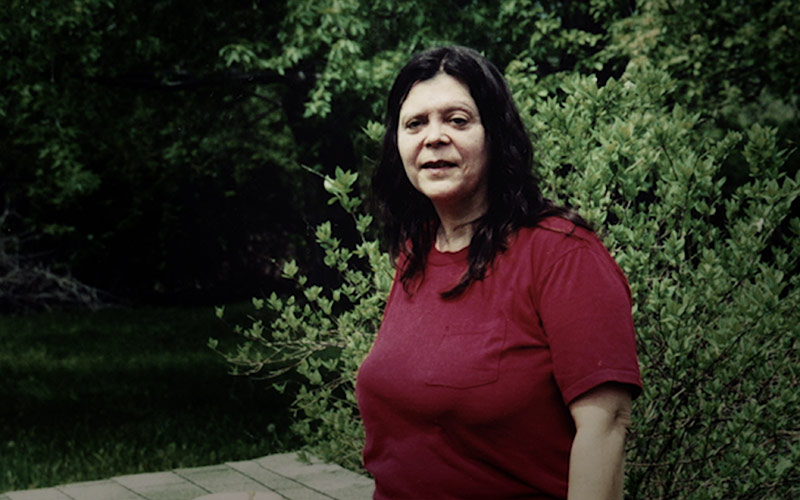 At the start of Netflix’s Evil Genius, a four-part series about the pizza delivery man who robbed a bank and then was killed by a collar bomb, we’re introduced to two people: a shadowy, mysterious person at the center of the story, and Marjorie Diehl-Armstrong.

Marjorie Diehl-Armstrong, we’re told, is both smart and mentally ill, and because she delivers the line “I am not some evil genius,” it is very clear that we are expected to think that she is an evil genius, which is important because otherwise the title of the series just doesn’t work.

The mysterious person is a man who’s narrating her story, and he appears briefly on camera, walking into a garage and pulling down a box full of letters. These are letters Marjorie wrote him from prison, and he leafs through them before disappearing for most of two episodes except to pop up occasionally as narrator. He seems invested, but why?

The mystery of who he is, and just what he has to do with this case, grows and grows. Who is talking? Why does he care? Why isn’t the show telling us anything about the person who hoards letters from a person in prison and is now narrating a Netflix series? Who is Trey Borzillieri?

Trey is credited as co-director, after director and writer Barbara Schroeder. It turns out he’s a person who became obsessed with the collar bomb case and did the normal thing that people do: moved to the city where it took place and developed a relationship with an imprisoned woman who may have been the bombing’s mastermind, and did favors for her and recorded all their phone calls.

Evil Genius finally reveals all this, and that’s where it lost me and stopped being Important and Shocking because there’s a moment that almost exactly mirrors a line in A Very Fatal Murder, The Onion’s wonderful satire of a true-crime podcast. (I’m not the only one who noticed this.) Yet Evil Genius does not have any self-awareness about Trey’s involvement with the case.

Actually, it felt to me like Evil Genius wanted to ignore its origin for as long as possible. The series that resulted from this obsession and, later, collaboration with Schroeder (the director of the 2009 documentary Tallhotblond) feels like an adult came in and made something presentable out of a child’s scribblings—or in this case, fumbling attempts to play detective or Dateline reporter while talking to an imprisoned woman.

A strong start followed by a weak ending

The first two episodes of Evil Genius are competently produced and compelling, smartly starting the story with one person, and then adding another, and connecting the dots between them. The evidence, including a complicated scavenger hunt, builds the mystery.

By episode three, though, the introduction-explanation-connection accelerates to the point where it didn’t exactly lose me, but it lost my interest by not retaining its focus on individuals. I didn’t want Evil Genius to be longer than its four episodes—its brevity is certainly a strength—but too many people are introduced too quickly, and the argument the show is trying to make loses its momentum and strength.

The story at the center of Evil Genius was the subject of an excellent 2010 Wired article, which I read after watching the series. If this series had been the TV version of that article, it would have been exceptional; instead, it tries too hard to make headlines by replacing nuance and exploration with shock and awe—or at least, what it thinks will be shocking.

A discussion of episode four follows in the next two paragraphs: In episode four, Evil Genius brings in a person for its “stunning confession,” to quote one headline, though I was not stunned. (The Jinx’s audio of a man apparently confessing to murder may have made it difficult for me to find anything less than that to be stunning.)

The admission that this person was involved in the conspiracy is presented as evidence that Brian Wells should be completely exonerated, yet the final episode ignores some of the details the first episode brings up. If Brian Wells was really innocent and a reluctant participant, why did he take a lollypop from the bank teller and casually suck on it while exiting the bank, twirling his loaded cane gun? Why did he still blame fictitious black men, the cover story he was told to use, instead of just telling police who did strapped a bomb to him?

There may be answers to these questions, and to other questions about what the show ignores. There are threads that it touches on but skims by: Marjorie’s childhood and her wealth, the way law enforcement agencies don’t talk to each other, even hoarding disorder’s connection to these crimes. But Evil Genius doesn’t have either the time or the desire to explore.

A focus on the ‘evil genius’

Marjorie Diehl-Armstrong died last year. In the last recording we hear of her conversations with Trey, she threatens to sue him if his film (this series) makes the claims that it ends up making.

Also, dead people can’t sue for defamation, and filmmakers can’t be sued for defaming someone who’s dead. And dead people can’t give us more details, so Trey’s insistence that she was the evil genius and knows all the answers is unprovable and feels like an easy way out for the series: she knew everything, but she’s dead, oh well!

Last year’s spectacular Netflix series The Keepers was pitched as a murder mystery but was actually about the survivors of abuse, and in that way, avoided becoming a black hole of speculation and amateur sleuthing. Evil Genius does not keep the same focus on the person it claims is a victim.

The series starts and ends at the same place, with Brian Wells handcuffed, sitting in a parking lot, police pointing guns at him, collar bomb strapped to his chest.When it returns to him at the end, it’s to show that footage again, but this time, to let viewers watch him die. The actual explosion on his chest is blurred out, but that doesn’t protect us from much, as we see him fly violently backward as cops duck behind a car.

This is yet another unusual choice for a series full of them. The start of the series shows us the same footage, but cuts away at the moment of the explosion, showing only shrapnel bouncing on the pavement. Evil Genius seems to want us to feel for him, so it returns to his death to shows a hole being ripped in his chest as a way to solidify its case that he was a completely innocent victim. That’s easier than making a fuller case or answering the questions the show itself raises.

And of course, there’s the question that the show doesn’t want to answer: Who is Trey Borzillieri? There’s something truly fascinating about a person who spends a decade and a half on a case, taking it upon themselves to investigate and interview people. He forms such an intimate relationship Marjorie—a woman who admits her mental illness and admits to killing two of her partners—that she says, in recorded phone calls, that she loves him. She also threatens him.

Evil Genius doesn’t want to get into the sticky mess of its origin story, or the implicit—and quite scary—argument it’s making about how a random person with a tape recorder can do better investigative work than the FBI and local law enforcement combined.

But it is content putting that story out into the world as definitive fact, leaving viewers with a sense that they know everything and thus, just by virtue of watching four hours of Netflix, are smarter than the conspirators and law enforcement combined. Genius.