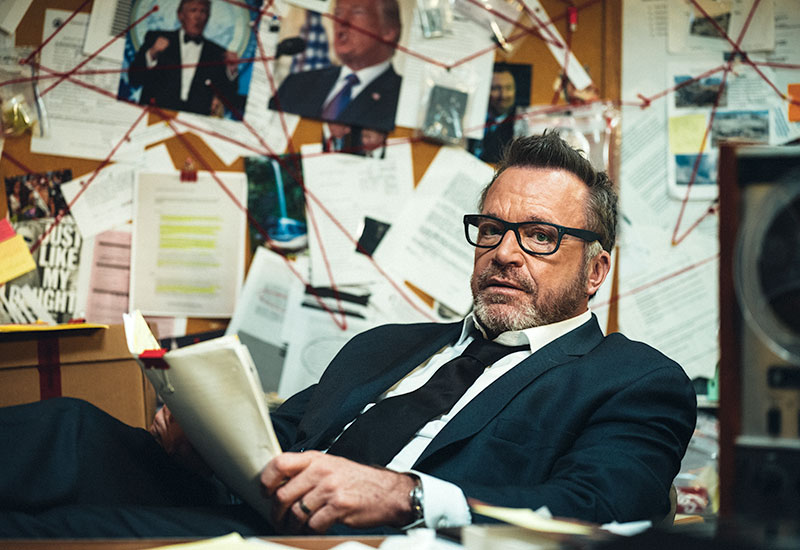 Tom Arnold, who will star in The Hunt for the Trump Tapes. (Photo by Shane McCauley/Viceland)

During the presidential campaign, after the Access Hollywood tape became public, The Apprentice producer Bill Pruitt tweeted, “I assure you: when it comes to the #trumptapes there are far worse.” He meant footage from The Apprentice that’s far worse than now-President, then Apprentice boss Donald Trump saying, “When you’re a star, they let you do it. You can do anything. Grab ’em by the pussy.”

Mark Burnett insisted back in 2016 that he “does not have the ability nor the right to release footage or other material from The Apprentice” and blamed “Various contractual and legal requirements.”

But now, a new reality series is going to try to find those tapes.

It’s called The Hunt for the Trump Tapes with Tom Arnold, and follows the actor “as he uses his network of connections to search for the truth behind these elusive recordings” and “will look into the network of powerful people and companies who have kept these revelatory and potentially damaging recordings under lock-and-key,” according to a press release.

Viceland, which will air the series later this year, insists that the show is “serious in its intent” but “is All the President’s Men by way of Curb Your Enthusiasm.”

However, there was already a “desperate, year-long hunt to find” the tapes, as Vanity Fair reported in an in-depth feature story, one that involved a presidential campaign and major media organizations.

None of them were able to find or uncover anything, which may make this new reality series the Viceland equivalent of Finding Bigfoot.

Viceland has set up a tipline with a postal address and other means of contact, and while they offer SFTP, they require a tipster to e-mail them first, and e-mail has all the security of a postcard. (News organizations offer various secure methods of contacting them.)

Also: What are the chances someone with access to damning footage—if it even exists—would have withheld it during the campaign but will now send it to a cable network’s semi-serious show?