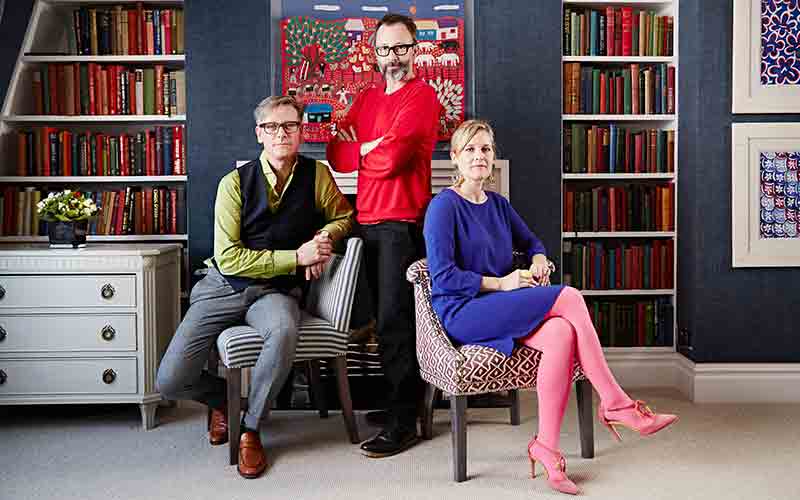 What if Trading Spaces replaced its professional interior designers with amateurs? And what if it asked them to redecorate rooms not in suburban ticky-tacky boxes, but in buildings with rich histories and notable architectural styles?

The result sounds like a potential mess, especially when you consider that Trading Spaces’ professional interior designers have glued hay to walls and nailed furniture to ceilings.

But that—amateurs redesigning rooms, not hay-gluing—is essentially the premise of The Great Interior Design Challenge, a competition from the UK that debuted in 2014. It’s aired four seasons; the third season is now on Netflix. As someone who misses design competitions such as Design Star and Top Design and who loves GBBO, I highly recommend it as the perfect mashup of the two.

While it’s certainly not as charmingly twee as The Great British Bake-Off, it’s a delightful watch, and such a wonderfully evolved version of the design competition. It’s a big cushioned chair of a design competition: soft enough to sink comfortably into for an afternoon or evening, yet structured to provide proper support.

The Great Interior Design Challenge begins with just four amateur designers, who each redesign one room in a historic building—usually ones that have been converted into apartments or homes. One of the designers is eliminated at the end of the episode, and the second and third episodes continue that way until one designer remains to go on to the quarter final. Then the show brings in four brand-new designers, and repeats that cycle.

Instead of a deluge of 16 designers who get surface-level introductions, we get to know four at a time. It’s a brilliant way of structuring a competition; everyone and their work gets focus. The show becomes four mini-seasons, with the winners showing up at the end to compete against each other.

While they are designing real people’s homes, the reveal of the new spaces at the end of each episode is surprisingly muted. Surprising and/or horrifying a homeowner is not the endgame here. Instead, the homeowners are part of the process.

Before the episode even begins, the designer receives a brief detailing what the homeowners want from the space, and the designer has a week or so to prepare. The designer then pitches their ideas to the homeowner(s), while the judges watch. The homeowners have a say; they can reject wallpaper covered in dogs or suggest a paint color isn’t quite right. They pop into the space throughout to give feedback.

Time to prepare. Using a homeowner’s wishes to guide the design process. Getting regular feedback. What kind of crazy talk is this? But it’s what helps set The Great Interior Design competition apart.

Fun lectures from the host, mushy feedback from the judges

The judges, Daniel Hopwood and Sophie Robinson, also have thoughts, though they mostly share with each other and with the cameras. They can give sharp and precise feedback, but often have mushy priorities, and sometimes seem to want something so specific not even they can identify it. Should a designer be more creative and whimsical? Or should they be restrained and adhere themselves to the homeowner’s brief? Daniel and Sophie want both, at the same time, which seems like an impossible challenge, and often results in surprise endings based on who goes home.

In a somewhat pointless and rather American television moment, the judges rank the designers on their presentations. The feedback about the presentations is useful; that early ranking has played no role in the elimination of a contestant during any of the episodes I’ve seen. It seems to be one of those tools a production uses to rattle its contestants. Another is the mid-episode craft project: The designers are given something they have to repurpose and integrate into their rooms.

Host Tom Dyckhoff peels the proceedings away from standard reality TV fare, popping up to explain an architectural style or movement. He’s an architectural history scholar and critic, but he pops off the screen with Mel and Sue effervescence, even if he doesn’t have their puns. I’m ready for school every time he gives one of his mini-lessons, and appreciate having some knowledge to take away.

Because the episodes have, at most, four contestants, there’s a lot of time to spend with each of them. They work under time constraints, but each contestant gets help from their own carpenter and decorator. The designs they come up with do not seem amateurish, and at least in the third season (the only one I’ve seen), easily eclipse Trading Spaces rooms and rival some of the best rooms from HGTV shows.

Perhaps because I’ve been conditioned to wait for the reveal, to see if Pam will cry about her fireplace, I found the homeowners’ reactions to often be underwhelming. That room is wonderful—say something nice about it!

The editing spends very little time on the reveals, and focuses instead on the process, the judging, and the designers themselves. And they are amiable characters, easy to cheer for as they navigate both the space and the competition.

Standing in front of a Scottish castle in the third episode of season three, host Tom Dyckhoff says that it appears “sturdy enough to withstand a siege,” but points out that “this castle is one big fake, and wears its romantic military costume just for looks.”

That’s how too many redecorating shows feel: for looks. There are human facades instead of well-developed characters that create surface-level changes just for a big moment at the end of the episode. But in the Great Interior Design Challenge, the work and the people creating it get the focus they deserve.