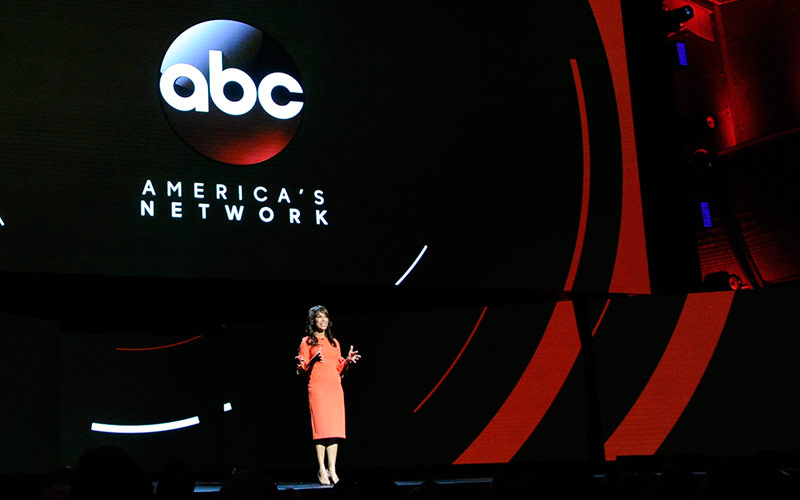 ABC Entertainment President Channing Dungey speaks to advertisers at ABC's upfront presentation in May 2018. ABC has the most reality TV shows on its prime-time schedule—more than the other networks combined. (Photo by Jeff Neira/ABC)

This fall on the major broadcast networks, there will be 11 hours of reality TV from eight different reality shows, an increase of one hour and two shows compared to last year. That means the number of fall reality TV shows has increased for the second year in a row, after falling during previous years for a low of nine hours in 2016.

There will be a total of 91.5 prime-time hours on broadcast TV, so reality TV is about 12 percent of the schedule.

Most of that is thanks to ABC, which is airing six hours of reality TV from five different shows. Three networks (NBC, Fox, CBS) each just have one reality show, while The CW has zero. (I’m not including news programming, such as Dateline, nor sports games such as football.)

This week was the upfronts for broadcast networks, where executives share their 2018-2019 programs with advertisers to get them to buy ad time in advance.

While reality TV is robust in summer and even spring, it’s not as dominant in fall:

Here are all the broadcast networks’ scheduled reality TV shows, as announced this week during their upfront presentations. Actual premiere dates will be announced later in the summer; I constantly update the latest reality TV debut schedule as dates and times are released.

Also on the Sunday night schedule is Alec Baldwin’s talk show, The Alec Baldwin Show, but while it’s unscripted, I’m not including that in the same way I don’t include CBS’ 60 Minutes or NBC’s Dateline.