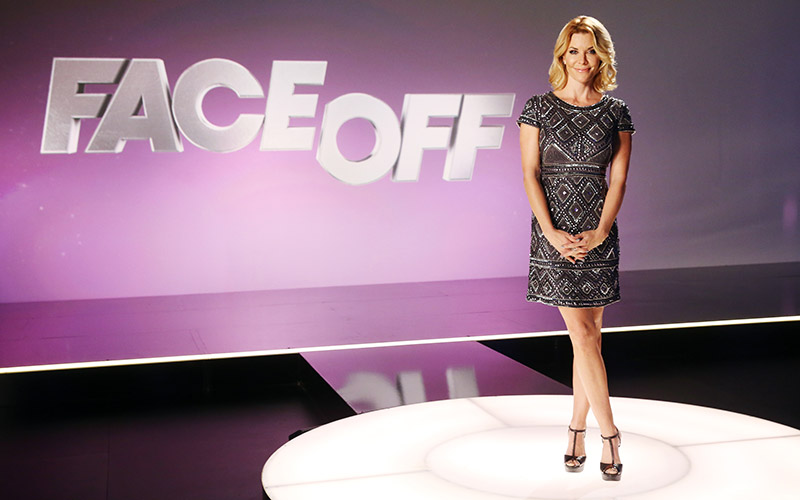 McKenzie Westmore, host of Syfy's Face Off, during season 9. (Photo by Jordin Althaus/Syfy)

Syfy has cancelled Face Off, which will air one final season starting June 5. It’s called Face Off: Battle Royale, and it’s another all-star season, just like season 11.

The show’s production is not going away quietly. Host McKenzie Westmore posted this to Instagram:

It is with a great deal of sadness and disappointment that we report #Syfy has decided #season13 will be the final season of #FaceOff. This show means the world to us at Mission Control, and we appreciate the loyal and passionate support of our viewers more than we can possibly say. Thank you to all of the artists for bravely sharing their talent with the world, the amazing models, McKenzie, Glenn, Ve, Neville, Patrick, Lois, Michael Westmore, Derek, Mary, Peter and everyone else associated with the show. It’s been an incredible run. #FaceOff returns June 5th for its final season.

The show’s production company, Mission Control Media, has been retweeting #SaveFaceOff posts, and Westmore encourages people to sign a petition to save the series. (Only 4,730 people have signed it as of 3 p.m. ET on May 9.)

Although Syfy released the teaser trailer below, they have not even produced a press release announcing the new season. It is clearly no longer a priority. (The network’s publicity team did give the trailer a day early to TV Insider, which wrote a fluffy piece that doesn’t even use any variation of the word “cancelled,” instead just referring to it being the “final” season.)

Their web site has long promised that the show “returns later this year,” but there wasn’t even a hint that this would be the last season when I asked Syfy a few weeks ago about when it might return. The show has been off the air since last August.

Syfy will have no actively airing unscripted series after Face Off’s end.