Skip to Content
Magician Michael Carbonaro after tricking an unsuspecting customer on The Carbonaro Effect. (Photo by truTV)

Four years of hidden camera magic tricks has left the star of truTV’s The Carbonaro Effect, Michael Carbonaro, with a bit of a problem. “As I get better at pulling this stuff off, I have less people to pull it off on,” he said. “It becomes harder and easier at the same time.”

The difficulty ranges from the show’s star having his cover blown to editing the show—and in our conversation, Carbonaro was candid about how he uses editing to conceal tricks, and also about accusations that the reality series is staged or uses actors.

If someone recognizes him, they stop and move on to the next person, and Carbonaro estimated that happens about one-third of the time.

But he told me he’s “still fascinated” by the people who don’t recognize him but later say they’ve seen the show.

Carbonaro has said in other interviews that he’s a fan of RuPaul’s Drag Race, so I suggested a cross-over episode, perhaps with him in full drag to disguise his identity. “Let me put it this way: I would die at the opportunity,” he said. 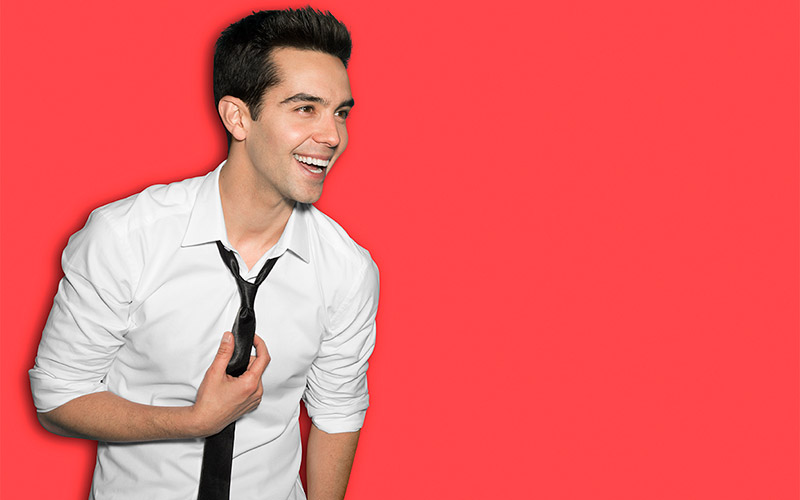 Michael Carbonaro, star of The Carbonaro Effect (Photo by truTV)

Pulling off these tricks requires more than just disguises, though. There’s a 30-person crew involved in The Carbonaro Effect (truTV, Thursdays at 9), including a team of magicians Carbonaro works with to develop tricks and props.

For the show’s first two acts, Carbonaro is usually pretending to be a retail store employee, and says he gets about four tries at each of four different tricks. The longer bits, which involve one mark in a more elaborate set-up, are attempted about six times in one day. (Special “Double Take” episodes include new footage, including some of those attempts that didn’t make it to the actual show.)

“We really don’t know how it’s going to play out,” he said. “It’s amazing that it works.”

His tricks, for lack of a better term, have gotten more complex, too. Instead of just a one-time revel, there are multiple tricks—or, as Carbonaro called them, “a number of magical moments.”

On location, there are six cameras, three of which have camera operators. The crew has to “orchestrate” ways to get people into position not only to interact with Michael, but so they can be seen clearly on camera. The crew sometimes put footprint decals on the ground, and found that people will naturally stand on them. “People will fall right into their mark,” Carbonaro said.

The crew also has to deal with bystanders. If someone starts to gawk, a crew member will gently guide them away. To keep a clear line of sight for a camera, a crew member posing as a store employee might stand near one camera and pretend to be mopping in order to encourage people to not stand in the way.

“I work really closely with producers,” Carbonaro said, including what he called “my secret dream team of magicians.”

“I have people that i work with on the show that I literally met when I was a kid at a magic camp,” he said. “There’s a camp on Long Island, where I’m from, called Tannens Magic Camp, and two of the main guys on my show—Darren Burger, who’s a magic consultant from New York, and Derek Hughes, who’s a magician and AGT finalist—I met them at camp when I was a kid.”

During pre-production, they brainstorm. “We all get together, we sit in a room, and the ideas can come from anywhere,” he said. “We might have a trick that’s really cool and then we find a place to put it.”

This season, for example, Carbonaro suggested, “let’s shoot on a farm,” and that led to a bit involving an alien encounter.

“I call them kooky weirdos, but I should call them magical geniuses, which is what they are. But we are weirdos—come on! You have to be to make up this show.”

Many reality shows are accused of being fake. The Carbonaro Effect tells us that parts of it are indeed fake, of course—after all, this is a magician pretending to be someone else, and doing magic tricks.

The show is accused of using actors and staging the responses, in part because the marks are clearly audible and viewers are convinced they’re wearing mics.

While they aren’t actors, sometimes the show’s participants are actually wearing mics—but they don’t know it.

Of getting a mic on someone, Carbonaro said, “As a magician, it’s like a reverse pick-pocket.” For the longer bits, sometimes marks are given things to wear, like a heart monitor in a gym or a jacket on a farm, that will have mics built into them.

As to other potential forms of fakery, Carbonaro was candid about the show’s editing. “The show is edited judiciously,” he said. “At any given moment, with six cameras rolling, five of them are seeing how the trick works.”

“The person who’s on the floor with me, their eyes—if I could put little cameras in their eyeballs, I’d let you watch the entire thing. Maybe I’ll strap a camera to someone’s head one season without them knowing. That’d be fun,” he said.

“So, yes, definitely, I’m editing around and showcasing what you would be going through if you were there,” he added.

That editing process means sometimes going through footage “frame by frame, to watch and see how that translates to the best magical sentence.” Timing is critical, and “we don’t want to do a split-screen,” he said, because it’s hard to split a viewer’s attention.

So sometimes, the edit will pad the footage, overalapping time from different perspectives so viewers can see more. For example, for a moment that lasts four seconds, we might see seconds 1, 2, and 3 from one camera, and then seconds 2, 3, and 4 from another. That’s “so you get the whole experience,” Carbonaro said. “It’s tiny.”

Viewers scrutinize those edits, and when they notice errors, they see evidence that the show is faking everything.

In response to one critique, showrunner Russell Arch admitted to using a pick-up shot, and explained why that was necessary.

Two years ago, a Reddit user noticed a major continuity error and accused the show of being fake, which prompted Carbonaro to respond with this video. It shows raw footage from four of the show’s cameras, and reveals that that a woman didn’t see his first attempt at the trick, so he reset and did it again.

While I find some hidden camera shows exploit their marks and make them look dumb or, worse, put them into ethically questionable and psychologically challenging situations, I’ve rarely had that sense with The Carbonaro Effect. I asked Michael Carbonaro about that, and how he and the show make sure they’re not exploiting people.

Michael told me that “the real challenge of the show” and “the line I dance on” is the one between creating a moment of joy for someone and being cruel.

Pointing out that the show “is not Scare Tactics,” he said “it has to mix that fear or charge with enchantment and curiosity. It takes the right kind of person.”

“I really do a good job. I’ve never taken somebody so far they were terribly upset,” he said. “Maybe I’m like that sarcastic person—I get away with it.”

Carbonaro said he has to be especially cautious if “someone might be put in a position of fear. Sometimes I’ll bail out, if I think someone’s way too scared.” If someone wants to leave, he’ll let them, not trying to drag out the bit or forcing them to stay.

After people have learned they’re on TV, some do decline to sign release forms.

“I’ve had people who were hiding out from their families,” Carbonaro said, while others think are worried about how they look. “It’s a vanity thing that I completely understand,” he said. “I think that’s more psychological that someone would think they were in a position where they were compromised or they’re going to look foolish. Even if they’re not.”

While they may not have chosen to watch a series of magic tricks, Carbonaro hopes that the people he performs magic on will choose to “become part of that family of people who were wondered and delighted and fooled.”