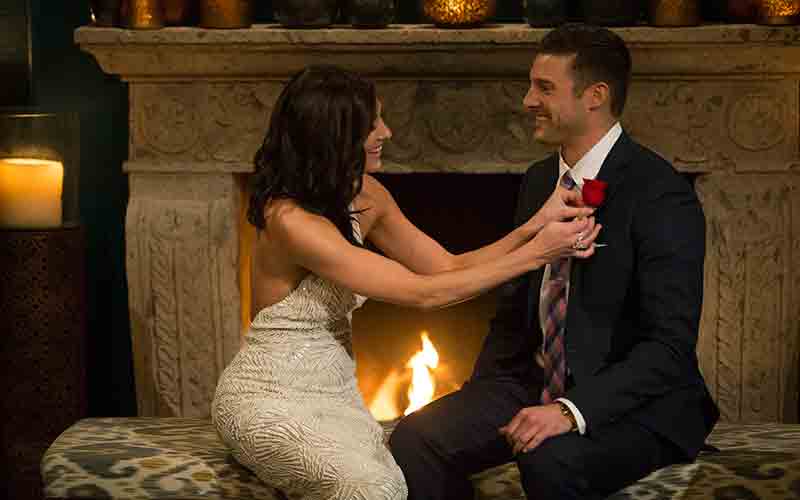 Becca Kufrin and Garrett Yrigoyen during The Bachelorette season 14 episode one. (Photo by Paul Hebert/ABC)

One of The Bachelorette contestants has released a statement apologizing for his activity on Instagram, on which he liked posts and memes he described as “hurtful, degrading, and dehumanizing.”

The story has unfolded over the past week, starting last Thursday, when Bachelor season 15 contestant Ashley Spivey posted screenshots to Twitter of Garrett Yrigoyen’s Instagram likes.

They included a post claiming Parkland shooting survivor turned activist David Hogg is a “crisis actor,” and another that shows a soldier swinging a child in a playful way but with the caption “When a kid makes it over the wall and you have to throw him back.”

One post mocks feminine-looking boys, and another is of a sign (which was added to the bottom of an official “Welcome to California” sign) that said “felons, illegals and MS13 Welcome. Democrats Need The Votes!”

Today, Garrett Yrigoyen confirmed that the Instagram account was his and that he liked all of those posts in an extended apology he issued today. He wrote the following and posted it to a new Instagram account over four screenshots:

“To those who I have hurt and offended:

This is all new to me. I went on the Bachelorette for the adventure and possibility of falling in love, not fame. I did not know what to expect once the show aired.

I am sorry to those who I offended, and I also take full responsibility for my “likes” on Instagram that were hurtful and offensive. garrett_yrigs12 was my former Instagram handle and I decided to take it down and start fresh because I have learned an extremely valuable lesson and am taking steps to grow, become more educated, and be a better version of myself. I am not perfect, and I will never be anywhere close, but now I will always be more informed and aware of what I am liking and supporting, not just on Instagram, but in life.

I never realized the power behind a mindless double tap on Instagram and how it bears so much weight on people’s lives. I did not mean any harm by any of it. My Instagram “likes” were not a true reflection of me and my morals.

I am not the negative labels people are associating with me. For those who do know me, I am a sincere, genuine, loving, light-hearted, open-minded and non-judgemental individual. I like to make new friends with anyone I meet and want everyone to find their happiness. I love to laugh often and enjoy seeing others do the same. I hope that some day you can get to know the real me and the man that I am.

Let my mistakes be a lesson for those who mindlessly double tap images, memes, and videos on any social media content that could be many things including hurtful, degrading, and dehumanizing. I do not want my social media to define who I am, and I will take better care moving forward to support all walks of life. Again, I sincerely apologize and am sorry for any hurt, damage, or offense I may have caused.

Why this matters now

The rest of this story includes information about what happens during The Bachelorette season 14.

It’s not just because he received the first impression rose on last Monday’s season premiere, nor is it because he’s just a “frontrunner,” as THR said.

It’s because Garrett is now engaged to Becca, and thus wins this season, if The Bachelorette has winners. That means there are more than three months of television about to air that will develop their relationship and lead to a finale.

The outcome is clear because TMZ posted photos taken after the engagement in the Maldives, and while the site didn’t identify Garrett, it was clear to viewers and fans.

Reality Steve pointed out “The pictures are legit, she’s engaged to Garrett, and that’s the end of the story, but noted that TMZ’s story already prompted conspiracy theories (“there are those who’ve emailed thinking this is a conspiracy, that’s not the final rose ceremony, this was planted”).

Steve added, “for the first time in 36 seasons, paparazzi got pics and released them of the final rose ceremony before the show even started, and yet there are STILL some that refuse to believe it.”

“I reached out to ABC, which airs ‘The Bachelorette,’ and Warner Bros., which produces the show, to see if either had a response to Garrett allegedly liking sexist, transphobic and anti-immigrant memes. Both said they will not be commenting.”

But there have now been very clear responses, and they seem like major damage control, trying to rescue a season that just started.

“It’s an alleged account. And it’s likes, it’s not things he’s actually posted, which are things you actually can’t scrub for unless the person has a certain number of followers. … Obviously we want to know every single possible thing about these contestants. So, we’re working harder. I mean, it is such a new frontier, social media, and I think it’s important for us to really be on top of this stuff, and certainly we never want a situation like what happened last year with Lee [Garrett] to ever happen again. … We are here telling everybody we are putting the best men and women forward for the lead to date, so I think we want to make sure we are absolutely doing that.”

“I want viewers to be open to everyone, and I want them to go through this season with me and watch my love story unfold with all of these men… because that’s how I went into this journey. I did things in the past that I’m sure wasn’t the best thing, but I just want people to stay open-minded to everyone.”

In other words: please keep watching, even if I’ve made a terrible, terrible mistake.

Update: This story was updated to remove a potential spoiler from the headline and lead. Read more here.