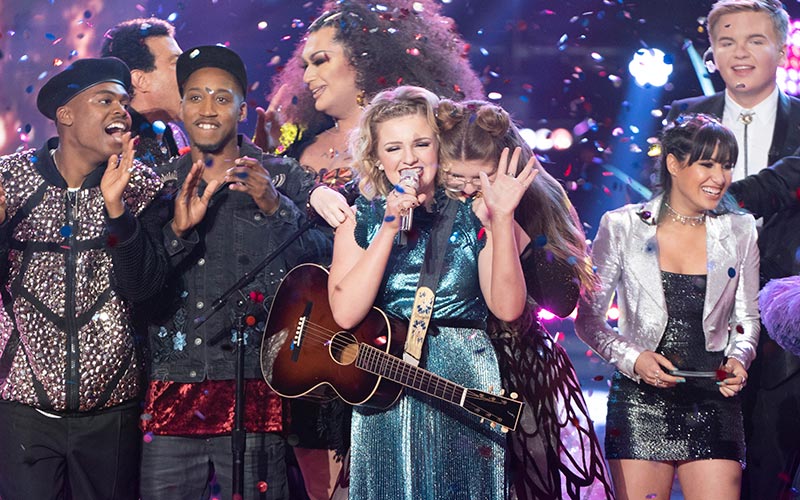 American Idol season 16 winner Maddie Poppe surrounded by her fellow competitors during the final moments of the season. (Photo by Eric McCandless/ABC)

The right person won American Idol season 16, at least in my mind: Maddie Poppe is the most interesting, in part because she’s the finalist who was most like “whatever, I’ll do my thing.”

The two finalists, Maddie and Caleb Lee Hutchinson, were both previously rejected by coaches on The Voice during the blind auditions: Maddie was on season 10, and Caleb was on season 9.

The final few moments of the show were super-charming, and a perfect cap to the season. Maddie couldn’t get through her song, so the other finalists raced on stage and surrounded her, and passed the mic around and sang bits of the lyrics as they all hugged. They clearly formed strong bonds with each other.

Speaking of bonds: The big finale surprise was that Maddie and Caleb are in a relationship, which is cute, though Ryan Seacrest took it a beat too far. And the biggest surprise is that Idol didn’t milk that all season and make it a Thing, which I suspect the Fox version might have done.

For two hours of filler, the most padded an episode has been all season, it was very watchable, from the duets (Ada Vox and Patti LaBelle, Nick Jonas and Jurnee) to the random bits. LeAnn Rimes surprising the sisters was particularly cute.

Ryan Seacrest’s preview of the filler—walking past it all backstage at the very start of the show—was an interesting choice, and probably dampened some of it, like the alpaca reveal.

The hometown visits fit nicely into the finale.

Who the fuck is that frog and what did it do with Kermit? (I do know the answer: Kermit’s voice actor, Steve Whitmire, was fired, apparently for defending the character against the bastardization that was happening on the short-lived ABC sitcom. Matt Vogel replaced him. Matt Vogel does not do Kermit well.)

Caleb Lee Hutchinson’s impression of Lionel Richie is terrific and uncanny, and he should take it on tour.

ABC is calling its next season “American Idol season two.” Nope. Never. Season two was Ruben Studdard and Clay Aiken and already happened and you don’t just get to reset numbering or pretend past seasons didn’t happen. Next season is American Idol season 17, and I’m looking forward to it.